READ THIS NEXT
Trending: Reebok’s plant-based shoe and Sizzler’s flame-out

Absolut Vodka is launching a new global campaign – "Create a better tomorrow tonight" – in an attempt to reconnect with the progressive values of Swedish founder Lars Olsson Smith and the heritage of a brand that has been produced on the same farmland in Sweden since 1879.

Absolut, bought by French group Pernod Ricard in 2008, has lost touch with its roots over the last decade, and become more of a generic global vodka brand. In the U.S., it has been losing share to newer craft vodkas such as Titos and New Amsterdam.

Absolut's U.S. sales fell by 1.6% to $131 million in the 52 weeks ending April 16, not including bar sales, according to IRI. The brand's dollar market share is now 6.7%, putting it behind Smirnoff at 16.6% and Titos at 9.2%. Globally, Absolut claims to enjoy "positive growth," driven mostly by Europe and Latin America.

The new campaign from Bartle Bogle Hegarty London is spearheaded by a film called "Equal Love," which shows a diverse cast passionately passing a kiss from one person to the next -- all of different sexes, ages and races.

Gaia Gilardini, Absolut's global brand director, spoke to Ad Age about the new positioning for the brand and how it highlights the values of its founder.

What does "a better tomorrow" look like for your audience?
We know that there is a young generation who, despite a lot of changes going on in the world, are very optimistic. There is a big return to core values such as spending time and doing things with a close group of friends, whereas some years ago it was much more the big night out, clubbing, or big events.

What does this look like at Absolut?
The Absolut global leadership team is 50-50 men and women – we are really proud of that. We have the lowest energy consumption per unit among the large distilleries; we have climate-neutral production; we are shifting to bio-fuel for all our local transport; and we are the only carbon monoxide-neutral vodka. Waste is turned into agricultural feed and we create sparkling water from our CO2 emissions. We've always made choices to contribute to a more sustainable production. This is unique but we haven't talked about it.

A lot of advertising right now seems geared toward the LGBT community. Are you jumping on a bandwagon?
We have a lot of credibility in this space. We've been supporting the LGBT community for the past 35 years. In 1981 we were the first brand to buy ads in LGBT magazines, at a time when no other brand would do it because they were afraid of losing their broader target audience. We've collaborated with Andy Warhol and Tom Ford; and in 2003 with Gilbert Baker [designer of the rainbow flag], we created a pride flag that extended from the Gulf of Mexico to the Atlantic Ocean.

What are you trying to achieve with the new film?
It's not just an LGBT film. The endless kiss mechanic is a metaphor for inclusivity. It brings to life a broader value of expression and of loving who you choose. The pairings go beyond sexual preference, which is just one of the areas.

Is this in response to competition from newer craft vodkas?
Very few people know that every single bottle of Absolut around the whole world is produced from the same source in Sweden. It's more crafted than you could ever imagine. We will start communicating this a bit more. There are a lot of things that we also do in terms of sustainability that we haven't communicated because that's how it has always been done. There are some really interesting stories that it's probably time to bring out a bit more. The younger generation is really interested as well. 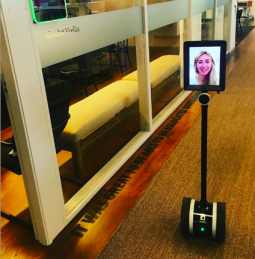 And what about you personally?
I am based in London. I go to Sweden two or three days a week and I have a little robot as well. It's called the G-Bot (because my name's Gaia) and it's an iPad on wheels that goes around the Stockholm office. I can control it from my phone and my computer to make it taller or shorter and to send it to join meetings. It's been accessorized with a scarf and a bag – but we've not started with wigs yet.