Ad Age at 90: A toast to disruption | Ad Age
Skip to main content

Ad Age at 90: A toast to disruption

As Ad Age enters its tenth decade, a look back at our original front page
READ THIS NEXT
As Verizon tries to offload HuffPost, a history lesson from Rupert Murdoch 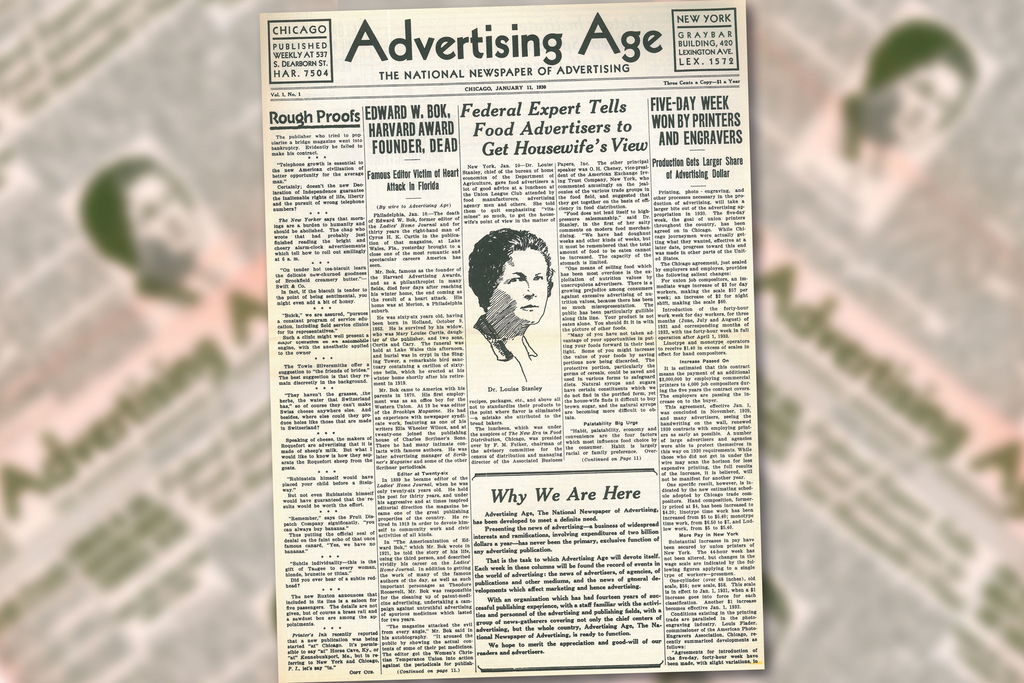 Advertising Age published its first issue on January 11, 1930—90 years ago. In retrospect, it seems like an odd time to have debuted a publication devoted to advertising and marketing: The Roaring Twenties had just come to a screeching halt with a stock market collapse that ushered in the Great Depression. Between 1929 and the low point of the Depression, consumer spending would plummet 41 percent. So, sure, let’s launch a magazine devoted to the marketing of goods and services.

And yet, in many respects the timing was auspicious. The rise of radio is one of the most remarkable advertising stories of the 1930s (if not the century). With the flick of a wrist, a marketer would eventually be able to reach the entire country in real time—and the audience didn’t even have to know how to read. In 1929 the country’s two radio networks had combined revenue of $18.7 million. By 1939, that revenue would rise to approximately $80 million, according to Ad Age’s own Datacenter. (Print advertising in 1929, by comparison, stood at $1 billion in the U.S.)

Advertising Age—we rebranded to Ad Age in 2017—was not the first trade publication devoted to the industry. There was Printers’ Ink and Advertising & Selling.

But Advertising Age’s mission would be to go deeper.

“Each week in these columns will be found the record of events in the world of advertising: the news of advertisers, of agencies, of publications and other mediums, and the news of general developments which affect marketing and hence advertising,” reads the mission statement on our first front page. If I were to write Ad Age’s mission statement at the dawn of its 91st year, I don’t think I could do much better.

Of course, “other mediums” provided a nice hedge. Since 1930 Ad Age has covered the rise of new media over and over again: Radio went from essentially zero to 55 percent household penetration in 12 years. TV would go from zero to 55 percent penetration in six years. Cable? From 6 percent to 50 percent in 19 years. Broadband internet penetration soared from 1.7 percent to 54 percent in eight years. Today there’s OTT, AI, OOH, social, experiential, d-to-c, oh my.

We might not be mired in a global depression as 2020 clunks into gear, but it still would be an understatement to say these are trying times. So maybe it’s a little comforting to know that, in many respects, disruption has been the norm of the past 90 years, not the exception. So. Here’s to 90 more?