‘90 Years of Ad Age’ flashes back to 1977
READ THIS NEXT
As Verizon tries to offload HuffPost, a history lesson from Rupert Murdoch 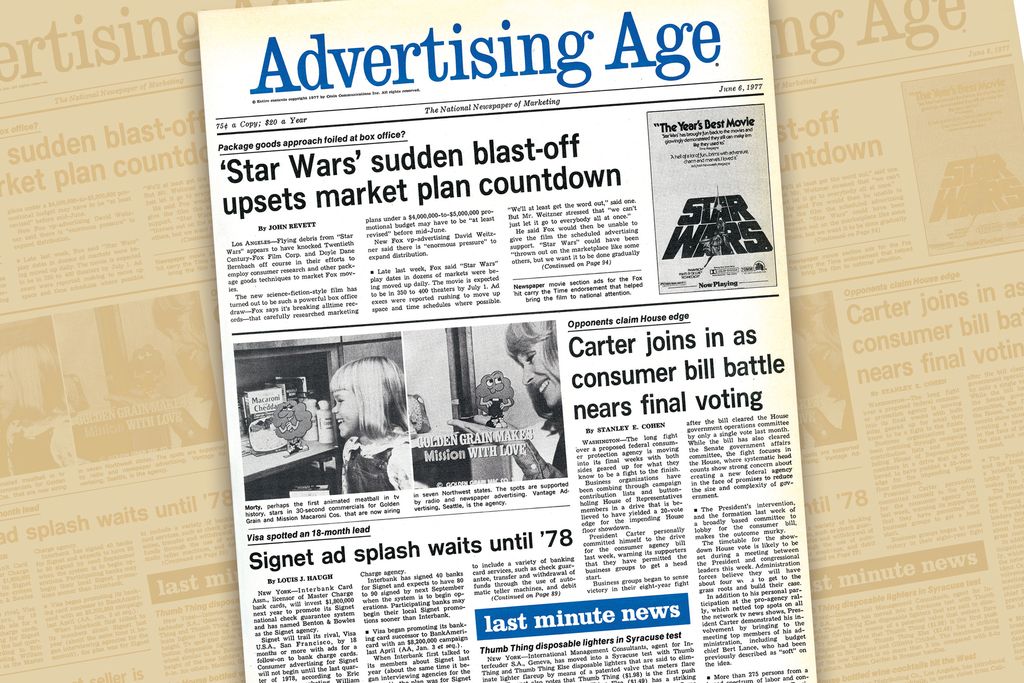 Editor’s note: To mark our 90th year—Ad Age launched as Advertising Age in 1930—we’re diving deep into our archives as part of an ongoing series we’re calling 90 Years of Ad Age.

A long time ago—the summer of 1977—in a marketing galaxy far, far away, “Star Wars” director George Lucas was bound and determined to assume the auteur role for the advertising surrounding his creation. And the studio and agency folks he was working with weren’t exactly thrilled about that.

Lucas’ space opera had been given a limited theatrical release starting on May 25 of that year, but it was such an instant sensation that Fox and its agency DDB were forced to rip up their playbook. Ad Age reported on efforts to quickly scale the exhibition schedule—“the movie is expected to be in 350 to 400 theaters by July 1”—and that “ad execs were rushing” to book more ad space and time to support a wide release. David Weitzner, then Fox’s VP of advertising, sounded a bit defeated about the mad scramble. “Star Wars,” he told Revett, could have been “thrown out on the marketplace like some others, but we want it to be done gradually in a sophisticated way.”

But of course the marketplace ended up driving the marketing, instead of the other way around, and all the studio and agency suits had to defer not only to ecstatic theatergoers, but to George Lucas himself.

The then-33-year-old director had just one previous hit under his belt—the 1973 coming-of-age comedy “American Graffti”—and it seems not everyone was ready to buy into his “Star Wars” marketing vision. “Mr. Lucas’ strong position on how the film was to be promoted has given rise to rumors—denied by DDB—that the agency is considering quitting the Fox account because of interference from the writer-director and the studio hierarchy,” Revett reported.

An even more delicious detail from the 1977 Ad Age report has to do with the notes Lucas got regarding the product itself from the marketing geniuses surrounding him: “The writer-director ‘flatly rejected’ research findings regarding theme and name, according to a source who agreed with the rejection,” Revett wrote. “He said Mr. Lucas insisted on ‘Star Wars’ despite tests among consumers that showed strong disfavor—especially among women—with the word ‘Wars.’”

Fast forward to 2020. Just as Fox and DDB ultimately had to adapt to disruption back in 1977, Lucasfilm owner Disney is having to adjust to today’s new normal in marketing and rolling out “Star Wars” (“Star Kerfuffle”? “Star Disagreement”?).

And we do mean today—the date selected by Disney’s Disney+ to start streaming a nine-film Skywalker binge-pack, including “Star Wars: The Rise of Skywalker,” which is getting its release two months ahead of schedule to satiate ravenous fans sheltering at home.

Now, glance above and take note of the date on this post.

All together now: “May the Fourth be with you.”