Americans are building back their confidence in travel as the U.S. ramps up efforts to get on top of the pandemic. In turn, that's brought some positive changes to travel demand in the last few months, especially for domestic tourism and air travel, according to new data from YouGov.

In order to help travel marketers measure the pulse of the rapid change in the travel industry as it recovers, YouGov has delved into the latest consumer trends among key U.S. travel audiences. These are some of the biggest questions facing travel marketers today:

Local tourism on the rise

As the U.S. accelerated its vaccine administration efforts, domestic demand for travel has now reached its highest point in the past six months, according to data from YouGov Global Travel Profiles, which tracks and measures consumer attitudes and behaviors about travel in 25 countries.

What factors are driving vacationers' choices? In April 2021, more than two in five U.S. adults (44%) said they planned to vacation in the U.S. at some point in the next 12 months, showing a 10-point increase in domestic demand since November 2020 (34%). This suggests vacations will be closer to home for many this year — likely taking the form of road trips and staycations — and this intention to holiday domestically will be critical to the factors that drive bookings among potential travelers in 2021.

When asked about their motivations in booking a vacation destination in general, Americans who plan on taking a trip in the U.S. this year say overall value for money is their most important factor (42%). It's important to note here that while consumers are certainly thinking about the price of a vacation, it's more about whether the price matches the worth of the trip, not simply the dollar cost.

Our research reveals low costs — for example, cheap flights or hotels — rank only as the fifth most important factor among people planning to take a domestic trip this year (29%). This consumer willingness to travel, if the bill fits the experience, will be heartening news for many travel brands, especially ones that are able to position themselves as worth the money.

The great outdoors may be a big feature for many travelers this year. According to research conducted in April, more than a third of U.S. adults (36%) who plan to take a vacation in the U.S. this year say they chose a destination based on its natural beauty. Loved ones are an equally important draw for vacationers this year, with 36% saying that having friends and family nearby will influence their decision to vacation somewhere.

U.S. demand for air travel is growing but still not back to early 2020 levels. Data from YouGov BrandIndex, which measures the health and consideration for brands and sectors on a daily basis, shows an uptick in air travel intentions that began in March. By the end of April, 31% of U.S. adults said they planned to book a flight in the next year.

And air travel intention increased among all age groups. Americans seem more comfortable with booking travel, even older Americans who expressed the lowest level of intention to book air travel throughout the pandemic. As an increasing number of older Americans received their COVID-19 vaccines, the share of Americans aged 50 and older and willing to book a flight increased by seven points from March to April, from 18% to 25%.

Compared to other groups, younger Americans expressed a higher level of air travel intention throughout the last year, and their likelihood to book flights increased over the last few months. In April 44% of U.S. adults aged 18-34 say they'll likely book a flight in the next 12 months.

Which places catch the eye of potential air travelers? New YouGov data reveals the top places people are considering for their next vacation, with U.S.-based destinations such as Florida (32%), New York (32%) and California (28%) being popular destinations among those looking to book a flight in the next year. This reinforces the data we revealed earlier about preferences for domestic travel. Roughly a third of this audience says they would consider traveling to each of these states, according to data from YouGov DestinationIndex.

Hawaiian destinations are also popular with this audience, and approximately one in five potential air travelers say they would consider traveling to the state of Hawaii (22%), and specifically Oahu (20%) and the Big Island of Hawaii (17%).

Mexico takes the top spot among this audience as the international destination with the highest level of consideration. Further research into this audience of potential air travelers reveals that their favorite type of leisure trip are beach vacations (69% say this versus 49% of Americans overall). The desire for beach vacations explains why destinations such as Mexico, Hawaii and Florida are high on the list of potential vacation destinations.

Americans are thinking of life beyond COVID-19 and travel marketers will need to understand consumers' appetite for different types of advertising, from ads delivered on digital devices to those found out-of-home.

Peoples’ mindset and the things they pay attention to have changed a great deal in the past year. A YouGov study notes that consumers across the world spent more time in front of screens amid the lockdowns and stay-at-home orders. So where should travel marketers be spending their budgets right now?

Looking specifically at consumers in April who said they were likely to fly at some point in the next year, Facebook was the leading social media platform they spent time on within the last 30 days (64% overall versus 63% of U.S. adults). But this overall group of potential air travelers tend to be heavier users of Instagram, LinkedIn and Twitter than Americans overall, indicating that brands may get more value from these channels.

Another effect of the vaccination effort is that Americans are likely to spend a greater amount of time outside and away from their homes this summer compared with last year, exposing them to higher levels of out-of-home advertising. Fortunately for travel brands, several of their key audiences prove attentive and receptive to ads found in public spaces.

Take this group of potential air travelers: They’re more likely to notice ads such as those found on taxis (48% versus 29% of all U.S. adults), train stations (47% versus 30%), airports (55% versus 40%) and public transport (54% versus 40%). They’re also significantly more likely to say they trust out-of-home advertising such as those found on posters and billboards (42% versus 29%).

It’s evident that consumers are interested in traveling again and if marketers’ brands are to really resonate with travelers, they’ll need the most up-to-date data to inform their ad investment strategies. With domestic demand on the rise and air travel moving in an overall positive direction, it’s reassuring to see opportunities to engage with consumers cropping up again. YouGov will continue to monitor the post-pandemic travel landscape. For more analysis on the travel industry, read YouGov’s latest stories and reports, or sign up for YouGov’s travel and newsletter to receive free insights.

YouGov is an international research data and analytics group. Our products and services help the world’s most recognized brands, media owners and agencies to explore, plan, activate, and track better marketing activities. As pioneers of online market research, we have been building an ever-growing source of connected consumer data for the past twenty years. Creating the richest and most complete understanding of your customers’ complex lives. We call it Living Data.

Imagine if you could know what 17 million+ people in over 55 markets were thinking now? Or last week? And do so again and again? That's why we're different. Rather than commissioned research that's already out-of-date by the time it reaches your inbox, our platform gives you access to data that's alive. So, no matter how quickly things change, you're always in the know. 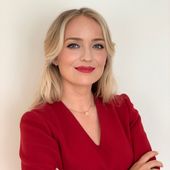 Eva Stewart is the Global Sector Head for Travel & Tourism at YouGov, a global public opinion and data group, where she is leading product innovation, international partnerships and business growth. She has over 14 years’ experience as a business strategist with a passion for bringing market and consumer insights, cutting-edge analytics and consulting services to private and public organisations globally.

Eva holds a BA in Economics & Political Science from Greenwich University, UK and an MSc in International Management from King’s College London