At first, one wonders how Jeffrey L. Cruikshank and Arthur W. Schultz ever managed to write "The Man Who Sold America: The Amazing (but True!) Story of Albert D. Lasker and the Creation of the Advertising Century," when the man himself was a cipher during his own lifetime and is largely unknown today.

But then you wonder how to write a review of this admirable and well-written biography without discussing the man himself? 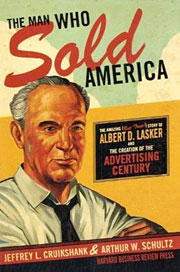 So let's start by recapping the highlights: He discovered two of the most important creatives of all time (John E. Kennedy and Claude C. Hopkins), and revolutionized the advertising industry by the time he was 30. He was deeply involved in the Leo Frank case, was majority owner of the Chicago Cubs, helped reorganize baseball after the Black Sox scandal, helped get a president elected, ran the United States Shipping Board, and was a key player in the invention of the soap opera, in the launch of Kotex and Kleenex and Sunkist, and in the transformation of political campaigns. And, when he dissolved his agency, Lord & Thomas, in 1946, he created the iconic Foote Cone & Belding (the "FCB" of " DraftFCB") and then spent the last decade of his life donating the substantial sums of money (and marketing expertise) he'd accrued to galvanize such causes as birth control (inventing the name "Planned Parenthood") and cancer (renaming "The American Society for the Control of Cancer" the "American Cancer Society"), finally establishing the Lasker Award -- often called the "American Nobel prize."

And what have you done lately?

And yet, he was a man who worked in the background -- and I find this admirable, actually -- feeling that the work, and clients' products, were the stars. Believing that the smart advertising man was the one who affected change by operating behind the scenes.

So how do Cruikshank and Schultz do it? Sometimes, frankly, they don't, writing instead about the event as Lasker slips into that background.

But when he does dominate the narrative -- as he does in the sections detailing his introduction to and rise within advertising -- he and the book really come to life. Indeed, their retelling of how he discovered Kennedy (or perhaps, how Kennedy discovered him) and how Lasker hired and worked with Hopkins -- are gems that should be required reading by anyone in advertising.

What emerges is a man whose insatiable curiosity drove him his whole life; who worked ridiculously long hours (which may have been a symptom of a manic disorder); who was notoriously improvisatory -- once hopping a train in the middle of the night to pitch a potential client; who was resourceful -- repeating a pitch in German when he discovered it was the client's birth language; and who, at least early in his career, had a remarkable ability to recognize talent and identify opportunities that others had overlooked.

If for no other reason than bringing this story to us, Cruikshank and Schultz deserve our thanks. There are so few biographies of Lasker (his own unpublished memoir is self-mythologizing, and the volume published after his death by Gunther is inconsistent), and this book admirably fills that void. (Though one is left wondering about Lasker's intentions as head of the Shipping Board, or the extent of his influence in the Harding administration, or his real involvement in the destruction of the Upton Sinclair gubernatorial campaign.)

None of that diminishes, however, the valuable lessons to be learned from the life -- and this excellent biography -- of Albert Lasker.

First: Be curious. For Lasker, advertising was an expression of his curiosity -- how do you sell to people when you are not in the room with them? What motivates them to give you their money? Interestingly, it seems once he'd answered this question to his satisfaction -- which Kennedy quantified as "Salesmanship in Print" -- he was free to be curious elsewhere.

And second, there's more to life than ads. Civic issues, sport, politics, medicine, art -- all felt Lasker's influence in one way or another. Indeed, Lasker often said he devoted more and more time to charitable causes late in his life, in order to feel he had done something "meaningful." Albert Lasker has many legacies. Not only does "The Man Who Sold America" catalog them for an ignorant nation, it may prove to be the most lasting of them all.

ABOUT THE AUTHOR
Martin Bihl is creative director-founder at 7419. You can contact him at [email protected]