Spot for Soul EV Is Retrograde in All the Wrong Ways

I've always liked Kia's hamster spots. Even when they teamed up with LMFAO. Even when they caved into body shaming and shed a ton of weight -- with a backing soundtrack from Lady "Love Yourself for What You Are" Gaga. Even if we always suspected they were something worse than hipsters.

But their latest outing is a bit too much. And not only because they're now backed by Maroon 5. I mean, really. Going from Black Sheep's "The Choice Is Yours" to Maroon 5's "Animals" is downgrade enough. But this spot wasn't content with a questionable musical selection. In fact, the questions start piling up from the get-go. 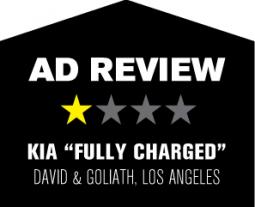 Let's start from the premise that these ads take place in a world where hamster-people exist. OK. We all on the same page? Let's go.

Question 1: There are still pet hamsters in this universe? Because, seriously, there's a hamster-size hamster rolling around in a hamster ball in the lab. I had a sudden flashback to being a wee lad and realizing how monumentally screwed up it was that Mickey Mouse was friends with Goofy and owned a dog. (And before you try to claim Goofy wasn't a dog, his original name was Dippy Dawg.) How did Goofy feel about that?

Question 2: Is that Mr. Frobinson of Sprint Framily fame in the hamster ball? He's about to be unemployed, it seems, so maybe he was in the office applying for work.

But, no, it's not a ridiculous hamster voiced by Andrew Dice Clay. After a lab accident, it turns out that the hamster in the ball is a sexy female hamster.

Question 3: Wait. Did our dude hamsters own this female hamster, which was kept in a ball?

Seriously. Anyone have answers?

Question 4: Are all pet hamsters in this universe sexy female hamsters?

Turns out, possibly yes, because our dude hamsters rush to the nearest pet store where they scoop up a dozen or so pet hamsters. For a brief moment you tell yourself this might turn out OK, this might be about setting the other guys free, a sort of "Dawn of the Planet of the Hamsters" -- complete with an origins story of the dude Hamsters as some sort of Teenage Mutant Ninja Hamsters.

But all of the hamsters brought back to the lab and zapped with the electric ray turn out to be sexy female hamsters who want nothing more than to dance with the nerdy dude hamsters.

Question 5: Wait, did they gain all their weight back? Are they on a yo-yo diet?

Possibly. In the press release David & Goliath Chief Creative Officer Colin Jeffery (who also directed the ad) says, "To suit their smart new ride, the hamsters started hitting the books instead of the gym. Smart is the new sexy, and the hamsters are using their wits, and a fortuitous lab accident, to their advantage."

Question 6: So, the best way to advertise a futuristic electric car is with three techno nerds creating hot women in a lab for a dance party. Was this ad funded by a Silicon Valley VC firm?

I'm not one to cry "sexist!" at the drop of a hat. Hell, a lot of people consider me a knuckle-dragger. But, boy, did this ad make my inner Jezebel cringe.

The fact is we're living in a time when some pretty major marketers, from P&G to Unilver to Verizon, are making a point to run advertising that builds up women and girls.

That's not to say that the boys can't still have fun. And I think there are some companies in today's marketplace who are stretching so hard to connect their brands to women's issues that they come off as pathetic or cynical or both.

But considering this is running during MTV's VMA Show and that the target demographic is also being treated to efforts from the likes of Old Navy, which put young women front and center as smart, scientific-minded protagonists, it seems a bit retrograde -- and even insulting to male nerds if you think about it -- to go the "Weird Science" route.