Internet use is already essentially universal among the affluent, with 98% going online. The surprising finding from the 2011 Ipsos Mendelsohn Affluent survey is that in the past year alone, affluent internet use rose about 20%, to more than 30 hours in a typical week. Ownership of devices that serve as on-ramps to the connected world rose significantly among the affluent as well: ownership of smartphones rose by a third, ownership of e-readers nearly tripled, and ownership of tablets more than quadrupled.

The Ipsos Mendelsohn Affluent Survey defines Affluents as adults aged 18+ living in households with at least $100,000 in annual household income, our study reflects 58.5 million Affluents. Although they are fewer than one-in-four Americans by number, they disproportionately account for most of the income, most of the net worth, and, in many categories, most of the consumer spending in the U.S. 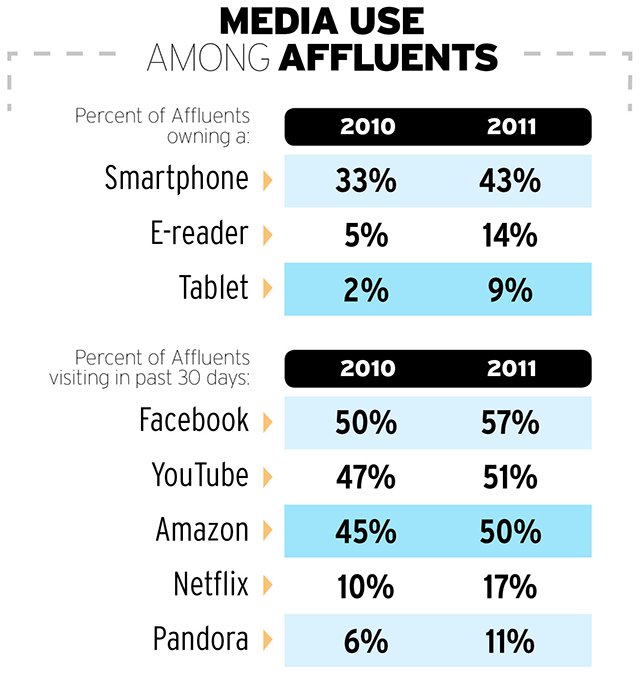 Among the many topics measured, the study looks at past-30-day visitation of more than 300 specific websites, and reveals the growing hunger for entertainment, social networking, and shopping. In fact, much of the growth in internet use stems from a growing use of well-known brands in these categories, including Facebook, YouTube, Amazon, Netflix, and Pandora. Given its reputation of fostering a long-tailed world of niche brands, niche products, and niche interests, the internet, it should be noted, is also providing some of the few remaining "universal" experiences in affluent life. As we saw, 98% are online, and we observe similar "near-universal" numbers for past-30-day use of a search engine (95%), online purchasing in the past year (90%), and so on.

As we examine our 2011 data, what is particularly interesting, besides what's up (internet use) is "what's not down" -- which is essentially every other form of media consumption. Our measures of print use remain essentially unchanged from 2010: 82% read at least one of the 152 publications we measure, reflecting an audience of almost 48 million affluent adults, who on average read more than six different publication titles. Television shows a similar pattern of near-universal and relatively stable use, with most key metrics unchanged from 2010: 98% watched TV in the past seven days, and 94% receive cable/satellite signals, while averaging more than 17 hours a week of television watched.

Media use, clearly, is not a zero-sum game: more time online does not necessarily translate to less time in other media.

Instead of a stable interest in media, in which rising internet use siphons off time spent with traditional media, we are seeing real growth in the hunger for content and connectivity among the affluent. The results are reminiscent of the old saying about a rising tide floating all boats (which, interestingly, was a phrase popularized by President Kennedy as he attempted to rally support for cutting federal income taxes on the affluent and wealthy). This rising tide of media interest may not raise all boats equally -- much of it gets funneled into internet-based media use -- and it may not be universally driving a growth in traditional media. But it is clear that consuming more media and more entertainment, in a sense, makes Affluents hungry for still more, rather than satiating their need. What better news could anyone in the media industry hope for?

ABOUT THE AUTHOR
Bob Shullman and Stephen Kraus are president and chief research and insights officer of Ipsos Mendelsohn, respectively. The Ipsos Mendelshon Affluent Study has looked at trends impacting this demographic for 35 years. The Affluency column appears monthly on AdAgeStat.