Prettybird Is Creativity's 2015 Production Company of the Year

Shop Tops the A-List With Diverse Oeuvre That Soars, From the Super Bowl to Twitch
READ THIS NEXT
Keith Cartwright opens new WPP-backed agency bearing his name 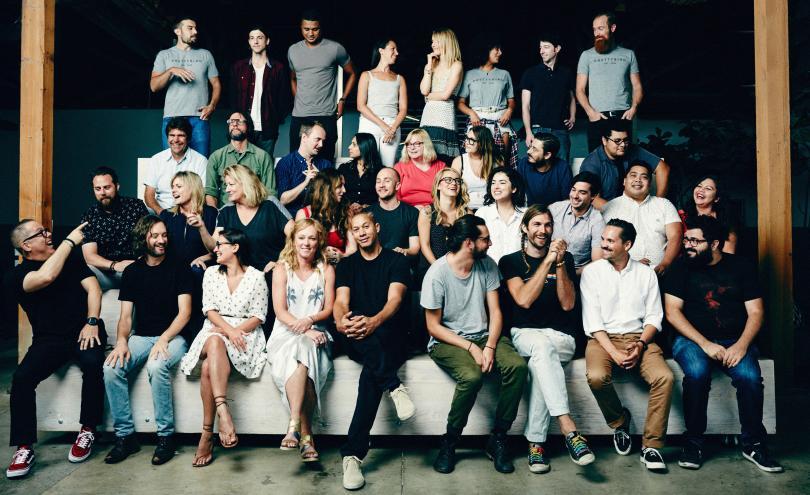 The Prettybird Team, with founders Kerstin Emhoff and Paul Hunter seated fourth and fifth from left in front row.
Credit:

Over the past year, one shop in particular stands out for doing both. It seemed as if everywhere you turned, Prettybird was there. Founded in 2007 by top director Paul Hunter and industry vet Kerstin Emhoff, it tackled the surliest, most head-scratching production terrain while finessing more traditional, established content forms.

Director Max Malkin put snooty craft beer drinkers in their place in an AB InBev spot from Anomaly touting Bud as the king of "macro" beers, and directors Tim Heidecker and Eric Wareheim, collectively known as simply Tim & Eric, held arguably the game's most over-the-top dance party in a hilarious ad for Loctite via Fallon Minneapolis.

The company's longer-form content shone too: GE's faux infomercial starring actor Jeff Goldblum, also directed by Messrs. Heidecker and Wareheim, was the veritable pop-culture hit advertisers long for -- and it even sold more than a few lightbulbs.

Along with CAA Marketing, Prettybird also helped pull Entourage's Ari Gold out of retirement for a cross-promotion short for the Entourage feature film and Cadillac. And Mr. Hunter added another masterpiece to his music video oeuvre: the tear-inducing, breathtaking video for Pharrell's "Freedom," created in partnership with Apple Music.

The shop didn't shy away from tricky production turf. For Wieden & Kennedy, Prettybird directing team "the Daniels," also known as Daniel Kwan and Daniel Sheinert, one of the freshest teams on the scene, worked hand-in-hand to create "Spring Is Weird." Gap's 12-part love story unfolded in 15-second bits on Instagram, while showing off some nice duds, of course.

Prettybird Director Bill Rainey also teamed with the agency to go where few brands had gone before: gamer streaming platform Twitch. On behalf of Old Spice, the push invited players to command a man to do whatever they asked of him in real time over three days in the woods. Director Matt Piedmont helmed a "series" of his own: General Mills' five-part "cereal" opera for French Toast Crunch, which re-enacted daytime drama's finest soap moments on a tiny scale.

Director Hal Kirkland was behind the camera for Coca-Cola's two-sided tale for Mother's Day via David, "Inseparable." The moving digital campaign invited audiences to toggle back and forth between the viewpoints of mom and daughter. Meanwhile, Director Melina Matsoukas helmed an ambitious experiential-meets-film campaign with Vice's in-house creative agency Virtue and Absolut. It involved creating a series of creative and tech-driven nightlife events in top cities around the world, which were then captured on film.

Meanwhile, the company produced more innovative work from Vania Heymann, the multi-talented artist named to the 2014 Creativity 50 for telling tales as diverse as the Bob Dylan "Like a Rolling Stone" interactive music video and the insightful, laugh-out-loud short film "Walking," about a man's mental madness as he competes for sidewalk domination with a fellow pedestrian. He brought more innovation to music videos on the crowdsourced film for Keys N Krates and Canadian telecom provider Fido with Vice agency Virtue. Billed as the "first mobile music video," it leveraged geolocation to create a personalized experience for viewers that changed with each viewing.

Nick Setounski, head of production at Wieden & Kennedy, New York, considers Prettybird one of the agency's "strongest partners." Both director and producer-wise, Prettybird is not afraid to tackle tricky, complicated productions. The team is "forward-thinking and genuinely excited by the opportunities created in our industry. You can't necessarily say that about a lot of production companies who are annoyed by the messiness of today's media world. These guys embrace it."

The Gap campaign, for example, was one of the most complex of Mr. Setounski's career. Shot over two days and requiring multiple wardrobe changes, it posed both logistical and financial challenges. "They didn't seem at all perturbed by all the obstacles," he said. "They thrived on it. They were even instrumental in getting the cast we had involved, which isn't something you expect with production partners."

Also worth noting: Prettybird's standout work hails from across its entire talent bench. It's well-known in the industry that director-owned shops can easily become a platform, first and foremost, for that founding filmmaker. But Prettybird shines on the merits of all its directors and producers, not just for one or a handful of heavy hitters.

And there could be more to come from newly-added names such as Jason Zada, the creative-turned-director is another Creativity 50 alum and was behind such digital feats as the Emmy-winning "Take This Lollipop" and Tourism Victoria's celebrated "Remote Control Tourist" campaign.

Surprisingly, what the company has become today uncannily reflects what its founders hoped it would be when they opened Prettybird, with trepidation, eight years ago after Ms. Emhoff and Mr. Hunter left their former big production home HSI to launch a new model.

"I want to embrace all types of creativity from different directions and nurture it," Mr. Hunter told Creativity at the time. "That's also one of the reasons I came up with the name Prettybird, because it's not about me. The value in the company is about the creativity, not so much about [being a] gun for hire, doing one-off jobs, but actually creating a partnership where creativity's shared, whoever it is that we're working with."

Today, "I think there's a community spirit among all the directors that are here," said Ms. Emhoff. "Part of it is because Paul doesn't have an ego and is constantly pushing himself. People talk to each other; they help each other out; they'll say what's happening, how their film's getting fucked up in post. That community has been a really important part of our growth."

"I came up playing team sports, so I always look at things as we win as a team, we lose as a team," said Mr. Hunter. "Everyone has to be down with this game plan if we're going to win."

And in an industry known for its lack of diversity, Prettybird is an anomaly, given that a woman and an African-American man stand at its helm. The founders said their influence, however, isn't as simple as black and white.

"I never wanted to be looked at as a black-owned company, because I felt like that put the message out there that we could only do a certain type of regionalized work," said Mr. Hunter. "It goes beyond me being a black man or Kerstin being a white woman. I feel like the combination of the both of us represents a larger idea, which is about people coming together from different backgrounds. The reason why we're pushing so much to do and say different things is to show how we're thinkers. We have ideas. We're fighting the same fight."