Agency Brief: For all the weirdos at the Super Bowl party | Ad Age
Skip to main content

Agency Brief: For all the weirdos at the Super Bowl party

READ THIS NEXT
Agency Brief: Duncan Channon urges people to quit smoking by empathizing with the struggle 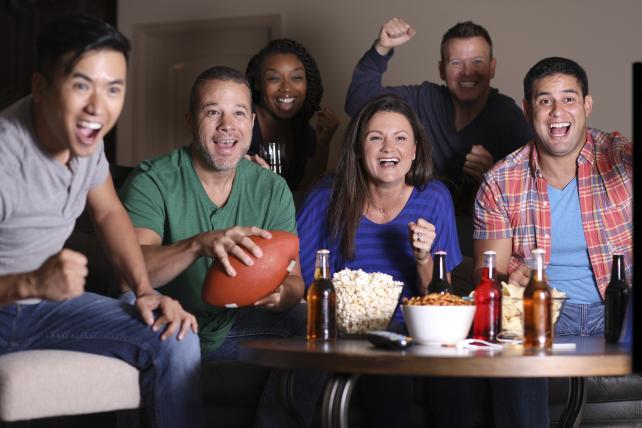 As the country goes elbow-deep into a bucket of KFC and freaks out over guys wearing shiny pants, some of you are more concerned with what happens around the football.

Aaron Walton, co-founder of Walton Isaacson, says there are a few differences between the way ad people and "mere mortals" watch ads during the Super Bowl.

For one, "Ad people don't have to have quiet – it's nice, but it's not a requirement," he told me via email. "We just stare at the screen and go into our happy place. We're used to noise. We're always looking at creative with a room full of people voicing their opinions. Quiet? Who needs quiet?"

Denizens of adland also have "Super Bowl Ad Memory superpowers," Walton opines, meaning they can recall years' worth of Super Bowl ad factoids from agency to ROI to strategies used. Maybe that's because they also turn analysis itself into a competitive sport.

"We train in advance," he says. "We come into the game prepared. We've watched pre-Bowl trailers, read articles, jumped onto industry chatrooms like Fishbowl to read comments from anonymous creative directors and strategists like: 'Maybe instead of paying expensive celebs, they should pay expensive copywriters?' and 'Brilliant strategy. Bad execution.'"

Some turn their analysis into a real-time thing.

Chapin Clark, executive creative director for social content at R/GA, says he's fallen into tweeting about the game and ads "without intending to."

"It starts innocently enough, but before you know it, you're live-tweeting the whole thing," he said via email. "It's seductive."

What isn't seductive? "It's tricky because everyone observes the same things, everyone has the same jokes. It's really hard to stand out."

Clark says the highlight of his Super Bowl tweeting career was two years ago. "I was working for a client and the CMO, in real-time, approved a BDSM-themed post making fun of a competitor's TV spot. That single tweet ended up grabbing a big share of voice despite the fact that our client didn't have any TV spots that year. I should have retired then. It will never get any better than that."

David Selby, CEO of Chicago-based Schafer Condon Carter, says he's "definitely from the 'keep-it-down-I'm-watching-the-ads school" — he likes to see them in context.

"I must say I'm a bit of sap who looks forward to this annual, over-the-top ritual and expensive celebration of our craft," he says. (And such celebration of craft, he says, must be done with Uncle Dougie's wings, "baked and finished on the grill.")

MediaCom's Chief Growth Officer Adam Potashnick calls the Super Bowl a "shared moment with family, friends and colleagues that we get to be excited about and enjoy together."

"And, I do love that even after all these years, my friends and family STILL haven't realized how I always win the bet of which advertiser is coming first in the ad breaks," he said via email. "If I could only master the odds on picking the color of the Gatorade bath, I could be the all around Potashnick champion every year."

Victoria Azarian, executive creative director at Ogilvy, tries not to watch the spots beforehand so she can see the reactions of her friends who aren't in the industry.

"But if anyone makes a peep while they're running I'll unleash 50 shades of crazy," she says. "I can become a 'Mom-ster.'"

Leeann Leahy, the CEO of The Via Agency (who says she is "as weird as any ad person" about the Super Bowl) agrees. She said historically she's been adamant about not watching ads before they run in-game.

"I have done just about everything to not spoil the surprise: Blocked my ears when others in the agency are talking about them, turned off 'The Today Show' when they do their previews and avoided the press and social media 'leaks' ... all in the hopes of experiencing the ads like a normal [non-ad] person ... on my couch during the game, chicken wing in hand!"

But not this year.

"This has become an increasingly difficult challenge indeed and this year I gave up on it and indulged in all the teasers and long form I could slurp up. We'll see how that enhances or ruins game day for me."

When it comes to game day, she likes to watch with a small group of people who are interested in the ads so people will actually quiet down for the spots. "But, on at least one or two years, I will admit to standing as close to the TV as possible to absorb every bit of the spots attentively and drown out the din of the party in the room," she says.

You guys are fun and all but you have to admit… you're a little weird at parties.

Enjoy, and see you next week!

Used car retailer CarMax, which spends nearly $100 million on measured media in the U.S., is reviewing its agency. Incumbent McKinney is participating in the review.

Singapore Airlines has tapped Omnicom shops TBWA and PHD for global creative and media, effective April 1. TBWA was the incumbent on the creative while Publicis Media's Zenith formerly held the media remit.

Athletic footwear brand Asics has picked BarrettSF to lead its creative and brand strategy. The San Francisco-based shop will handle creative for the brand's "Running Performance" category beginning with a new product launch in the spring. The brand had previously tapped Saatchi & Saatchi for creative in 2017.

WPP has agreed to sell its 49 percent stake in Richard Attias & Associates to its founder, Richard Attias — the Moroccan events producer and former chairman of PublicisLive.

In a statement Thursday, WPP said it sold the minority stake back to existing shareholders "in line with its stated objective of simplifying its offer and focusing on its core business." Indeed, Mark Read and the holding company he leads have not been shy in recent months about simplifying a holding company that has become "too unwieldy, with too much duplication."

Lagrant Communications has a new president: Keisha Brown. Kim Hunter, former president, will remain as chairman and CEO of the agency he founded.