From the Model T to the 'Peanuts' gang, a look back at Ford's WPP relationship | Ad Age
Skip to main content
Sign In Register

From the Model T to the 'Peanuts' gang, a look back at Ford's WPP relationship

At that time, Ford's agency was J. Walter Thompson and Henry Ford still was running the automaker. WPP and its predecessor produced such memorable taglines as "There's a Ford in your future," "Ford has a better idea," "Built Ford tough" and, of course, "Have you driven a Ford ... lately?"

In the automaker's early days, Henry Ford employed J. Walter Thompson to sell Model T's, but they parted ways after just two years. Three decades later, as Ford began planning for his company to resume full production after World War II, he was reassured that a big ad agency wouldn't cost more than a small one. He declared, "Well, we might as well have a big one."

So Ford terminated his agency, Maxon Inc., and the company signed its inaugural formal agreement with JWT in December 1943. The agency actually took over some of the automaker's advertising as early as 1942, said Ted Ryan, Ford Motor's archives and heritage brand manager. 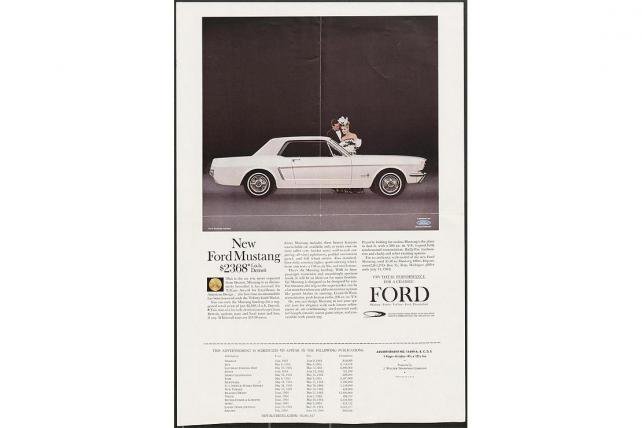 In a letter to JWT headquarters in New York, Ford Motor said: "The terms stated in your letter ... are satisfactory and are hereby accepted ... with the understanding that Ford ... may at any time terminate the arrangement by written or verbal notice to your company. We trust that the arrangement ... will prove to be mutually satisfactory."

The agreement was signed by Ford purchasing manager J. Walter Thompson, who just happened to have the same name as the agency—a crazy coincidence.

In the subsequent decades, JWT helped Ford launch many nameplates, including the Thunderbird, Mustang, Pinto, Taurus, Explorer, Ranger and Escort. 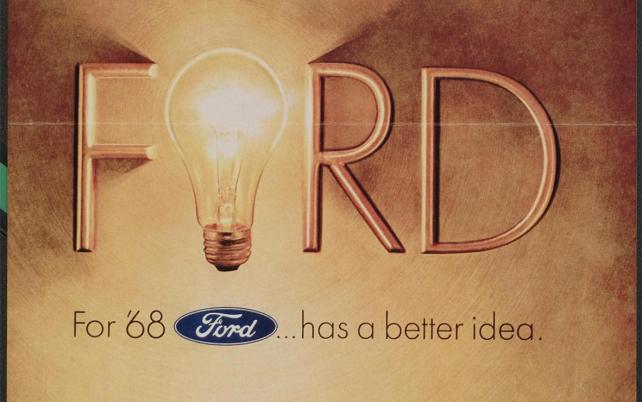 The first JWT campaign for Ford began in the winter of 1943-44. One ad showed a giant crystal ball with the caption, "There's a Ford in your future." Ad Age reported that the slogan was intended "to reflect, at least, partial peace and the lifting of restraints and restrictions in civilian life" and also was "attuned" to "a quickened eagerness to own new cars." A similar ad debuted in 1945, showing a long, winding road in the familiar crystal ball captioned, "You'll go high, wide and handsome ... There's a Ford in your future." Ryan said the campaign teased the new cars that would be produced as the automaker switched from wartime production as the "arsenal of democracy" back to passenger cars.

Ford's first TV ads aired in September 1946, according to the 1976 book "The Public Image of Henry Ford: An American Folk Hero and His Company." In the early 1960s, it ran commercials for the Ford Falcon featuring the "Peanuts" gang, representing the debut TV appearance of Charlie Brown and his friends, before their now-ubiquitous animated holiday specials later that decade.

With the help of JWT, Ford unveiled the Mustang at the New York World's Fair on April 17, 1964, with great fanfare and national advertising via newspaper, magazine and TV, Ryan said. The sports car was a sensation and popped up in multiple stories in Newsweek and Time and even the movie Goldfinger, in which James Bond is chased by a white Mustang convertible. The new Mustang received the Tiffany Award for Excellence in American Design in 1965, the first automobile ever to be honored by Tiffany & Co., and JWT touted this achievement in an ad featuring the gold certification and a white Mustang.

"Ford has a better idea" was another popular tagline that the automaker used in a variety of ads. A 1968 print ad featured a lightbulb in place of the "O" in Ford's name. The tag line also was used in a TV commercial for the 1968 Mustang.

"Have you driven a Ford ... lately?" was perhaps the most iconic slogan created by JWT. The campaign's musical tag line ran until 1994, nearly 11 years after its launch. In one ad for the 1993 Taurus SHO, a center shot of the vehicle is captioned, "Think of it as caviar for the power hungry. Have you driven a Ford lately?"

Ford's relationship with the agency wasn't always smooth, but the companies managed to iron out issues that arose. "One time Henry Ford II wanted management to fire us, but they wouldn't," Peter Schweitzer, JWT's then-CEO, told Automotive News in 2003. He said Ford's lieutenants told him, "Look, they're the best agency. Give us time and we'll fix it."

WPP entered the picture in 1987, when it bought JWT for $566 million. In 2006, it formed Team Detroit (now Global Team Blue) as a joint venture of five Ford agencies: JWT, Ogilvy & Mather, Y&R, Wunderman and Mindshare.

In 2011, Team Detroit's then-CEO, George Rogers, who created the Ford-focused agency, said its concept was "partly about efficiency," with a structure that allowed the agency to be "100 percent agnostic" about specific marketing communications services and media. The joint venture paid off, and the automaker was chosen by Ad Age as Marketer of the Year in 2010, when Ford posted its largest profit in more than a decade. In addition, Team Detroit made the 2011 Ad Age A-List of successful agencies.

"WPP is and has been a valued partner for decades, leading in our efforts to connect with our customers," Joy Falotico, Ford group vice president and chief marketing officer, told Automotive News this week in an email. "WPP has developed strong campaigns over the years because they understand Ford and our customers very well. One great example of this is 'Built Ford Tough,' which still characterizes the F-Series, America's best-selling trucks for 41 years."

Even as Ford brings BBDO aboard, it is not kicking WPP to the curb entirely. The automaker stated it will still use WPP for its U.S. Tier 2 dealer advertising, media planning, media buying, shopper and performance marketing, website development, customer relationship marketing and multicultural marketing. Ford also hired independent agency Wieden & Kennedy for creative and innovation projects.

Danielle Szatkowski is a reporter for Automotive News. Ad Age contributed to this report.

Danielle Szatkowski
View all articles by this author