Chili's picks OKRP as agency of record after project success

READ THIS NEXT
Agencies of the future may be unrecognizable—that’s a good thing
Chili's | Burger Best Competition
Credit: Chili's

Chili's Grill & Bar named O'Keefe Reinhard and Paul as its agency of record. The agency's work has helped spark improvements in the chain's sales and traffic.

Chili's began working with OKRP in 2017 on a project basis, including the "Chili's is back, baby" work that debuted in the fall.

"Rarely do things work out this well in this business," Chili's Chief Marketing and Innovation Officer Steve Provost tells Ad Age. "They make us feel like their only client, they're fast and they're just really creative."

Chili's is currently promoting a "3 for $10" deal with a starter, entree and soft drink as another way to entice diners as the overall casual-dining industry tries to rebound.

OKRP will now be its strategic partner on communication, brand strategy, category strategy and on how to maximize a message across various media, Provost says, adding that Chili's is ready to "speak with one voice and a much louder voice."

Provost joined Chili's in March 2017 after serving as president of Maggiano's, a smaller chain also owned by Chili's parent company Brinker International. In September, Chili's cut 40 percent of the items on its menu and added more meat to its burgers, ribs and fajitas. Ads from OKRP began airing in early October.

Chili's continues to work with 360i as its media agency, Fact & Fiction as its social agency and Ansira on email and digital marketing, Provost says.

For now, the brand is sticking with its "Chili's is back" message while pondering how long it can stick with a comeback theme.

Chili's saw comparable sales and traffic decline in its latest quarter, but the declines have gotten less severe. Its traffic was down about 8 percent when it started working with Chicago-based OKRP, says Provost, and fell roughly 2 percent in the latest quarter, with significant improvements month to month.

"We're seeing increased frequency both among heavy users and light users as they come back more often to see what's new at Chili's," Brinker International President and CEO Wyman Roberts said on a quarterly call Tuesday. He also said that many of the ads running in the third quarter focused on lunch and Chili's saw "several percentage points of improvement in lunch traffic." 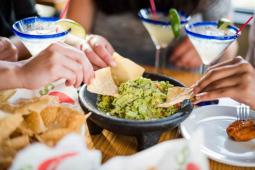 Results have improved since the slimmed-down menu and campaign were introduced in the fall. Chili's U.S. same-store sales declined 1.6 percent in the second quarter ended Dec. 27, versus a 3.2 percent drop a year earlier. Chili's U.S. same-store sales fell 1.1 percent in the fiscal third quarter ended March 28, an improvement from a 1.7 percent decline in the same quarter a year earlier.