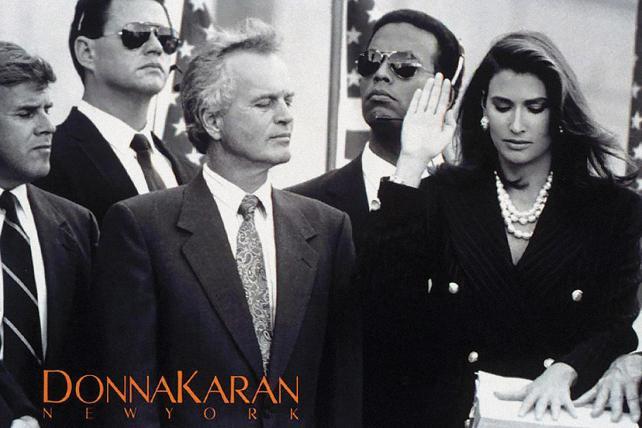 Shortly after The New York Times story broke exposing Harvey Weinstein's brutal history as a sexual predator, fashion designer Donna Karan was asked about him. Famous since the '80s for her pioneering line of easy, elegant work wear for women, Karan rambled off the rails of sisterhood into slut-shaming: "How do we present ourselves as women?" she asked. "Are we asking for it by presenting all the sensuality and all the sexuality?"

Within a few days, Karan recanted, telling WWD she'd been exhausted, adding, "I have been dressing women for 40 years and I show their sensuality. I have done it in my advertising campaigns."

She has. But as it happens, in 1992 she was more into power moves. That year was dubbed "The Year of the Woman" after the excruciating Anita Hill hearings fired up female candidates to run for Congress (their numbers doubled). That same year, Karan unleashed "In Women We Trust," a provocative, cinematic print campaign showing power-dressed model Rosemary McGrotha entrenched in the trappings of the American presidency.

Twenty years or so before "Veep" and "Madam Secretary" it modeled a portrait of a seasoned (and perfectly dressed) pro being sworn in, riding in an open car surrounded by Secret Service men and working in the Oval Office. Created by Peter Arnell, photographed by Peter Lindbergh, the wordless visuals spoke a credible language of "sky's-the-limit" female empowerment.

Fast forward to 2001. Karan sold her label to LVMH and stepped away entirely in 2015. In 2016, the French company shut down the main Karan brand and unloaded DKNY to G-III Apparel Group—which holds the license for Ivanka Trump clothing.

So irony is alive and well, unlike the Karan brand and the progress it so boldly predicted 25 years ago. Still, the cycle continues, and hope persists.