How Japan's Dentsu Climbed to the Top of the Agency World

Dentsu Does Things Differently, From Scaling Mountains to Sending a Robot Into Outer Space
READ THIS NEXT
Q&A: Rob Reilly explains why he is moving to WPP 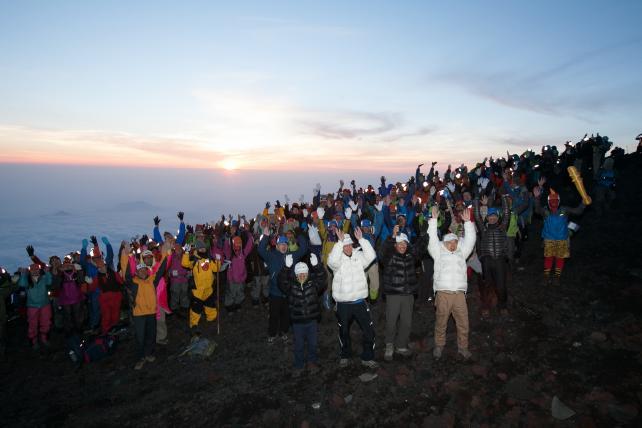 The ritual started in 1925. Every July, Dentsu's young hires and newly promoted executives climb Mt. Fuji, elevation 12,388 feet. From afternoon into the night, they navigate volcanic rock and ash to reach the summit for sunrise around 4:30 a.m.

"You're kind of jam-packed, and there were four executives kind of spooning each other on two tatami mats -- it was close quarters," Mr. Andree said.

Once there, exhausted climbers write postcards to clients and send them from the summit's post office. Another tradition is prayer: "I prayed in front of the Shinto shrine for the success of my clients and Dentsu," Mr. Andree recalled.

It's clear the Japanese agency has taken a very different path to get to its current position: Dentsu Inc. is No. 5 in Advertising Age's ranking of the largest agency companies. Yet western ad giants don't ask employees to literally climb mountains and pray for clients' prosperity.

Dentsu struggled for decades to go global, but after acquiring Aegis Group for nearly $5 billion in 2013 under Mr. Andree's guidance, it finally succeeded. Dentsu Inc.'s revenues inside and outside Japan are now about equal, a milestone for the 114-year-old company.

But while Dentsu Inc. has a global presence and brands from Carat to McGarryBowen to Isobar under its umbrella, its core business is still Japan, with the traditions and quirks that go with that. The Mt. Fuji climb, which includes more foreign employees now, is not just some Silicon Valley-like team-building exercise, said Christopher Demetrakos, who worked for Dentsu in Japan for 13 years. It's a symbol of ambition.

"The message is, 'We are going to conquer the one symbol that represents Japan more than anything else," said Mr. Demetrakos, founder of independent digital-marketing agency Manzanita. "And, 'once we do that, it will signify that we can do anything.'"

A Tower With 70 Elevators

No other agency anywhere has such influence in its home market. Dentsu says it controlled 25% of 2014 ad spending in Japan, the world's third-largest ad market; that's about 80% bigger than Hakuhodo, at No. 2. If Mt. Fuji is one emblem of Dentsu, another is its Tokyo headquarters, designed by Jean Nouvel. It's huge. Dentsu occupies 45 of its 48 floors. About 6,200 employees work there, including 900 creatives. The building has 70 elevators.

"We have so many elevators, largely to keep teams that are working on competitive accounts apart," said Mr. Andree, who is also executive chairman of Dentsu Aegis Network, the name for the company's ad businesses outside Japan.

Client conflict isn't considered a big issue in Japan, and Dentsu has many competing accounts. The company declines to name clients, but last year it submitted awards work for Toyota and Honda. Other longstanding clients are Sony, Shiseido and Suntory.

It's involved in animation and movies, like "Departures," named best foreign-language film at the 2009 Academy Awards. And it's in sports, buying broadcast rights and acting as exclusive marketing agent for the Tokyo 2020 Olympics.

In a country where relationships count, Dentsu has got them in spades: Akie Abe, the wife of Prime Minister Shinzo Abe, once worked at the agency.

At times, Dentsu's omnipresence is almost comical. This year the Japan Advertising Agencies Association honored Dentsu Creative Director Kaoru Sugano, who worked on the Honda campaign that used sounds, lights and data to recreate a record-setting lap by late F1 legend Ayrton Senna. (The campaign also won a Titanium Grand Prix at the Cannes Lions International Festival of Creativity.) Here's what's unusual about the Japanese prize: The leaders of the industry group awarding it were two former Dentsu presidents. And Dentsu has won 24 out of 26 years.

Adding Women to the Fold

The business environment in Japan is just different; for a Japanese-led, global company, that brings strengths and weaknesses too.

The country struggles to keep women in the workforce, and the prime minister launched a policy of "womenomics" to combat that. Just 30% of Dentsu's Japan employees are women, although that's up from 10% back in 1986. Of the agency company's 29 executive officers and 12 board members, none are women. Compare that to WPP, with four women board members out of 17, or to Publicis Groupe's supervisory board, with seven women out of 13.

Dentsu spokesman Shusaku Kannan pointed out that in Japan, promotions to top management traditionally happen late in an executive's career, so women hired at Dentsu over the last 30 years are still climbing that ladder.

On the upside, advertising -- especially at Dentsu -- is a sought-after career choice in Japan. About 10,000 graduates applied to Dentsu since last April, and just 132 were hired. Dentsu was Japanese graduates' second-most coveted employer in 2015 after All Nippon Airways, according to Nikkei Shimbun newspaper.

Dentsu is a national institution -- and in an industry that's all about trends, that can impact creativity. Dentsu has fostered a system where the go-to TV advertising formula is using a celebrity and making a big media buy -- two things the agency has great access to, said James Hollow, president of Lowe Profero Japan.

"The worst thing that could happen to Dentsu is to turn a small brand that didn't give them much money into a hit overnight; then big clients who give more money would go, 'Hang on, we want one of those,'" said Mr. Hollow.

Outside the bread-and-butter TV ads, the company has some futuristic, talked-about projects. It was involved in "neurowear," with wearable cat ears that sense brain waves and communicate your mood by perking up or drooping. And in November, the company launched a center for robotics.

Going forward, "I think Dentsu has never been in a stronger position," said Chris Beaumont, managing partner of Results International for North Asia. The Aegis acquisition was expensive but well worth it, and Japanese clients appreciate the global reach and digital capabilities, he said.

"There's a sense of innovation, a sense of disruption that is more client-solution-related, rather than just advertising," Mr. Beaumont added.

One of Dentsu's recent projects aimed high, way higher than Mt. Fuji. With longtime client Toyota and other partners, it sent a cute robot named Kirobo to the International Space Station. The goal was to look at how robots and people might interact in the future. It also got people talking about Dentsu.

Ayako Mie contributed to this report.