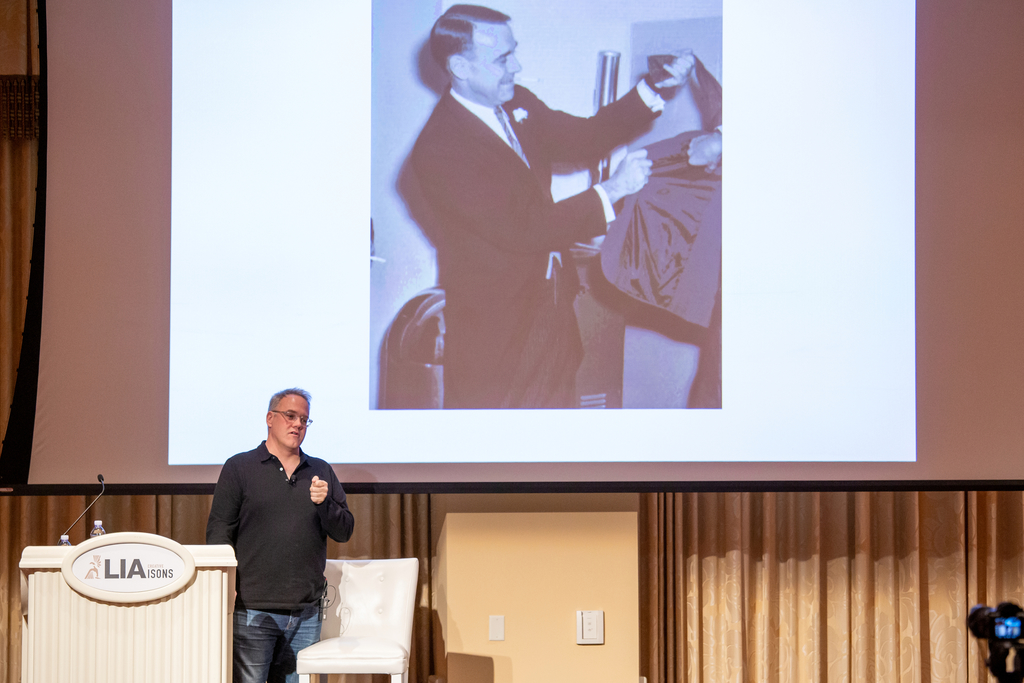 Former Droga5 Chief Creative Officer Ted Royer’s appearance at an advertising event in Las Vegas this past weekend sparked heated, passionate reactions around the industry—from those in attendance and elsewhere.

Royer took the stage on Sunday morning and addressed the allegations of anonymous Instagram account Diet Madison Avenue that preceded his firing from Droga5 more than a year-and-a-half ago. While some praised Royer for being brave enough to speak, there was also plenty of shock and disbelief about his presence at the event from creatives both young and seasoned. Agency network FCB and advocacy group Time’s Up Advertising were moved to take action against the London International Awards, the organization that backed his presentation.

The Liaisons
The London International Award's Creative Liaisons program ran over several days alongside its awards judging period, still continuing this week. Liaisons aims to provide promising talents with the skills to ensure their success. “Liaisons is designed to be a creative oasis in an industry that is in danger of focusing less and less on its creative output. We stand for the work and those who make it,” reads the description on its site.

During this year’s event, however, some attendees found Royer’s presentation the opposite of a “creative oasis.”

One attendee was so affected by his presence that she left the room crying, prompting festival president and fouder Barbara Levy to take the podium and apologize, even recounting her own experience of sexual assault in 1983.

Some Liaisons attendees told Ad Age they felt Royer’s presentation was geared not toward their enrichment. “It was a redemption speech, in my opinion,” says one female creative. In interviews, others called it “tone-deaf” and “inappropriate.” “Everything about it felt very wrong for me,” another attendee tells Ad Age, “even if what he was trying to do was be a better person. He did it in a horrible way, in a really weird context. He’s telling us that all these victims are liars, but some of us in the room were sexual assault victims.”

Royer was asked during the Q&A session why he was presenting at that place and time. “It’s the first thing I’ve been invited to,” he said. “I wanted to talk to creatives because the things that I have learned and have embraced, and tried to embody over the last year-and-a-half I think are very relevant to young creatives. I wanted to level-set and I really wanted to give back to this industry.”

Lacking empathy
One of the points Royer made repeatedly during his presentation was his desire to meet face-to-face with people, including those he has hurt, as a means of opening up communication and promoting “understanding and empathy.”

But some attendees say that his presentation itself lacked empathy. “My issue with what he was saying was the implication that it was my responsibility to resolve the problem,” says copywriter Sydnie Felton of VMLY&R in Kansas City, Missouri. “I would have loved to hear his perspective, even if he gave advice for if you find yourself in a difficult situation, and how you can come out of it in the best possible way and not feel your career is threatened. Everything was about protecting men in his position rather than empowering us with the proper tools.”

“A lot of us were visibly shaken, but so were the guys,” says another female creative. “A lot of them afterwards were apologizing to the women in the room.”

“As soon as he started talking, I thought it was a bit surreal because almost immediately he positioned himself as a victim—these are the things that happened to me,” one male attendee tells Ad Age. “He very clearly did not seem to understand these things happened because of his actions and decisions.”

But “I don’t want to dogpile,” he adds. “I saw a broken dude who lost everything, and I want him to find peace and turn this fucked-up thing into something good. I think he just messed up. He squandered a good opportunity and put the burden on the victims. He really needed to take accountability.”

LIA misstep
For some in the audience, the bigger issue wasn’t Royer’s speech, but the fact that it was unannounced—or at least poorly announced—especially in light of the fact that some in the audience had endured harassment or assault themselves. Royer’s name and picture had not been on the program’s online schedule until the week of the event, and in the printed program, his slot listed only “Guest Speaker.” When the show presenter brought Royer to the stage he gave an awkward, quick intro: “I have no idea what this session is going to be about, but I do know that his work speaks for itself.”

Creatives were also upset by how LIA addressed the adverse reactions to the talk. After the attendee who was in tears left the room, Levy said, “We just had a little incident and I want to apologize to anyone who felt uncomfortable. It didn’t occur to me that the topic he was talking about might make some of you feel uncomfortable.” Levy then went on to reveal her rape in 1983.

“When Barbara tried to use her own sexual assault story to justify their reasoning for bringing him there, it left a bad taste in everyone’s mouth,” says one creative.

Another creative, however, tells Ad Age, "I was very impressed that Barbara instantly got up on stage and apologized. For me personally I was happy to move on from there."

Some Liaisons also say that Royer’s presence didn’t prevent them from reaping the benefits of the other parts of the program. CHE Proximity Melbourne copywriter Lauren Eddy and art director Aicha Wijland, in industry publication Campaign Brief, wrote that while they felt “robbed” by Royer’s talk, they still learned valuable lessons in empathy and unconscious bias from other workshops and speakers, including award-winning journalist Lara Logan.

Another creative affected by the speech still called the program as a whole an “unbelievable experience” that left him eager to go back to his agency and start applying what he learned.

“We can see that our misstep was not taking greater initiative to inform the attendees of the schedule change once the conference started,” said Levy in a statement to Ad Age.

As for how she handled her apology to the audience after Royer’s talk, she explained that the intense reaction of one particular participant moved her to speak to the crowd. "I went to have a conversation with her and then felt the need to address the audience," she said. “In the wake of all the emotion in the room, I may have taken a miscue and been too open about my own personal experience.”

The leaders in the room
While Royer’s presentation was meant for young creatives, a number of industry leaders who were judging the LIA Awards took a break to hear him speak.

During the Q&A session, Edelman Chief Creative Officer Judy John took the opportunity to shed light on questions presented to Royer regarding the “burden” of having to speak to or report an accuser.  “As a young creative I’ve been in compromising positions as I think some other women in the room have,” she said  in that session. “It’s hard to go to your boss or superior and say, that wasn’t cool… because you might lose your job, you might get blackballed, you might be a troublemaker. There are a lot of reasons why women don’t come forward.”

Another female industry leader echoed the sentiment of the young creatives. “Bringing up DMA and all those accusations were not necessary for someone who was accepting responsibility and apologizing to anyone he hurt,” she tells Ad Age. “But there has to be a path forward for anyone who wants to move forward in my opinion.”

She was also struck by the generational differences in the reactions to his talk. “For the most part my generation is a bit numb from growing up with all of the bad stuff,” she says. “We are happy to be talking about it and see a new awareness, but we are mostly focused on the wage gap and opportunities for women at the highest levels. Comments about how we dress have little effect, and attempts for romance or otherwise are annoying but not shocking.”

The younger generation represented by the LIA participants, however, seems to have very different reactions, she says. “There is a lot of anger and they don’t feel like they can talk. They feel way better hiding behind social media because they are used to it. They feel like we are enablers, and by being complacent we didn’t clean it up for them. That comment about their outfit is like a slap in the face.”

Veteran producer Oliver Fuselier thought Royer’s move “was a lesson in humility and true bravery,” he tells Ad Age. He “put it all out on the stage, from apologizing to the room of young creatives and beyond as well as putting his email address on the screen with a standing offer to meet with anyone that he hurt, angered or made feel bad... We as a society need to help us all to find a way to move forward and allow men to start righting their wrongs and healing themselves. We must still hold them accountable, but at the same time support them in their own road to recovery.”

Another industry leader in the room for the speech added that despite what happened, the LIA's program is still important for the industry. "I believe in the power of learning and the LIA Creative Liaisons team has so far funded almost 1,000 young creatives from around the world to attend the program," he says. "I urge young creatives who have attended Creative Liaisons over the years to also share their positive experiences so others who haven’t attended it will continue to attend and benefit from it. The learning must never stop."

Ad Age reached out to Royer about the reactions to his speech, but he declined comment.

The Industry
The industry has begun to take action in response to the speech. FCB, which had both creatives in the Liaisons program and as judges in the LIA, announced it would be terminating its relationship with the awards show. “A recent presentation given at the LIA was deeply upsetting to some of our team in attendance, and the reaction and response by the LIA has been very disappointing and unsatisfactory,” the agency said in a statement.

In a letter to Levy and the other organizers of the LIA, Time’s Up Advertising also took issue with how Royer’s speech was not properly publicized to the attendees. “You left no option for consent,” the letter read. “You showed disrespect for LIA attendees who have been harmed by Royer’s behavior, specifically, or faced similarly disturbing behavior in the workplace. You signaled that his voice is worth a platform, while our voices aren’t worth believing.”

The organization then went on to list the actions LIA should take in the wake of this incident: apologize, publicly commit to creating a safer and more inclusive environment “that respects women,” and be transparent.

If LIA does not heed this advice, Time's Up Advertising Executive Director Christena Pyle said in an additional statement to Ad Age that the organization is “prepared to take further action.”

Levy told Ad Age in her statement that the LIA has been communicating with FCB on the agency’s decision to sever ties with the organization.

“We apologize if we inadvertently upset anyone during at the LIAisons program,” she said. “We will work closer with the agencies and the top-level creatives to better curate the program moving forward.”