A Look Back at Modernista's Most Talked-About Work

Creativity Reflects on a Decade's Worth of Ads for Clients Like Gap, GM, Palm and Showtime

As Modernista co-founder Gary Koepke told Ad Age today, he and partner Lance Jensen made a lot of good albums together. The agency's work reflected the creative sensibilities of the shop's founders, particularly Mr. Jensen's storied flair for music and popular culture.

While at Arnold, Mr. Jensen created some of the industry's best known and loved spots for Volkswagen, spots such as "Milky Way" and "Da Da Da" that were driven by music and mood. And while many other agencies leaned heavily on comedy dialogue advertising, Modernista's work tended to the visual and the visceral. Here, a selection of some of the agency's notable work from its founding in 2000 to last year.

Advertising Age Embedded Player
Gap: Snowflakes
Modernista created the Gap's holiday campaign shortly after getting the account in 2000. "Kiss" and "Snowflake" were a departure from the "Everybody in" campaign that Gap had done previously in-house. The spots were directed by Dayton/Faris, who worked with Mr. Jensen on the famous Volkswagen "Milky Way" spot while he was at Arnold.
Advertising Age Embedded Player
Gap: Will Ferrell Forever in Blue Jeans
Modernista created notable Gap campaigns that featured celebrities from across the entertainment landscape, from Juliette Lewis to Daft Punk. Here, the agency showcases the musical talents and foretells the superstardom of a certain "Saturday Night Live" regular.
Advertising Age Embedded Player
Gap: Give a Little Bit
Shaggy and friends perform a Supertramp classic in this holiday campaign from 2001.

Of course the product was sort of a ticking social and environmental time bomb, but over the course of its relationship with Hummer, Modernista crafted some of the most memorable campaigns in auto advertising. The shop worked with a who's who of visual directors, such as Rupert Sanders, Fredrik Bond, the Snorri Brothers and Daniel Askill, as well as storytellers such as Scott Hicks and Noam Murro, to create a wide range of influential and award-winning work. Some of the highlights are here. 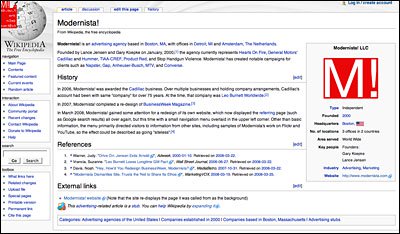 Modernista: Modernista.com redesign
Perhaps one of the agency's most talked-about creations in recent years was its own site redesign. The shop earned kudos and criticism when it turned its own site -- which now consisted of a tiny HTML menu -- into a transparent window on the web.
Advertising Age Embedded Player
Cadillac: Reignition
Modernista's three-year relationship with Cadillac didn't seem like much of a high-water mark. The work, like this good-looking but predictable anthem spot, showed it.
Advertising Age Embedded Player
Palm Pre: Juggler
We're not really sure about the names of any of these spots because the campaign is known everywhere simply as the "Creepy lady campaign."
Advertising Age Embedded Player
Project Red: Integrated holiday takeover campaign
An integrated effort launched on World AIDS Day, this campaign featured pop up retail shops in New York, San Francisco, Tokyo and London that sold a range of (Red) products. The campaign also included a takeover of London's Oxford Circus underground station and digital and social media elements.
Advertising Age Embedded Player
Showtime: Dexter ARG
One of several campaigns for Showtime, Modernista crafted an elaborate nine-week alternate reality game for the fifth season of Dexter.