Three Agencies Have Given Back Five Lions This Year, a Cannes Record
READ THIS NEXT
AthenaHealth launches first campaign from Colossus

Ogilvy & Mather returned two prizes this week that its agency in Vietnam won at the Cannes Lions International Festival of Creativity last month. In an industry rife with scam ads, it's not uncommon for a trophy or two to be surrendered by an agency during or shortly after the festival, but this is a record year, with five undeserved Lions handed back -- so far -- by Ogilvy, Grey and BBDO Worldwide. 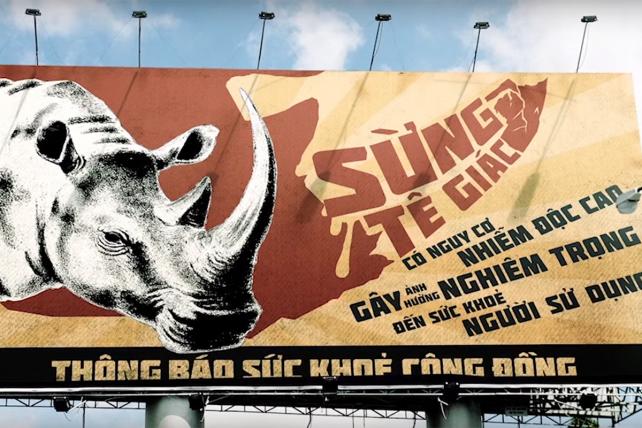 The Ogilvy Vietnam effort won a silver Direct Lion and a bronze PR Lion for the Rhino Rescue Project for "Saving Africa's Last Wild Rhinos, By Poisoning Them." The idea was to kill demand in Vietnam for rhino horns by injecting them with a substance that would be harmful to humans but not to the animals, and then publicizing the danger to consumers.

Australia-based ad blog Mumbrella followed up on rumors that the agency was about to surrender its Lions and quoted this statement from Ogilvy:

"The Silver and Bronze Lions the agency won for the Rhino Rescue Project will be given back to the Festival based on knowledge that the Ogilvy & Mather Asia Pacific management team acquired after the Festival. We determined that some elements of the campaign material created to support the NGO's efforts to reduce Vietnamese consumer demand for rhino horns did not run in-market as stated in our submission video."

The statement didn't give any further details, and a Cannes festival spokesperson said in an email "We have nothing further to add to the statement issued by Ogilvy this week."

Reached by Ad Age via Facebook, Lorinda Hern, co-founder of the Rhino Rescue Project, responded "We only heard about it recently, and honestly, we are more disappointed about the impact the agency's negligence (at best) and/or sheer recklessness (at worst) could have on global rhino conservation efforts than about the awards being returned. Had we been aware of the creative liberties Ogilvy took in its submission before it was entered at Cannes, we would most definitely have requested that its content either be edited to contain only footage of actual campaign elements (like the PR event we hosted for a sizable group of Vietnamese journalists, which was enormously successful) and accurate statistics, or that it be withdrawn altogether."

For Ogilvy, the two Lions were among a total of 120 prizes won by 31 offices around the world, making Ogilvy the Network of the Year for the fifth straight year at Cannes, Ogilvy boasted in a press release issued after the June festival. Ogilvy execs in the U.S. and Asia did not immediately respond to requests for comment.

The Cannes festival also confirmed that more Lions were returned this year than in previous years. It started during the festival, when Sao Paulo shop Almap BBDO won a bronze Outdoor Lion for Bayer aspirin ads so creepily suggestive, with implications of sexual violence and invasion of privacy against women, that they first drew attention for being sexist. That critical spotlight led to Bayer outing the agency as having paid to briefly run the work for the aspirin brand in an effort to make it festival-eligible.

David Lubars, BBDO's chairman and chief creative officer, said while on stage at a Cannes session that he had learned a BBDO shop had "a pretty scammy ad" that had won a Lion and "I told them to return it." The agency withdrew all Almap BBDO's Bayer entries from the festival, which included other Bayer work that had won a bronze Lion in the Print & Publishing category. That still left Almap BBDO with enough Lions to be named the festival's Agency of the Year.

Two weeks after the festival, Grey succumbed to relentless pressure from bloggers who said the refugee-locating app I Sea didn't work, and returned the bronze Promo & Activation Lion won by Grey in Singapore (even before the prize was awarded, Apple had pulled the I Sea app from iTunes). In a bitterly-worded statement, Grey defended the app, but said the agency had had enough of the controversy and wanted to be done with it. Besides, he said, Grey won more than 90 other Lions at Cannes this year.

Are clients concerned about the questionable entries submitted on their behalf by some of the biggest agency networks in the world? Ogilvy client Ms. Hern from the Rhino Rescue Project said, "We can only hope that the agency -- and perhaps the industry as a whole -- would have learnt a valuable lesson from this debacle: clients' stories deserve to be told in a way that is truthful and fully representative of what they stand for. We most certainly did not expect our story to be bolstered with inaccuracies. The reality of rhino poaching is devastating enough as it is."