READ THIS NEXT
Agencies of the future may be unrecognizable—that’s a good thing
Papa John's Logo
Credit: Papa John's/Business Wire

Olson Engage, which signed on as Papa John's public relations agency of record in February, said Thursday that it has resigned the troubled account. But its media agency, IPG Mediabrands' Initiative, says it will continue to work with the pizza chain.

On Wednesday, news of founder John Schnatter's use of the "n"-word in a May conference call, first reported by Forbes, resulted in his resignation as chairman of the board, though he remains a member.

The PR agency says it was not on the call with Papa John's and the chain's then-agency, Laundry Service, during which Schnatter used the racial slur.

"We were hired to help their brand, franchisees and employees recover from recent controversies and connect with consumers in new and exciting ways," Olson Engage said in a statement. "On the consumer front, we did precisely that through several programs that delivered very positive results. But we had significant recurring differences with their founder regarding the best way to address the controversies and restore and advance the brand's corporate reputation for the good of their workforce and franchisees."

In a statement, Initiative U.S. CEO Amy Armstrong said her agency will continue to work with Papa John's.

"I had a serious, forthright discussion with Steve Ritchie, the company's CEO, about this highly disturbing incident," she said in the statement. "He assured me that he and his company take this kind of conduct as seriously as we do—and his assurances have been matched with a serious commitment to diversity and inclusion efforts and John [Schnatter]'s swift resignation as Chairman of the Board. Our agency met to discuss the situation, and decided that, as a result of the client's appropriate, pro-active response, we will continue to serve as their media agency."

The May call was meant to help Schnatter, the face of the chain he started, with media training. In large part this was due to the chain's November quarterly earnings conference call, in which Schnatter had suggested that sales were dragged down because of how the NFL handled the players who kneeled in protest during the national anthem. (At the time, Papa John's was the official pizza of the NFL, a relationship that dissolved in February.)

"To be clear, none of our people attended the meeting reported in Wednesday's Forbes article, and no one at Papa John's ever used racially-charged language in front of any of our team members," the PR agency's statement said. "If they had, we would have addressed the issue immediately and directly. Our day-to-day clients were dedicated professionals and we wish them success moving forward."

When Olson Engage was hired, the agency applauded the company's new leadership, which at the time included CMO Brandon Rhoten (who then left in May).

During its short tenure, Olson Engage's outreach included promoting Laundry Service's first campaign for the chain in April. The first spots in that campaign noticeably excluded Schnatter, who then appeared in later ads promoting a $12.99 meal deal. 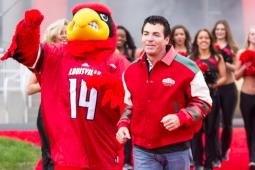 Along with giving up the chairman role at the company he founded, Schnatter on Wednesday resigned from the University of Louisville's board of trustees. Schnatter has deep financial ties to the university, where the football team since 1998 has played at Papa John's Cardinal Stadium, following donations from Schnatter himself and Papa John's.

"It would be premature to discuss the removal of Mr. Schnatter's name at this time," the University of Louisville said Thursday. "The naming rights are being evaluated."

Even before this incident, Papa John's was struggling. North American comparable sales fell 3.9 percent in the fourth quarter, the chain's first such quarterly decline since the third quarter of 2010. The weakness persisted in the first quarter of 2018, when such sales fell 5.3 percent.