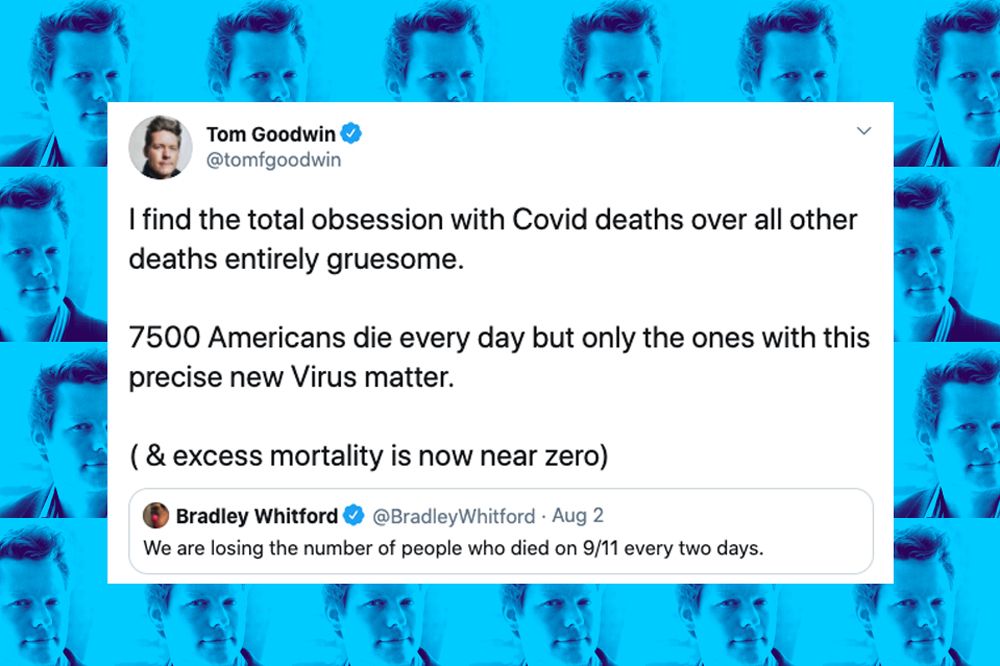 Tom Goodwin, the head of futures and insight for Publicis Groupe, ignited a heated Twitter debate on Sunday involving some well-known industry executives after he criticized "the total obsession with Covid deaths over all other deaths" as "entirely gruesome."

Goodwin wrote in the tweet, "I find the total obsession with Covid deaths over all other deaths entirely gruesome. 7500 Americans die every day but only the ones with this precise new Virus matter. (& excess mortality is now near zero)."

He continued in a thread, "Still finding it totally baffling that someone who dies from Covid is more preventable & thus more tragic than someone who dies of delayed cancer diagnosis or delayed surgery because of the lockdown, which is just how life is. & 2019 Influenza B deaths are less tragic why?"

I find the total obsession with Covid deaths over all other deaths entirely gruesome.

7500 Americans die every day but only the ones with this precise new Virus matter.

A Publicis Groupe spokesperson said only, "His views are not reflective of the company’s."

His tweets sparked a Twitter firestorm, though. R/GA U.S. Chief Strategy Officer Tom Morton was quick to respond to Goodwin, stating in a tweet: "Because it's a new disease with no vaccine and no cure and 150,000 Americans are dead. Please no more clickbait contrarianism. You're better than this."

According to the latest figures from the Center for Disease Control and Prevention, there have been 154,471 deaths in the U.S. related to coronavirus.

Goodwin then went off on Morton, who subsequently retweeted the Publicis exec's response with the statement: "I guess this is the end of me and Tom Goodwin's professional correspondence." Several industry executives then jumped into the debate and to Morton's defense, including Wieden + Kennedy Chief Creative Officer and Co-President Colleen DeCourcy, The 3% Movement Founder Kat Gordon and Stink Studios CEO-Partner Mark Pytlik.

Morton did not respond to a request for comment. Goodwin, though, told Ad Age that Morton blocked him on Twitter following the argument and that he would "welcome the chance to talk to him about any aspects of what he’s put, either in public or private."

I guess this is the end of me and Tom Goodwin's professional correspondence. pic.twitter.com/oVGaV3KuGe

Goodwin had responded to Morton with a series of tweets including: "Apologies for caring about the thousands dying from suicide, delayed cancer treatment, delayed 'elective' surgery etc, its not fucking contrarianism, is basic morality. Get off your lofty perch & give a shit about the vulnerable- Your sourdough baking homeschooling works well for YOU."

"Seriously Tom, your double income, working from home, moral high ground judgment makes me fucking sick," Goodwin continued in his Twitter thread response which was retweeted by Morton. "Do you think I'm trying to jerk off to the S&P500 or do you think maybe I have a little more empathy &can see life in tatters in all directions, well beyond the Hudson valley."

Goodwin concluded in his tweets against Morton, "By all means think I'm wrong, argue with the data, but never ever doubt my intentions and NEVER think this is simple."

"I’m a big believer in conversations about vital topics and to learn from the debate," Goodwin told Ad Age. "Changing your own opinions from conversation is better than maintaining it, it means you’ve learned something."

"Rest assured I mean nothing personal. I, like many of us, am just painfully aware a lot of people are really really suffering right now," Goodwin continued in an email. "We use lines like 'we’re all in this together', and I’m not totally sure we’re doing our gifts of empathy justice. The homeless around Penn Station grow ever more gaunt, drug addiction hotlines get overwhelmed, the elderly are feeling more isolated by the day, kids below the digital divides see their chance of changing generational wealth gaps evaporate. The value we bring to our clients comes from understanding the world and most from REALLY understanding people. It’s our job to see why people would vote for Trump when it seems illogical, to see why people don’t want to wear masks, to drink with Border agents, to do trends decks from Dollar General and from Hudson Yards."

DeCourcy, one of the execs who came to Morton's defense, argued though that the way in which Goodwin responded to Morton was "not leadership."

"Everyone is entitled to their opinion and debate can be a productive tool," she told Ad Age. "Tom Goodwin's ego takes those things to ugly places."

DeCourcy noted that she does not personally know Goodwin but called Morton "a kind and thoughtful member of the advertising community."

Goodwin has never seemed to shy away from voicing his opinion publicly and often his tweets can be seen as incendiary. On July 30, for example, he commented on companies' ineffective ability to "sell" via Zoom: "I don’t really care why you started the company, who you are, who backed you, just show me the thing. It’s not rocket science."

Pytlik, in defense of Morton, had wrote in a tweet: "Ah yes, all that grandstanding and extreme whataboutery was merely the sign of *checks notes* a more empathetic man."

DeCourcy wrote, "There are not enough days in life to care about Tom Goodwin." Gordon wrote, of Goodwin, that she "dropped him recently when he parentsplained me and he has no kids," to which DeCourcy responded: "He's a 'splainer."

Seemingly in response to the debate he sparked, Goodwin tweeted out a series of posts on Monday stating, for example, "Not sure what the point of a voice is if you are not going to use it for what you believe to be right," and affirming his views are his own and "not representative of a Publicis POV." Goodwin was named head of futures and insight for Publicis Groupe in January after having served four years as executive VP and head of innovation for the holding company-owned Zenith Media.

Time to repeat that I'm not a voice of Publicis

This thread is just me, not representative of a Publicis POV

So can't see any of the Tweet, or what emerged, or reply-I'm sure I'd be apologizing

Not a victim,just being pragmatic