What you missed at Barton F. Graf's 'funeral'

The casket lay open to its inhabitant: a small stuffed mouse. A black wreath hung behind the podium. A sea of black-clad mourners watched on as two frat-boy-looking creatives, one in a colorful striped sweater and the other in a plaid flannel and jeans, stepped up to deliver the eulogy.

The one in plaid, Joey Ianno, looked at the other in stripes, Matty Smith, then glanced at himself up and down before announcing to the room, “I feel pretty overdressed." He then shed his jeans to reveal much tighter knee-high denim shorts that he revealed are actually his wife’s, who watched on in what appeared to be amusement from the second row. After stripping, Ianno admitted something still didn’t feel quite right, and the two picked up a beer and chugged.

The sea of mourners clapped and howled.

No, this is not the opening scene of a new comedy starring Vince Vaughn and Owen Wilson. It’s the final outlandish stunt by Barton F. Graf 9000 the independent creative shop behind some of advertising’s wackiest work that announced its closing in August. On Thursday evening, the agency founded in 2010 by Gerry Graf threw itself a funeral—a fitting bon voyage. It wasn't his first; in 2014, Graf threw a funeral for the industry at Advertising Week.

And, because one can expect nothing less from Gerry Graf, the sendoff was downright bizarre. The night included a New Orleans-style second line jazz band, memorial cards, an open bar and even a priest—whose business card actually reads Brandon Armstrong, a comical special event speaker. Armstrong delivered a reading that revealed a lot about the agency, referencing at one point, the furor over its 2015 GoDaddy Super Bowl spot in which a lost puppy is found—only to be sold.

“There is a time to do a Super Bowl spot about a lost puppy, and a time to answer phone calls from angry grandmothers who want you dead,” Armstrong said. 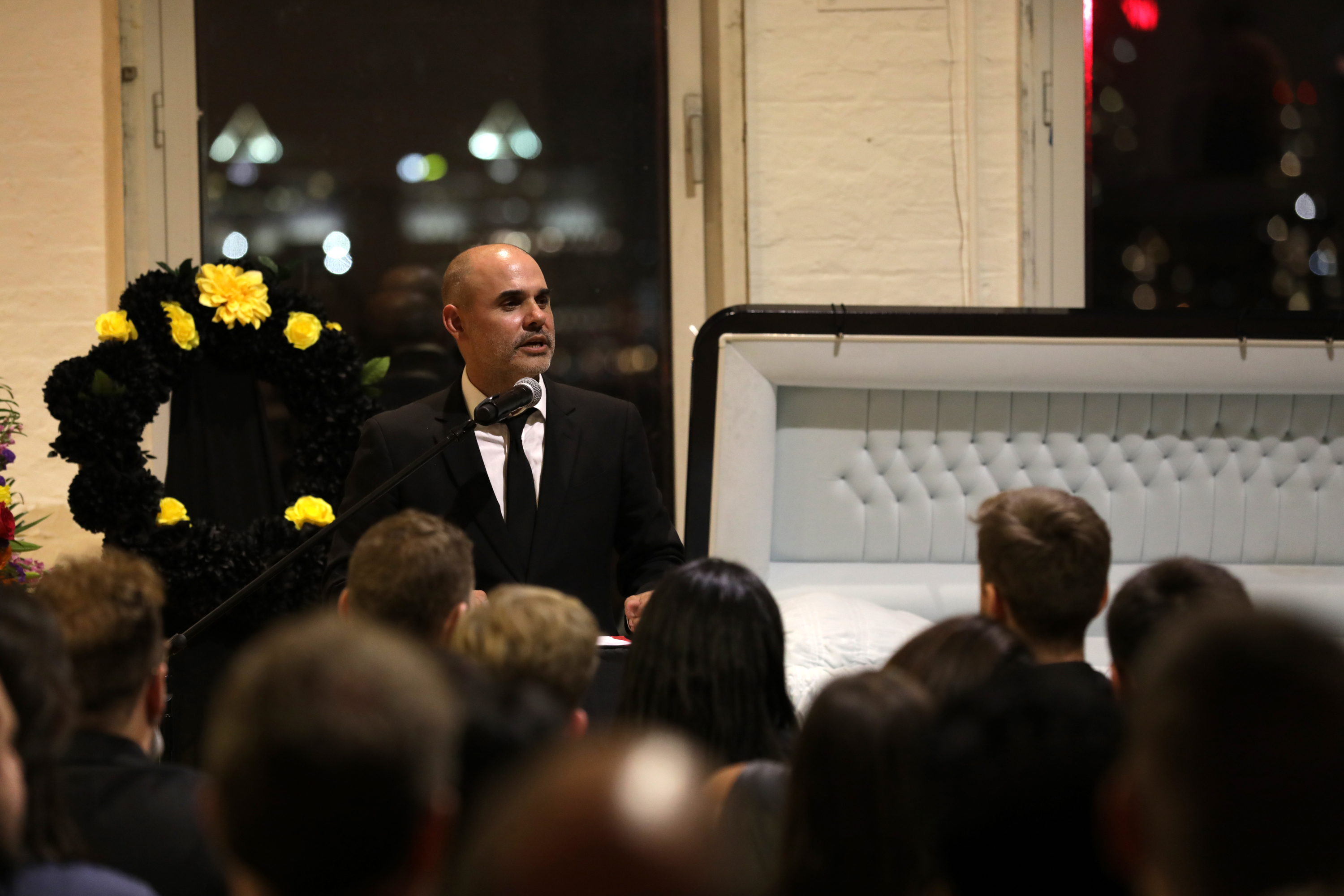 Gerry Graf speaks at the funeral for Barton F. Graf 9000.

There were jokes cracked at the expense of Graf (the mouse in the casket was a nod to the shop's "Dead Mouse Theater" ads for Tomcat), the agency and even journalists—Graf mocked in his speech reporters’ overuse of the words “weird and quirky” in their descriptions of Barton F. Graf through the years. Still, a sadness hung in the air, not only for Barton F. Graf, but the "death" of this award-winning creative shop was seem by some as a bad omen for indie agencies increasingly bogged down by client budget cuts and shifts to project and in-house work.

“I’m not really sure how eulogies work, but I imagine it’s when people just stand up here and air their grievances to make themselves not feel so fucking sad for a minute,” Barton F. Graf Creative Director Kasia Canning said in her speech to the room. She roasted the agency, reminiscing about certain memories Graf probably would have wished she hadn’t, such as when one employee’s Airbnb had bed bugs on a shoot because they “couldn’t afford a hotel.” Canning also brought up “the bathroom situation,” explaining how the door to the women’s lavatory at 62 Madison Ave. was so hard to open, she just held her “pee until I got home.”

Canning was Graf’s last hire. The other two speakers, the aforementioned Ianno and Smith, were Graf’s first creative hires. Ianno left Barton F. Graf in 2018 to freelance and Smith originally departed for Droga5 in 2017 then spent a year at TBWA/Chiat/Day before also taking the freelance route this year. (Ianno also once  dressed as a town crier to personally deliver a Barton F. Graf press release to Ad Age.)

Smith (pictured next to Ianno below) discussed how he met Ianno, when they were both interns for TBWA, and bonded over their mutual aspiration to work for Graf, even though he had “just got fired," from Saatchi & Saatchi as chief creative officer. He said he imagines that Graf hired him and Ianno at the time because they were “affordable.”

“When he hired us, Barton F. Graf wasn’t an agency,” Smith said, choking up a bit at this point, “but it was an idea. Gerry had an idea and it became an agency which is fucking amazing.”

And even though Barton F. Graf isn’t an agency anymore, he continued, “it’s still an idea.” 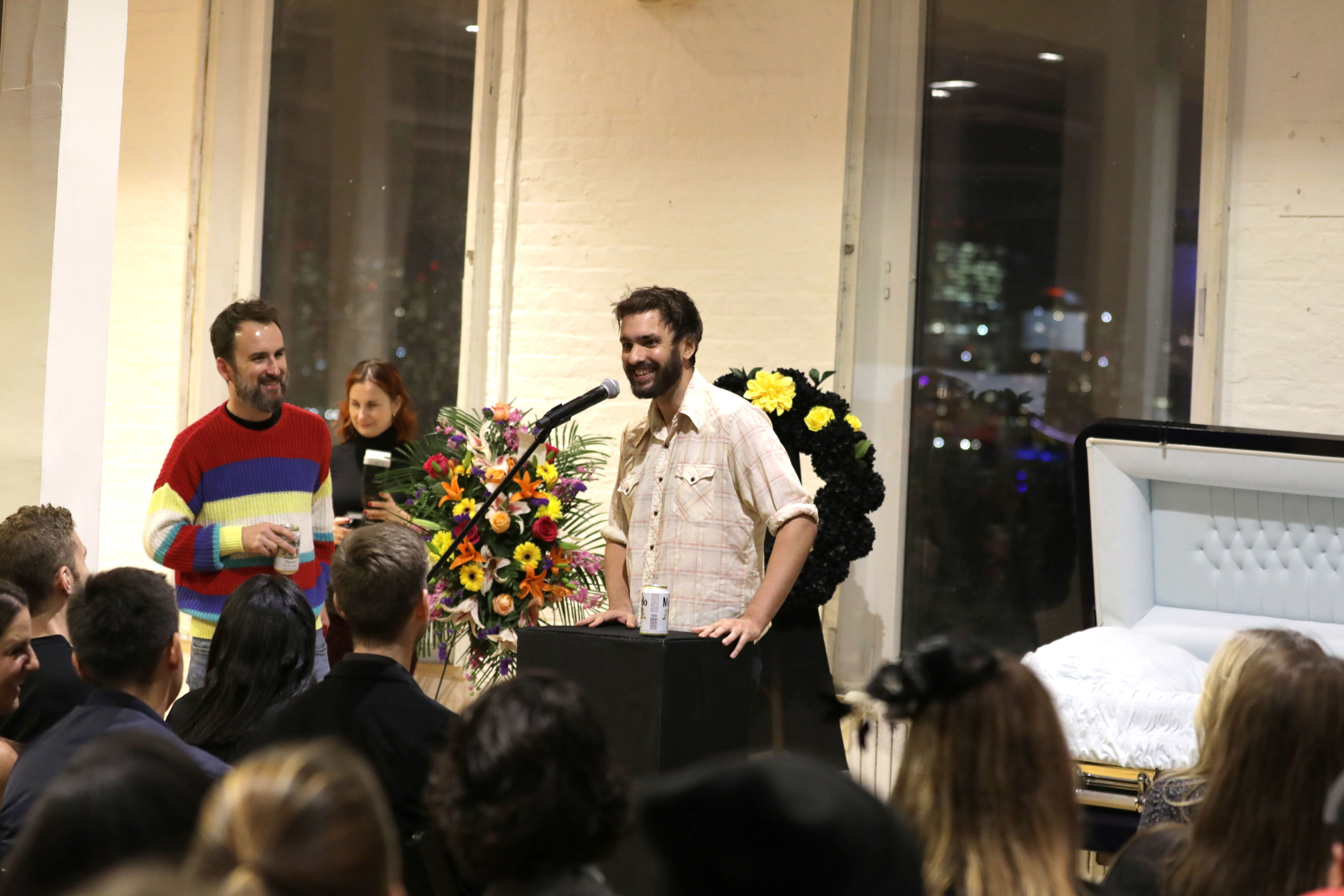 Graf himself was early in the evening trying to fight back tears, and said that the idea to throw a funeral came from his employees, which made him feel like a “proud father.” He said later to the room, running the agency was “fun and it was really, really, really hard.”

“We were independent from investors, we were on our own, [we had] the constant fear of trying to come up with a great idea,” Graf said. “It was just hard, hard, hard.” Yet, "I think we made a special place,” Graf said, “a place that was different than any other place. We definitely did not do what were told.”

That last sentence elicited a chuckle from Walt Frederiksen, senior director of advertising at Little Caesars. Barton F. Graf began work on the Little Caesars account in 2012 and would go on to instill offbeat comedy into the brand’s campaigns, inspired by ads like 1989’s “Origami” from Cliff Freeman. Some of Barton F. Graf’s most recognizable work for the company featured consumers rejoicing over the brand’s $5 Hot-N-Ready pizza, along with other surprising things, like fish and a dachshund. The shop is credited with bringing the brand’s bizarre personality beyond TV to other platforms. Such work included an app that wrapped users’ Twitter feeds in bacon and an integrated campaign that invited consumers to lash out on social media at an inexperienced Little Caesars exec for taking away its Bacon Wrapped Crust Deep! Deep! Dish pizza.

Little Caesars is now searching for a new creative agency.

Some of the estimated 200 mourners included the walking dead—Barton F. Graf's current employees, who are wrapping up a few projects before the doors close—and some of Graf's former colleagues and peers including BBDO Chairman and Chief Creative Officer David Lubars; McCann Worldgroup Global Creative Chairman Rob Reilly; Collins Chief Creative Officer and Founder Brian Collins; and Agnes Makush Daly, a founding member of Barton F. Graf and now head of creative management and recruiting at Mother. Graf’s wife and son were also there—his daughters sent him texts, which Graf jokingly said he knows they only sent at their mothers’ prodding. (Daughters seem to provide a certain sense of humility to their creative fathers. Droga5 Founder and Chairman David Droga recalled during his keynote at Ad Age’s Small Agency Conference in New Orleans this year how when he showed off his Wall Street office, emblazoned with the family name and flag, to his son, he looked on in awe. His daughter, he said, told him to “take it down a notch.”)

“In an industry full of people who are all talk and no talent, Gerry Graf is all talent,” Collins said. “On one side it’s sad to see this chapter close but on the other side, I can’t imagine what’s next for him. He’s the real thing in the world that needs more real things.”

Graf told Ad Age he’s not sure what is next as of yet, he has “some time to think about it.” But what he did at Barton F. Graf was “worth it.”

“We never played it safe,” Graf said to the crowd. “Everyone says you have to play it safe so you don’t die … whoops. So we died, but what a fucking life, right?”