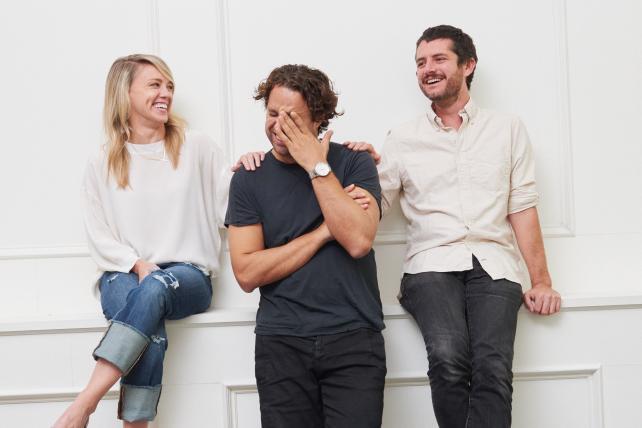 Now here's an interesting development: Office of Baby is changing its name. It will now be known as Interesting Development.

Office of Baby was founded three years ago by former Goodby, Silverstein & Partners New York Executive Creative Director Paul Caiozzo and Creative Director Nathan Frank, who had nowhere to call home when their agency closed its doors. In a seat-of-the-pants move to accommodate clients who continued to ring, they opened up shop as Office of Baby, which since has become known for its out-of-the-box ideas for clients such as ZocDoc, Streeteasy and luxury bedding brand Parachute.

At the time of its founding, the name seemed logical. "We wanted something that was spiritually aligned with who we are," Caiozzo says. He says that he and Frank struggled with the right name until one of their clients pointed out to them, "You come to every problem like you're coming to it for the first time. You are endlessly curious. Sometimes you make us feel uncomfortable, and sometimes you are a bit of work. That all sounded like a baby to us. The office part was just to make it a little more serious."

But now the "baby" has grown up. "It finally felt like the agency we always wanted to build, and it felt like the best way to move it all forward," was with a new name, says Caiozzo.

The name Interesting Development came about because "We're united in a belief that brands can make the world a more interesting place," says Caiozzo. "The only defensible stance is to really say something only you can say in an interesting way."

Caiozzo, who also previously worked at agencies like TwoFifteen McCann and Crispin Porter & Bogusky serves as chief creative officer, while Frank will serve as creative director and head of brand development. Tamera Geddess, who has held stints at agencies including Wieden & Kennedy and Droga5 and brands such as Levi's and Tribeca Film Festival, serves as managing director.

Interesting Development centers itself around brand design, brand cultivation and brand-led invention. Its best example of brand invention may be its award-winning pharmaceutical brand Help Remedies, a pharmaceutical line known for its simple, no-nonsense packaging and branding that stood out in cluttered drugstore aisles. Frank was a co-founder, while Caiozzo helped to develop the brand creative. For online medical booking portal ZocDoc, the agency has developed product-driven ideas, such as creating a new streamlined insurance card to take the confusion out of coverage for both patients and doctors, as well as patient online search portal that understands patients' symptoms, described in colloquial terms.

Key to the agency's strategy is to find the thing that sets apart companies on its roster. "The first thing we do with any client is get inside there and figure out the most interesting thing the company can say for itself that is pure and undeniable," says Caiozzo.

For home search platform Streeteasy, the agency created colorful, comical ads that playfully remind New Yorkers of the torture they put themselves through to live in the city, while ads for the luxury bedding brand Parachute cheekily point out to hard-working 9to5ers the alternative to their awful morning commute -- staying in bed.

In the case of Parachute, it "exists in markets that are totally religiously devoted to striving and working hard at all costs, but it represents the opposite idea--that it's OK to be a sloth and not do anything," says Frank. "That perspective felt really fresh, especially when you're in a subway smashed into a car with 500 other people."

Since its founding, the agency has partnered often with start-ups, an experience that has informed its fluid approach to collaboration--something that has increasingly become the norm for new shops opening up today. Product incubation "is that part that we all get really excited about," says Geddes. "It allows us to go through what our brand partners are going through."

"One of the big learnings we've had about working in modern way requires not having a set process," says Frank. "Our clients have such vastly different needs we have to reinvent our process with every relationship." That includes having its team embedded at clients' headquarters, or even serving as interim CMOs.

The company currently consists of 10 full-time staffers along and works with a network of freelance staffers. "We've hit a point where we need to grow, so we do have open positions across every department," says Geddes.

Currently, the agency is preparing to debute a new campaign for Parachute and is now working on a new in-house created product for the wedding space, set to debut in 2019. Other clients on the roster include Artsy, Capsule, Etsy, Google, Siggi's, VitaCoco, Zola and and Zulily.