How a Tiny Tennessee Distillery Created the Largest-Selling Whiskey in the World
READ THIS NEXT
Opinion: Will Sorrell's exit help creativity regain center stage?
Jack Daniel's 'Our Town.'

"I didn't know we owned land in Tennessee," said our then-teenage son as my wife and I returned home one evening. "The Sheriff of Moore County called. Said there were poachers on our land."

Well, not exactly, I explained. I told him this was a promotion -- sort of a secret society -- that Jack Daniel's had created to recognize those in business or entertainment who are outspoken in their fondness for their product. Loyalty is rewarded with the deed to "an unrecorded plot in The Hollow, Lynchburg (pop. 361) Tennessee" -- and the designation as a "Tennessee Squire."

The astute campaign that built the brand, "Postcards," told stories of Lynchburg and the old-time method of making whiskey. Deceptively simple, it began in 1954 and ran in U.S. newspapers and magazines for over four decades. Probably the longest running commercial campaign in advertising history, it created that rare marketing jewel: an enduring, iconic brand. The campaign continues today in the U.K. in subway posters, and in TV commercials in the U.S. and around the world.

One of only two ad men to openly praise the campaign at the time, advertising giant David Ogilvy, wrote the distillery: "If there is a better campaign in your industry, I have never seen it. Indeed, I would rank it among the half dozen best campaigns in the history of advertising."

The personality was set in an early creative brief:

Jack Daniel's Country is well-rounded hills, untroubled skies, elm shaded lanes and long shadowed cattle astandin' in the corners of meadows. It is old families and flowered front porches. Dirt roads. Screen doors. Sunlight slanting on weathered barns. Cowbells that are rung when it's time for dinner and fresh baked pies simmering in the kitchen.

"We're not selling a bottle of booze," said the creative director. "We're selling a place." As in this ad from 1957.

A SQUEAKY GRAIN WAGON bringing a neighbor's grain to Jack Daniel's Hollow is about the only thing that ever stirs up our ducks. What attracts ducks to the Hollow is our spillings of fine grain and cool, iron-free water. But what keeps them here is our quiet, unhurried way of life. You see, we still make old-fashioned Tennessee whiskey just the way Jack Daniel always did. That calls for slowly Charcoal Mellowing it to a sippin' smoothness. And that "extra blessing" takes too much care and patience for much bustling around.

ONE OF OUR FAVORITE SITTING PLACES is under the sign Jack Daniel and Lem Motlow put up over a century ago. Jack Daniel settled on this very spot in 1866, for here's where he found ironfree water perfect for his needs. The spring still flows at our distillery today, not ten yards from where these gentlemen are chatting. And we still make whiskey the way Jack and Lem once made it, charcoal mellowed drop by drop. Keeping their sign in place keeps us faithful to their old methods. A sip, we believe, will keep you faithful to them too.

Another ad congratulated Mrs. Mary Bobo, manager of the boarding house, on her 99th birthday. A note in tiny type suggested readers might like to send a card. She received 40,000.

A campaign now extending over an astonishing six decades is the product of many hands, some from unlikely places. The first director of advertising, 27-year-old Art Hancock, came from an agency in Peoria, Illinois. Hired because he was not "a slick, tricky ad man," Hancock was captivated by the magic of the Lynchburg distillery. He called it "a marketing Camelot."

Gardner, a St. Louis agency with a roster of Midwestern clients, created "Postcards" in 1954. Appreciating how hard it is to come up with good advertising, Hancock cautioned his people not to nit-pick: "Don't tell them how to do it. Hire great people, and get the hell out of the way." Hancock pushed beyond print into direct mail (The Tennessee Squires), plant tours, outdoor, and PR. Integrated marketing before the term was invented.

Losing the Ralston-Purina account led to the acquisition of Gardner by New York-based Wells Rich Greene. Advertising legend Mary Wells inspired the Gardner holdovers at first, but the merger eventually foundered on a clash of cultures between the New York agency and Midwestern advertisers. To WRG, Jack Daniel's was a small account. What's more, they wanted to change the campaign. Loyal to their own, the distillery encouraged key staffers on their account to start their own agency.

Copywriter Ted Simmons and account men Bill Durham and Les Diveley opened their agency, Simmons Durham, with a staff of ten and two cornerstone accounts, Jack Daniel's and PayDay candy bar. The agency remained small -- it never had more than 35 employees -- yet created the strategies and advertising that carried Jack Daniel's beyond the U.S. and around the world. In 2001, they were acquired by Boston's Arnold Worldwide, which creates the advertising today under the guidance of creative director Wade Devers, president Pam Hamlin, and managing director Paul Nelson. "Still the same story," says Devers. "The values of the town and the old distillery."

Simmons describes his approach to writing Jack Daniel's ads as "wanderin' around." He would sit on the bench in front of The Iron Kettle restaurant, wander next door to the Farmer's Co-op and try to hear what the farmers were talking about, wander into the bank, then up to the hardware store to sit with Clayton Tosh by the pot-bellied stove. Then he'd visit Tolley's Wishy Washy laundromat, named after one of the first head distillers at the distillery. Or have a lemonade at the White Rabbit Saloon, which no longer serves alcohol since Moore County is bone-dry -- an ironic fact, celebrated in one commercial.

After wandering, he would go back to the old office -- the original office of Jack Daniel and Lem Motlow -- and try to imagine what these men might say about what was happening in Jack Daniel's Hollow.

Simmons started as the copywriter at Gardner soon after the campaign began, and became the keeper of the flame. In addition to hundreds of print ads and many TV spots, he wrote countless presentations on how the brand achieved its iconic status. When he started, nobody wanted to work on the account -- it was barely national, and there was no opportunity to do TV. He's in his 50th year on the brand, now as a consultant.

The Illusion of Discovery

While "Postcards" was a solid campaign, few would have predicted it would be a world beater. But there was a magic, captured in a early 1970s film, "The Illusion of Discovery," created by Dave Bascom, a retired San Francisco ad man who admired the campaign (and admitted he liked to "partake" of the superlative product.)

Bascom had developed a fishing analogy to explain the draw of the advertising. A fisherman stumbles on a spot loaded with fish. He is eager to tell others that he has discovered this secret fishing hole, but not to go "blabbing" about it (knowing of course that they will.) The fishing hole has always been there, but there is the illusion that he discovered it.

Jack Daniel's advertising is a little like that, Bascom argues. The reader has the feeling that only he sees it. Black-and-white ads. Less than a full page. No headlines. Snapshot-like photos. No testimonials. No country club scenes. At the height of the campaign, there were 20 ads a year in over 60 publications in the U.S. alone. The pictures always different, the words always different, but the message always the same.

The American image played well around the world. Local managers would say none of this dumpy advertising will work in our country or why can't we have a big New York agency. Some markets wanted lifestyle advertising. Always polite, the Jack Daniel's people would suggest they test their campaign against "Postcards." "Postcards" always won.

The obscure little distillery starting winning recognition for its whiskey against the world's most noted distillers at the World's Fair Exhibition in St. Louis in 1904. It was not a fluke. Over the years, it won seven international gold medals.

But the advertising that built its recognition and reputation? Not so much. No Clios or Cannes Lions. Overwhelmingly, the prestigious industry awards were piled on flashier creative work, like Volkswagen and Alka-Seltzer.

That didn't really bother the folks at Jack Daniel's. They were a long way from Madison Avenue, and their product continued to move off the shelves. From 100,000 cases in 1955 to over 12 million cases today (for its base Black Label) and worldwide leadership. One of the great advertising success stories … and one of the least recognized.

There has always been a modesty about the marketing. "We deserve less credit that we get," said Hancock. "What we have here is a product leading us by the nose."

Just before New Year's one year, I received a small burlap bag of black-eyed peas with a letter saying that down in the Hollow, it is good luck to celebrate with hog's jowl and black-eyed peas -- and a recipe for cooking the peas. "You'll have to get your own hog's jowl."

Along the way, glasses with Tennessee Toasts printed on the side.

May you always have

Red-eye gravy with your ham

Hush puppies with your catfish

And the good sense not

To argue with your wife.

And there are still few awards for the advertising. But that's kinda the point. 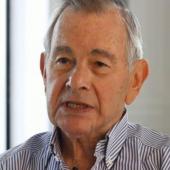 Kenneth Roman
Squire Kenneth Roman (plot #3853b) is a former Chairman of Ogilvy & Mather and author of â€œThe King of Madison Avenue: David Ogilvy and the Making of Modern Advertising.â€ He has no connection with Jack Danielâ€™s other than (like David Bascom) admiring the advertising and â€œpartakingâ€ of the beverage.
View all articles by this author