(And Therefore Will Probably Not Like This Open Letter) 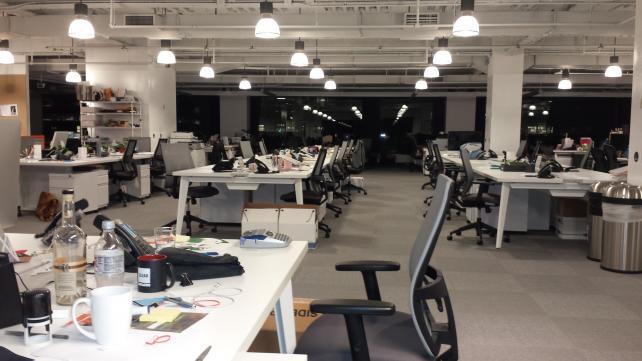 We just renovated our office. And guess what we did? Yep, exactly that.

We destroyed the offices. Took down walls. Put everyone in the middle of the space. Shared desks. A few meeting rooms. But mostly all open. Just right out there in the open.

In fact, we didn't leave during construction. We didn't work from home. Or rent space. No, we all moved into two large conference rooms and our lobby. Yep, 60 people in three spaces stealing each other's gum, playing music, papers flirting with other papers, hearing someone argue with their mother or argue with their boyfriend or argue with another employee. Come to think of it, we have a lot of contentious people here. And they are all right there, out in the open. And sure it was cluttered and crowded, but in a sick way -- like Mole sauce or Kathy Griffin -- we kind of enjoyed it. And when the space was completed it felt as rewarding as going from a prison to The Peninsula.

We know what you're thinking. Another agency jumping on the open-office bandwagon. Idiots. They will be unproductive. They will hate the space. Hate each other. Haven't they read all the articles about how awful it is to work in an open space? What's funny is that after we announced the move to an open space, I got maybe 15 emails from 15 different employees with those articles telling me why an open space will hurt this agency. I started to read those articles but I got bored.

We know the statistics. That 94% of employees hate open offices; 83% of productivity drops between the hours of 2 p.m. to 5:30 p.m.; that 67% of people don't like the smell of the Indian food being consumed by the person who sits next to him or her; and 35% of people end up not coming in and instead stay at home to watch "Judge Judy." Only 20% like open offices, and 10% of those are people delivering food.

Yep, we got it. Know why people hate the open office. Just last week we all had to listen to Maroon 5, not because we wanted to but because one person wanted to.

But you know what -- we love it. Yes it's loud. Sometimes hard to concentrate. And true, curry is a very intrusive smell. We don't have a percentage to throw around. And besides, why throw math at human interaction? Actually, we do have a statistic. And that is two. Two people admitted that they didn't want the open office and then admitted after it was done that they were wrong. They like it. You know what the odds are of someone in advertising admitting they were wrong?

But why quantify what we don't like when we prefer to instead observe how we act. And here's how we act:

We don't rely on email so much. We talk. Email follows up a conversation instead of initiating one, or even worse, substituting for one.

We don't just share ideas. We wad them up and toss them at each other, blurt them out, interrupt and criticize and applaud them. We talk more. Walk around. Offer suggestions en route to the bathroom. We don't hide in our offices. We don't hide behind walls. We are exposed and sometimes that fear puts pressure on us to be better in every aspect of our job.

We are happier. We are less complacent. Less bored. We are stimulated. And we are getting to know one another better, which makes a culture that really is only about people and ideas stronger.

So yeah, we leaned in and Cheryl Sandburg-ed the crap out of the place (That's what she meant by "lean in" right? We didn't read the books. We can't have books. There's no offices.).

Spare us the statistics. How our work will get worse. Employees will be unhappy. And our days are numbered until we put the offices back in.

We are a proud open office.

At least after the first month.