What's this?
This content is created by an Ad Age Publishing Partner. Find out more about this program.
Beautycon Media

How Beauty Became a Cultural Movement for a New Generation

Pivotals, a term we created for the sweet spot between Gen Z and Millennials, is possibly the most influential generation to date. This is critical to marketers as Pivotals refuse to accept traditional identity categories. More than 61% use at least one "niche" descriptor to identify themselves. Which niche? Anything and everything, from refugee to sexually fluid to mixed-race.

As part of this, Pivotals are actively redefining beauty to challenge outmoded ideas of race, gender, sexuality, politics and even religion. Beauty is no longer just a part of culture. Beauty now defines culture as Pivotals embrace their niches.

Niche is the new mass.

Recognizing the influence of this culture-defining group, Beautycon conducted a study, FOMO Volume One, in partnership with Culture Co-op, to take a deep dive into this generation's cultural trends that are driving a bold revolution in beauty.

FOMO is a data-driven look at what's shaping the world of beauty and self-expression among this influential generation. In addition to interviews with attendees at Beautycon's festivals in Brooklyn and Los Angeles, as well as chats with influencers in buzzworthy cities stretching from Portland, Maine, to Charlotte, North Carolina, to Austin, Texas, we also collected online surveys from 1,000 Pivotals, ages 13 to 34, across the country. They all had plenty to say. For example:

Living in a post-woke world, Pivotals give new meaning to self-awareness. They see spirituality as an extension of their activism. Out of more than 15 phrases, "truth-seeking" and "positive" topped their list of terms that best describe them. They've sought products infused with good vibes from brands such as de Mamiel, Sodashi and Plantfolk Apothecary. Three-quarters of them asserted that "for young people today, it's cool to be sober." Doesn't that make you hopeful for the future?

As the world grapples with extreme perspectives, Pivotals are shaping their values and communities by pushing past conventional definitions of beauty. For instance, two-thirds of young people say they're "interested in learning about ancient beauty and health practices from other countries." That's why Chinese fire facials, the goat milk detox that originated during biblical times near Jerusalem and Indian turmeric have caught on.

As research has shown, beauty influencers have officially become the single most effective way to connect with Pivotals. They see beauty as more than makeup products or application tutorials—it's a springboard to create new communities. After all, 81% of them say beauty isn't just about products, it's about cultural expression. For this trailblazing generation, it's their cultural movement, and we're living in it.

Beautycon Media is the global community for content creators, celebrities, fans and brands to come together to celebrate all things fashion, beauty, style and lifestyle—the passion points of Gen Z and Millennials. We create meaningful connections for these communities through our Beautycon Festivals, Beautycon Shop and Beautycon Digital, with the goal of redefining beauty and challenging the status quo while creating a “style” destination for all. For more information, visit Beautycon.com. 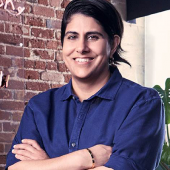 Moj Mahdara, co-founder and CEO of Beautycon Media, has built the company into a globally recognized community for Gen Z and Millennial content creators, celebrities, fans and brands, providing them with a space to come together and celebrate all things style and beauty. Beautycon Media also had the honor of curating the first-ever Creator Town Hall for Hillary Clinton.Mahdara's successes have been nationally recognized, being named in Cosmopolitan and Marie Claire's top women lists in 2015, as well as Fast Company's "Most Creative People" list and The Hollywood Reporter's "Top 25 Most Powerful Digital Players" in 2016.