Nominated for eight Academy Awards, Gus Van Sant's Milk is known as a superbly crafted biopic of the late San Francisco politician Harvey Milk, highlighted by Sean Penn's celebrated performance in the title role. In all the gushing reviews, though, you'd be hard-pressed to find mention of the visual effects, and that suits Chel White just fine. 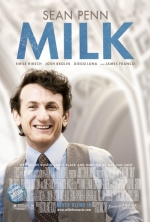 White, founder of Portland, OR-based Bent Image Lab, was the VFX supervisor on Milk after working on a number of other Van Sant films including My Own Private Idaho, To Die For, Even Cowgirls Get the Blues (in which he also had a bit acting part as a brain surgeon) and Paranoid Park. And he's quite happy to note that much of their work on the film is largely invisible, whether literally or seamlessly existing within the story.

We spoke with White about Milk, working with Van Sant and more.

How did you come to work on Milk?
I've known Gus since about 1986 and the first movie of his I worked on was My Own Private Idaho in 1991. So yeah, I've been working with him over the years and originally got involved in VFX supervising with him. He came to us with some visual effects he wanted us to create for (Milk). As filmmakers I think we enjoyed and respected each others' work back in the '80s and I think part of it just came from that he trusts my aesthetic, which is a nice place to be with someone so talented.

Where was the most VFX work done in the film?
One was a phone tree that occurs about halfway in the film. One of the younger characters starts a phone chain and it's meant to represent a grassroots, getting the word out effort for a rally. There's also a brief scene of falling ballot chads, during an election. But the part we were most involved in is largely invisible. Which is a good thing. In over 30 shots we went in and digitally touched up the prosthetic chin on Sean Penn's face. It's a very well done prosthetic but certain angles betrayed its realism from time to time. We also went in on a number of shots to make him look younger by bringing his hairline forward a bit and softening some of the wrinkles around his eyes. 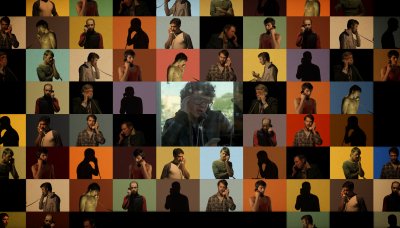 "Phone tree" from Milk.
Have you done much other work with Van Sant?
It's funny because it started back in the early 90s, slowed down, and came back around in about 2006, and the visual revolution had happened in the meantime, in terms of new technology. So there was a good 10 years there where I didn't do any work with him, which had a lot to do with him doing movies outside of Portland. Now he's sort of come back with Paranoid Park and others since. We did a short for him in 2007, with a lot of visual effects, called First Kiss and it was commissioned, along with shorts from (33) other directors, by the Cannes Film Festival to be part of a collection called Chacun Son Cinema(or To Each His Cinema).

Have you done much other feature work?
I never really set out to get into VFX supervising, I just got into it because I liked working with Gus, and having done animation and other filmmaking on my own, it felt like a very comfortable step into that realm. We also did some stuff on I'm Not There, where we did an animated whale sequence early on in the film and then all the photo 1960s style pictures that slide in and zoom in on the record cover. It was the sort of effects that are no big deal today but back in the 60s it was all in-camera. So we went back and actually produced the shots exactly as they did back in the day. We just wanted that authenticity of shooting these things in a down camera set-up and moving things in.

How does your approach or technique differ between films and commercial projects?
The fun thing about working with Gus, which in some ways is its own challenge, is that he's not really that interested in images that are tricky. He prefers simple concepts that are not always simple to execute but having the effects fairly invisible and not encroaching on the shot. It's a place I respect a lot because it's keeping with my own aesthetic as a filmmaker. I think my stuff is stylized but I don't do a lot of tricky effects like green screen or CGI. That stuff's great, but I think both Gus and I grew up making films for next to nothing so we have a certain aesthetic based on that. It's funny because sometimes we'll be talking about a title sequence and say, What about this? and he'll say, "Nah, just do it Helvetica, straight on." So it's a study in minimalism sometimes.

But one of my favorite things we've done for him was a barn crash in My Own Private Idaho. It was special because it was a story and film that was very close to Gus' heart and that image in particular is something that's a reoccurring theme for him. It's early on in the film and River Phoenix is getting a blowjob in a hotel and at the moment of climax he sees this barn coming down and crashing onto the road in Idaho. So we created a weathered barn the size of a doghouse, and shot it high-speed dropping from a crane. It was all in-camera and worked with simple ideas, like taping off the lines in the road to make the perspective work. It was great to be a part of that.