How KFC Reinvented the Fast Food Toy Meal in China

Ogilvy Shanghai Created a Mobile App for the Promo That Got 1.3 Million Downloads in a Month
READ THIS NEXT
Following ‘Viva La Vulva,’ Libresse goes inside the womb in a powerful new campaign

The trinkets found in fast food chains' toy meals haven't changed much over the decades.

After you unwrap the toy – often, a figurine with an entertainment tie-in – you generally can't do much with it besides set it down somewhere and look at it, said Sascha Engel, creative director and deputy head of digital for Ogilvy & Mather China.

That's the challenge that came to mind when KFC, the biggest fast food chain in China, asked Ogilvy Shanghai to come up with a new national promotion, something digitally led and involving a toy meal that would appeal to millennials.

(Toys meals aren't just for kids in China; KFC also has a gift meal category aimed at teenagers and young adults who are into cute collectibles. This campaign was aimed at the 16-to-26 set.)

"We really thought about 'how can we evolve the experience?'" Mr. Engel said. "(So) when you get that toy together with the meal, that's just the beginning."

A strong mobile experience was key: China has 557 million mobile internet users, and many teenagers and young adults can afford the inexpensive Android smartphones that have flooded the market.

The campaign also came at an important moment for KFC, which was an early entrant to the China market and has more than 4,800 locations here. Yum Brands, the parent of KFC and Pizza Hut, reported Wednesday that fourth-quarter sales in China slid 16% at locations open for over a year, after a minor supplier was investigated for providing expired meat. Yum quickly cut ties with the supplier when the allegations became public in July.

KFC's campaign, which started in late December and runs through Valentine's Day, blended hot marketing elements of the moment, including a mobile game, offline-to-online experience, shareable selfies, K-pop and a cute boy band. 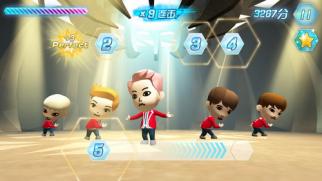 KFC's mobile game has logged a total of 33 years of playing time.

The 10-member band, called EXO, has South Korean members and Chinese members, and they're marketed as aliens with superpowers. Most of the app's experiences focus on the half of the band that sings in Mandarin, called EXO-M.

Henry Ho, VP-Ogilvy Shanghai, said that "EXO fans are such a big crazy group of people in China, more than 40 million strong, and they are willing to spend their time and effort chasing after EXO, so we believe EXO is a strong engine to further boost the impact of the campaign."

Diners who purchased a Korean-themed combo meal for an average price of $6.56 received a figurine of one of the band members, with a QR code on the bottom. After downloading an app, they could use their smartphone to take a picture of the QR code and get free content. The app provided a mobile game with 75 levels – a dancing game set to the band's original music, where people had to tap the screen in time to the beat.

The app also offered other fun content, like images to superimpose on fans' selfies, so it would look like band members were feeding them fries or giving them red roses. Fans could set EXO alarm clocks (one has a singer asking, "Did you miss me?") There were stickers to share on mobile app WeChat, and daily cartoons featuring the band, where people could insert their own photo into the scenes and share them.

People with a figurine got immediate access to all the content, but the mobile campaign wasn't limited to them. Anybody could download the app and unlock content by playing the game and advancing to new levels.

Within a month, the app was downloaded more than 1.3 million times. And the game alone has logged 33 years of playing time so far.

The digital campaign was supported by traditional media, including TV commercials. On New Year's Eve – which marked the band's 1,000-day anniversary – 10 KFC locations around China held a fan party with big screens showing footage of the band. (Ogilvy shot them for five days.) A few KFCs were rebranded as EXO's "planet."