CMO David Thompson discusses why he photo-bombed Salesforce Dreamforce with a blimp, and the importance of CEO buy-in for brand-building stunts 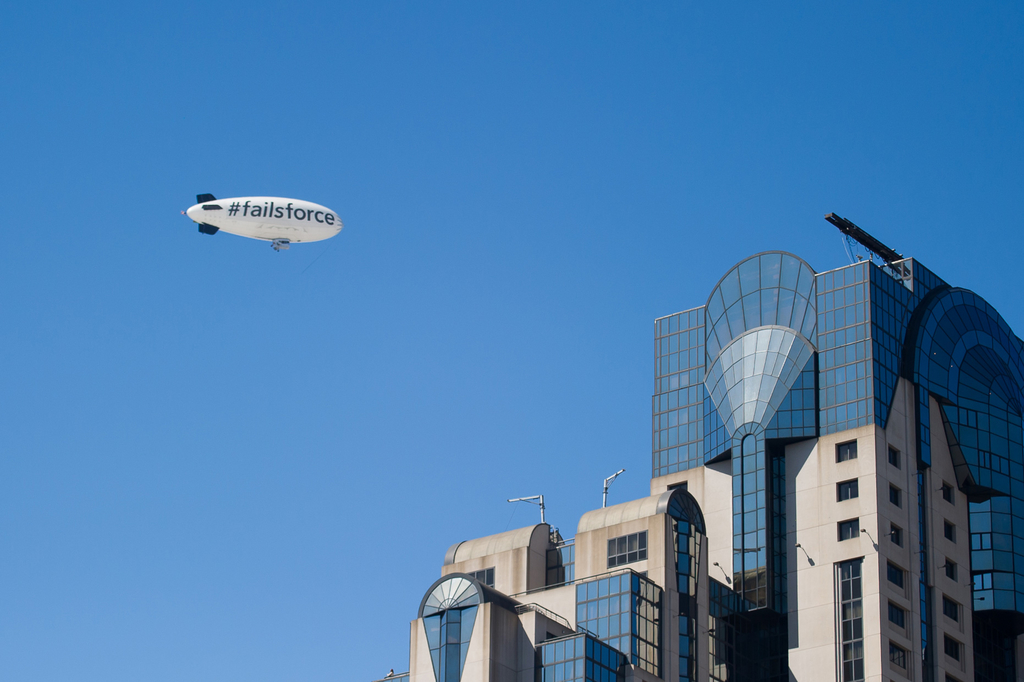 Did Marc Benioff smile when a blimp emblazoned with #failsforce floated by Salesforce's San Francisco tower during Dreamforce in September? The man who organized the guerrilla marketing stunt, Freshworks CMO David Thompson, thinks he could have, since “This is something Marc would have done when he was younger.” Regardless, the program worked exactly as intended, generating outsized attention and dramatically increasing site traffic for this challenger brand.

Along with the blimp, the stunt featured a marching band and “Hit Refresh” pop-up booths that gave away refreshments and yoga class gift cards. Even for Silicon Valley, such an overt attack on the category leader is unusual and fraught with risk. But for Thompson it's business as usual. He's pulled off a number of “we better ask the board” programs over the course of his marketing career. Learn why Thompson feels so strongly about his approach, and what’s required organizationally to make it happen.

Of all your marketing stunts, which was riskiest?
The thing I'm probably most famous for is the RuPaul "Meetings used to be a real drag" campaign for WebEx, because at the time that was just incredibly edgy and kind of socially unacceptable. By the way, that campaign generated a lot of hate mail as well as 10x growth in our revenues that year, the same year we went public. We took our revenues from $2.5 million to $25 million. Even though it was the law of small numbers, it was extremely exciting to the market and our shareholders. And what's interesting to me is, it's funny, because looking back now WebEx was a challenger brand and acted like it. I don't see that now.

Have you ever been afraid one of these efforts would blow up in your face?
Oh, totally. And if I weren't afraid, then there would be something wrong with the idea. The way I acid-test that is, if the CEO doesn't first react like, 'Wow, but oh my board.' If they don't take it to the board, it's not good enough.

Guerrilla stunts seems to be habitual for you, aren't they?
There’s nothing more terrifying to me than being bored, and there’s nothing more boring in most cases than B2B marketing. I was a theater major in college and bring this theatrical consumer approach to B2B by asking, 'What story are you telling, what’s the conflict, how fun is it and how much does it stand out?' And if it doesn't stand out, it's just not worth doing.

How important is your relationship with the CEO to get work like this approved?
It's all about the relationship and whether the CEO has the guts and the derring-do to go out and really make a splash and really tell a story that pops through the noise, which is obviously an extremely hard thing to do in our media environment today. And so renegade marketing is only as good as the renegade mentality of the CEO, for sure.

So, what is the big story here behind #failsforce?
What we're ultimately trying to do with that campaign is to say that SaaS, as you know it today in the cloud and enterprise, is failing the user. And we're also trying to say that the category is failing. CRM as a category, as this top-down, C-suite-driven initiative inside of a company, is failing. We're designing the software for the user and don't care about reports that go to the board. We care about getting our work done more efficiently and engaging with customers more meaningfully.

What are the campaign elements?
It was a fully integrated multimedia campaign. A lot of outdoor around the Bay Area, which was a very target-rich environment for us, especially among startups and medium-sized businesses—which is our sweet spot. We also had radio and digital, applying a ‘Surround them’ mentality. And then we had the big PR lift with the #failsforce blimp. And on our website, we had animated stories about user frustration that we'd identified in the Forrester research.

What were your KPIs?
Obviously, top of funnel was huge for us. We’re building our brand. We’re building our awareness. We’re experts in digital marketing and probably some of the best Google advertisers in the world. We’re obviously trying to get our cost-per-lead down and find the right balance between our investment in awareness and leads. Click-throughs on branded terms tend to be 3 to 4 times higher and more qualified than generic terms. We’re looking closely at site traffic, and of course we’re looking at deals, watching leads turn into actual participation in RFPs.