Why Advertising Is 'Dead Last' Priority at Outerwear Marketer Patagonia

"We have a mission to solve problems in the world," said Joy Howard, VP-marketing at outwear and sports-equipment marketer Patagonia. "That's very much a part of how we engage with consumers."

And that engagement puts a low priority on advertising. It's the "dead last" thing Patagonia wants to do, said Ms. Howard. 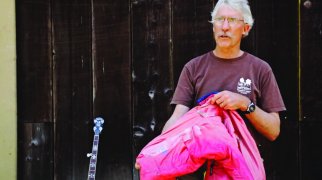 While many retail brands were pitching consumers on buying clothes around Black Friday, Patagonia was urging them to hold on to what they already had in their closets.

The $650 million brand seems to be doing just fine without it. Patagonia recently captured attention with an "anti-Black Friday" short film called "Worn Wear" that encourages consumers to embrace sustainability and fix their clothing rather than buy new items. That holds true to the company's goal of getting consumers to believe in the brand's usefulness. Next year it will continue in that direction with two initiatives: anti-dam initiatives and the sport of fly-fishing.

"The best way to get people's attention is to be useful and show useful information that enhances people's lives but also shows real news," said Ms. Howard, who joined the company in September from Converse, where she held the same title.

One of its "news" initiatives will be a film called "DamNation" to be released this spring. Patagonia founder Yvon Chouinard serves as executive producer of the film, which is devoted to showing why the removal of the nation's dams is important to promote river restoration. The film is pending festival acceptance and will be toured in April and early May, said Ms. Howard.

Empowering women
And while winter is Patagonia's biggest season, Ms. Howard said the brand is now most focused on spring and its launch of fly-fishing gear coinciding with Mr. Chouinard's book, "Simple Fly Fishing," which will be released April 1. Ms. Howard said the book, co-authored by Mr. Chouinard, Craig Matthews and Mauro Mazzo, will "open people up to a new way of fishing."

Patagonia will also release a fly-fishing starter kit and a women's fly-fishing line in April. "Patagonia has a long history of empowering women in outdoor sports," said Ms. Howard. "When it comes to fly-fishing, Yvon feels very strongly the more macho it gets, the less good it is. We really need to make it something that women and younger people can participate in."

Ms. Howard said Mr. Chouinard -- who she called "one of the best fly fishers in the world," keeping in mind his deep passions for surfing and mountain climbing, too, of course -- spent 15 minutes teaching her how to cast lines in a driveway and the next day she easily caught two fish an hour and 40 fish total.

Surfing will be another focus in spring via the brand's sales of wet suits made of Yulex, a plant-based material. Ms. Howard said Patagonia will reissue a book called "Slow Is Fast" written by Dan Malloy, a Patagonia surf ambassador. Ms. Howard credits Mr. Malloy, along with his brothers Chris and Keith, for helping Patagonia start its surf business.
Patagonia does not rely on external advertising agencies to work on its campaigns and it does not have an advertising agency of record. Its in-house team is headed by Dmitri Siegel, global creative director and VP of e-commerce. Ms. Howard would not break out how much it spends annually on marketing efforts.

Not about preaching
Marketing the "Worn Wear" film was Ms. Howard's first project, which she called an evolution of the firm's "Don't Buy This Jacket" campaign from two years ago.

"When I saw the film, it was just a powerful expression of who our Patagonia consumers are, the kinds of lives they live," said Ms. Howard. "We want people to think about quality or quantity and be aware of the impact their buying has … and make people realize it's not about preaching."

She said the response to "Worn Wear" has been very encouraging and that people are interested in learning how to repair their gear, something Patagonia hopes to amplify further. Patagonia also wants to make it easier for people to recycle Patagonia products; the brand already has a lifetime guarantee and she said Patagonia "gets tons of product returned" for recycling.

Meanwhile, its Patagonia Provisions division also recently launched a beer, which Ms. Howard said has exceeded expectations. The company has an interest in food culture because it links back to the brand's sustainability mind-set. Its first product, salmon jerky, which launched in 2012, ties back to fly-fishing, which, in turn, relates to river restoration.

Last May, Patagonia reorganized into a holding company called Patagonia Works, which is dedicated to one cause: "Using business to help solve the environmental crisis." At that time, the company also launched the "$20 Million and Change" fund to help companies bring positive change to the environment.