Amazon racks up the celebrity deals on Prime Day

Amazon is tapping high-profile actors, athletes and social-media sensations like never before to maintain buzz around its summer sale 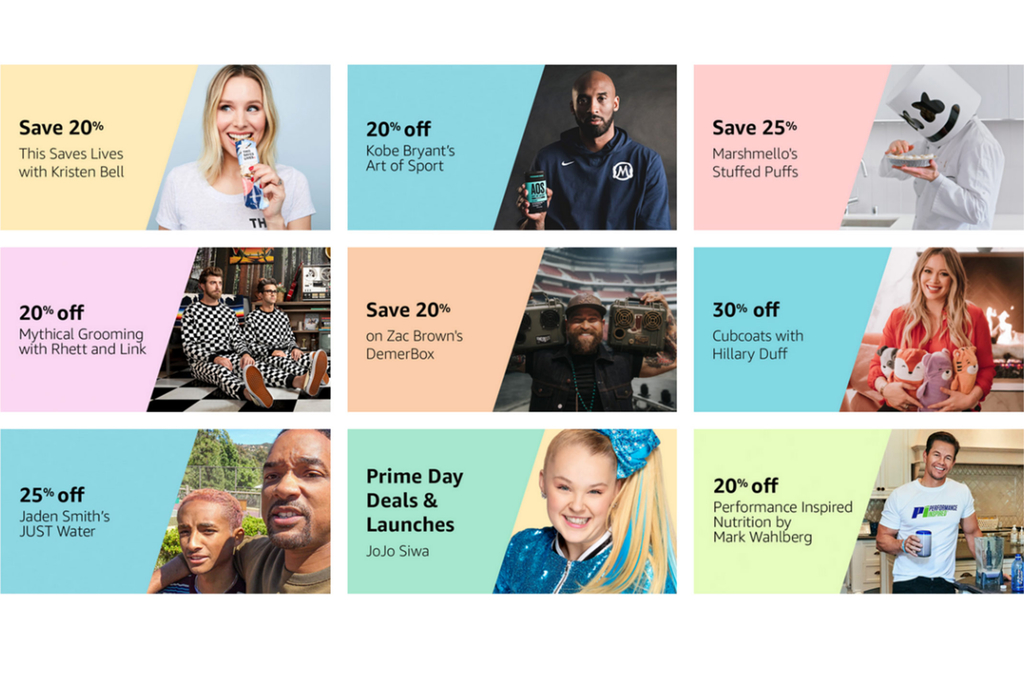 Amazon.com Inc. is tapping high-profile actors, athletes and social-media sensations to maintain buzz around its Prime Day summer sale, now in its fifth year and battling increasing competition from rivals.

Discounted pressure cookers and gadgets just aren't enough to stand out when shoppers can find a flurry of bargains elsewhere. Walmart started a competing four-day sale on Sunday. Target is emphasizing sales on its exclusive clothing and home goods shoppers can’t buy on Amazon. EBay is taunting last year’s Prime Day website outage with a “Crash Sale” offering deals on smartphones, electronics and fashion. And all of them are emphasizing that their deals don’t require paid membership like Amazon. Some 250 retailers are staging their own sales to compete with Prime Day, up from 194 last year, according to research firm RetailMeNot.

So Amazon last week promoted its two-day event beginning July 15 with a Taylor Swift concert and is pushing celebrity-backed merchandise targeting every demographic to keep Prime Day flourishing in headlines and social media. So far it appears to be working.

The sale generated about 12 billion media impressions—views of television and online content about the day—as of Friday, according to Stacy Jones, who runs the entertainment marketing agency Hollywood Branded. That's about the same as for the deal H&M struck with Netflix to sell 80s-style clothing featured in its hit show “Stranger Things,” she says.

Shoppers will spend $5.8 billion on Amazon over the two days, according to Coresight Research. That’s an 11% increase from last year’s 36-hour sale when converted to spending per hour. “Amazon is giving these celebrities the opportunity to sell their brands on a very powerful platform,” Jones says.

The celebrity focus shows how much Chief Executive Officer Jeff Bezos—now tabloid fodder himself in the wake of his high-profile affair and divorce—has changed his thinking about the value of celebrity promotion. Amazon historically relied on customer reviews, which don’t cost anything, to sell products rather than million-dollar pop star endorsements.

A tipping point came in 2016 when Bezos was eager for the public to embrace the new Echo speaker, which  popularized Amazon’s Alexa voice-activated digital assistant. The company splurged on its first Super Bowl commercial starring Alec Baldwin and Dan Marino; it became a big hit, prompting further investments and experiments in celebrity promotion.

Amazon’s “The Celebrity Store” debuted last year with products endorsed by tennis star Serena Williams, Hollywood heartthrob Zac Efron and more than 30 other notables. That pushed Amazon deeper into the influencer marketing realm dominated by Facebook  Inc.’s Instagram, which is adding its own shopping options. Stars are eager to partner with Amazon. Lady Gaga has an exclusive line of beauty products coming soon. Heidi Klum, who already sells bras on Amazon, has a fashion program a la “Project Runway” in the works that’s scheduled to start streaming on Amazon Video next year.

“It’s amazing how much the needle has moved in the other direction,” says Steve Susi, a former Amazon advertising executive and author of Brand Currency. “We were told that Bezos resisted celebrity endorsements because it just seemed so inauthentic and un-Amazonian.”

Amazon going mainstream with its marketing techniques is also a sign of maturation. Amazon launched Prime Day in 2015 as a fresh way to lure new Prime members, who pay monthly or yearly fees in exchange for shipping discounts and other perks like video streaming. In subsequent years it kept the event lively by offering steep discounts on its own devices like Echo speakers and the Fire TV. After it acquired Whole Foods in 2017, Amazon made groceries part of its Prime Day promotions to entice members to buy more food.

This year there’s no must-have Amazon gadget or new product category to push. So Amazon is emphasizing its exclusive celebrity deals like a three-pack of hair bows from JoJo Siwa for $22.99. The teen entertainer gained a following on the Lifetime reality show “Dance Moms,” which she has converted into a YouTube following used to hawk branded merchandise at Target and other retailers.

It’s a new phase of marketing for Amazon as it shifts from winning new Prime members to extracting more money and attention from existing customers by getting them to explore new product categories and sign up for services like music streaming.

Amazon says it has more than 100 million Prime members worldwide, but new subscriptions in the U.S., Amazon’s biggest market, are slowing, according to the research firm Consumer Intelligence Research Partners.

“They can’t keep adding 10 million new Prime members every quarter because everyone has already made up their minds about that,” says Josh Lowitz, co-founder of Consumer Intelligence. “This is more traditional marketing around a big sales event, which is more celebrity driven.”