American Eagle is thriving at the mall

Its popularity is partly fueled by Aerie, as well as its denim business 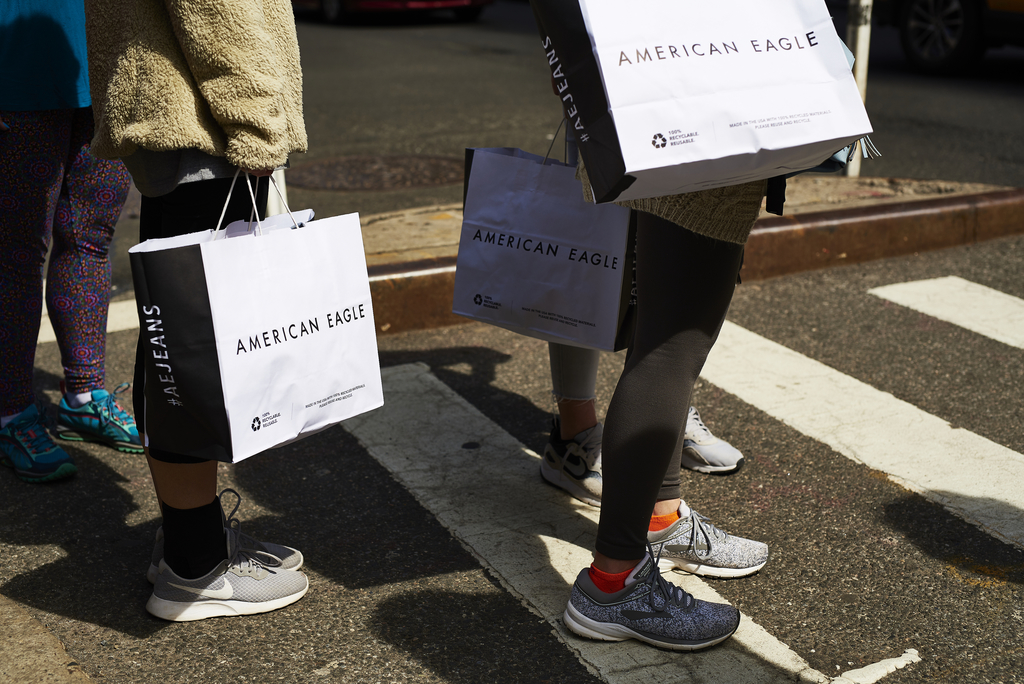 On a recent afternoon, college student Michele Jacobs walked into an American Eagle Outfitters store in Manhattan to buy some pieces from its Aerie lingerie line. And while she left with two bralettes, she also bought a jean skirt and a couple pair of shorts.

“I feel like it’s really hard to not spend money when I go in there,’’ said Jacobs, 19, a rising sophomore at Franklin & Marshall College in Pennsylvania. “The majority of my clothing is from American Eagle. All my jeans are from here.’’

In many ways, the success of American Eagle Outfitters Inc. doesn’t make sense. Most teen retailers have struggled to appeal to the newest crop of young shoppers while e-commerce sites have scattered their once loyal customers. It’s a situation that’s led Charlotte Russe and Aeropostale into bankruptcy and Abercrombie & Fitch Co. to close some flagships and shrink the footprint of its stores. Bloomberg News reported Tuesday that fast-fashion retailer Forever 21 Inc. was said to be exploring a debt restructuring to shore up its liquidity.

Yet American Eagle, which has been around for 42 years, has found solid footing. It’s consistently at or near the top of its peer group for revenue growth and digital sales. Teenage boys and girls continue to say it’s one of their favorite brands, according to Piper Jaffray’s semiannual survey. Investors will get a fresh look at how the company is doing Wednesday, when it reports quarterly earnings. The start of 2019 hasn’t been kind to the U.S. apparel industry.

American Eagle has declined about 4 percent this year, and while its shares are underperforming the benchmark S&P 500 Index, they are holding up better than most peers even amid renewed investor anxiety about the retail apparel industry in the U.S. Abercrombie is down about 15 percent, Urban Outfitters Inc. has dropped about 29 percent, and Guess? Inc. has lost about 21 percent.

Jeans loyalty
Its popularity is partly fueled by Aerie, as well as its denim business, a space where the company has preserved its stature while others have faltered, said Oliver Chen, a retail analyst at Cowen. Jeans are well-priced and once consumers find the right fit, they’re pretty loyal to the brand, he said.

“They’re working from a position of strength while others are not, and that’s helpful,’’ Chen said. “It’s not easy to adapt because teens want variety, so the new trend is no trend.’’

The first American Eagle store opened in 1977 in a mall in Michigan. It wasn’t until 1990 that the company created its private label products, which included men’s bootcut and worker jeans. Signature denim came a few years later.

In a fashion world still dominated by athleisure, competition among retailers to put shoppers back in jeans is heating up. Levi Strauss & Co. and Kontoor Brands Inc. went public this year, and J. Crew Group Inc. may do the same for its denim line Madewell by the end of this year.

Jeansmakers have made headway by making their pants as comfortable as leggings. American Eagle has stayed ahead of the curve by using stretch technology, distressed treatments and a wide range of sizes, including lengths, Chen said. Inside some stores, customers can personalize their jeans by adding back patches or paint.

"Playing it safe"
The retailer wasn’t always at the top of its game. Five years ago, it struggled to keep up with the pace of fast-fashion retailers like H&M and Forever 21. It announced plans in 2014 to close about 150 stores over three years, and both revenue and same-store sales declined for seven straight quarters.

“They were playing it safe to a degree,” said Gabriella Santaniello, founder of retail consulting firm A Line Partners. “But what we’re starting to see from them is that they’re really evolving their product.”

American Eagle is also trying out in-store concepts to keep current fans as they mature. The Manhattan location where Jacobs shopped, which is close to New York University, has a study area and washing machines and dryers under pink neon signs where students can do laundry for free. The catch: They can’t leave during the wash and dry cycles, which means some visitors stay in the store longer.

American Eagle is gaining cachet as a lingerie and swimsuit seller through Aerie, which it launched nationwide in 2006. Aerie has posted quarterly same-store sales growth in the double digits for a handful of years—often 20% or higher—consistently outpacing the American Eagle brand.

"Game changer"
Aerie also helps spread the company’s diversity message. It has aimed to be more inclusive of women of different shapes, sizes and backgrounds, a departure from the images traditionally promoted by rivals including Victoria’s Secret. Executives made the decision some years ago to not retouch photos of models in Aerie campaigns.

Emily Zabaleta, a 25-year-old digital designer, said she and her friends started buying Aerie because of the plus-sized model Iskra Lawrence, often featured in its advertising.

“Aerie is an absolute game changer,” said Zabaleta, who recently placed an online rush order for clothes to take on a cruise. “A lot of the times when I’m looking at these brands it’s ‘oh, how am I able to make myself look like that’ as opposed to ‘oh, I look like that and that could look good on me.’”

This spring, American Eagle began identifying young people -- of different races, gender identities and body sizes -- who are passionate about activism and have sizeable social-media followings. The company asked them to style themselves in American Eagle clothes and take their own photos, some of which now adorn walls of stores across the country.

Young voices
The campaign resonated with customers, about half of whom belong to Gen Z, the group roughly between the ages of 7 and 22. The connection with young shoppers has also influenced the company’s leadership. Last year, when some survivors of the high school shooting in Parkland, Florida, appeared on the cover of Time magazine wearing American Eagle jeans, executives were so moved that they wanted to find a way to support the voices of more teenagers and young adults, Kessler, the brand president, said in an interview.

This spring, the retailer launched its AExME council with a group of young adults. They are paired with mentors and gather about once a month to discuss practices and products going forward. At a meeting at its Pittsburgh headquarters earlier this year, they made suggestions for the back-to-school collection, which the company plans to act on, Kessler said.

“It’s important for kids in this generation to know not all big companies are the same,” he said. “We are turning over a certain amount of control of the brand to this generation.”