Anytime Fitness CMO Stacy Anderson joined a gym for the first time because of a pair of jeans.

A mother of two, Ms. Anderson was so busy working on her career and her family that she found the sight of some of her most beloved clothes depressing. "For me it was, 'Gosh, I am never going to fit into those jeans again,'" she said.

Ms. Anderson's evolution into a gym-goer happened long ago, but her story perfectly encapsulates the strategy behind, "Get to a Healthier Place," a multinational, multimedia campaign for Anytime Fitness, which has nearly two million members and 2,500 franchises spread across 15 countries around the world. Another 1,500 franchises are scheduled to open in the next five years.

The multi-million dollar campaign, which will run into 2015, is the exact opposite of most gym advertisements. Instead of the typical stableful of oiled-up models, "Get to a Healthier Place" is filled with people who look to be in less than peak physical condition: parents who can no longer keep up with their kids, graying boomers trying to master dumbbells, and one guy who looks like he'd be more comfortable carrying a foot-long sub than a medicine ball.

In short, it's creative aimed at folks who know they ought to be exercising more but feel intimidated by the muscle-bound messaging typically used in gym campaigns. Ms. Anderson said she and the company's long-standing agency, GdB, hit upon the idea after research found that typical gym ads were alienating potential customers, rather than inspiring them.

"People were saying things like, 'I don't look good enough to go to a gym,'" Ms. Anderson said. "I was shocked by that.

"I was a little surprised nobody had cracked that insight," she continued. "I do think we're uniquely positioned to take advantage of it."

That's partly because there is so little variety in gym ads. "It's a category filled with a lot of the same imagery," Ms. Anderson said. She realized that if Anytime Fitness zigged while everyone else zagged, the company would have an opportunity to build loyalty, a trait that's elusive among customers in the fitness business.

"The attrition problem in gyms is just insane," Ms. Anderson said. "Half the people that join, they leave by year's end." 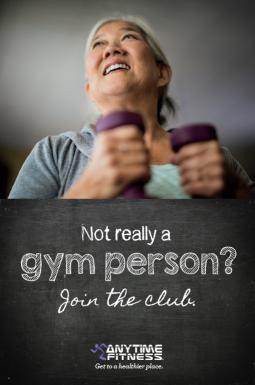 Framing Anytime Fitness as an "anti-Equinox," where members could have an experience that would be intimate and welcoming, seemed promising, especially since the company's previous messaging had focused on convenience.

Prior efforts were also mostly local. "Our prior campaigns didn't really have a coordinated spend effort behind them so they were primarily local tools for local efforts," Ms. Anderson said.

According to Kantar Media, Anytime Fitness spent $1.3 million on ads in 2013, with more than half the spend going to TV. The new campaign, Ms. Anderson said, will be supported by a multi-million dollar spend.

Anytime Fitness franchises are open 24 hours a day, a proposition that was unique when the company first launched in 2002.

"They kind of invented the category," said Doug deGrood, the creative director at GdB who's worked with Anytime Fitness for years.

But it wasn't long before imitators started popping up. And as effective as previous campaigns were, opportunities to bake passion into them were limited. "You can't create irrational loyalty based on convenience," Mr. deGrood said.

Mr. deGrood and Ms. Anderson think "Get to a Healthier Place" represents that opportunity. The idea at the heart of the campaign, that everybody has a moment when they realize they need to start taking better care of themselves, will remain the same in all 15 countries where the company's franchises are located.

"You're talking about something that's so universal," Mr. deGrood said, noting that the messaging will remain the same worldwide, give or take a few colloquial and idiomatic tweaks.

"Everybody has these sort of trigger moments," Mr. deGrood said. "They wake up one day and think, 'Damn, I gotta do something.'"