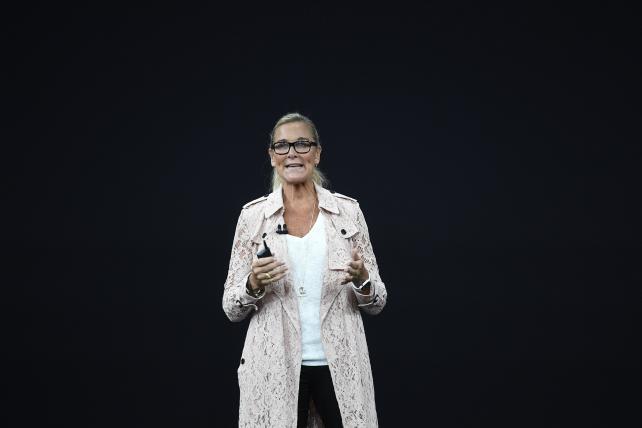 Apple Inc. said Angela Ahrendts, the head of retail operations, is leaving the company in April after serving in the role since 2014.

At Apple, she overhauled the company's retail operations, redesigning stores into meeting places with more open floor plans and a focus on pushing customer service "geniuses" out from behind formal counters.

Under her watch, Apple expanded stores into areas including Mexico, South Korea, Singapore and the United Arab Emirates. She also more closely coordinated Apple's brick-and-mortar stores with its online effort, and renovated dozens of older retail outlets. Apple has more than 500 stores in about 25 countries with tens of thousands of employees.

"Retail is a cornerstone of Apple's success," said Michael Gartenberg, a former senior marketing executive at Apple. "Ahrendts was able to successfully carry the torch on Steve Jobs' vision for Apple in retail. This is not going to be someone easily replaced."

Apple's retail stores are among the most profitable in the world, and under Ahrendts the performance improved. Average sales per square foot rose from $4,640 in 2013 to more than $5,600, according to EMarketer.

"Her focus was integrating the online and offline experience, which in some ways took the focus away from an excellent in-store experience," said Munster, managing partner at Loup Ventures. "The brick-and-mortar store still has friction around the consumer experience, and Apple is committed to making it better."

Ahrendts eschewed discounting and avoided big promotions during important shopping events such as Black Friday. However, in recent months, Apple changed its retail approach when sales of the latest iPhones didn't meet expectations. The company's stores recently placed banners on the front windows promoting the new models, while retail employees have been instructed to push the devices with promotional pricing.

Last week, Ahrendts told Vogue magazine there are "things about the fashion industry that I miss."

She had been floated by some Apple watchers as a potential successor to current Chief Executive Officer Tim Cook. Ahrendts is at least the sixth member of Apple's executive team in a senior vice president position to leave since Cook became CEO in 2011. Others who have departed include chief engineer Bob Mansfield, former retail boss John Browett, General Counsel Bruce Sewell, Chief Financial Officer Peter Oppenheimer and iPhone and iPad software leader Scott Forstall.

Ahrendts has pocketed at least $170 million during her five years at Apple, counting salary, bonuses and value of vested stock awards, according to data compiled by Bloomberg. Her annual cash bonuses have been tied to net sales and operating income, while her stock grants have partially depended on Apple's stock return versus other S&P 500 companies. Cook aside, Apple gives identical pay packages to many of its most senior executives.

O'Brien will become Apple's fourth retail chief since the division was launched by Ron Johnson in the early 2000s. After Johnson left in 2011, the role was taken by Browett, a European retail executive. He departed after less than a year as part of a larger management reorganization by Cook.

O'Brien has worked at Apple for about three decades. Prior to being named vice president of people in 2017, she served as the company's vice president of sales and operations. In that role, she was key in efforts to distribute Apple products around the world. Her combination of experience in managing people and operations made her a fit for the top Apple retail job.

However, this is the first time Apple has gone with an internal candidate and someone without significant retail experience to fill the head of retail position. Browett and Ahrendts were outside hires from the retail industry, while Johnson had worked at Target Corp. before joining Apple.