Just in time for hunting season, Arby's has a new campaign aimed at hunters.

Arby's has been successfully using the "We have the meats" tagline since 2014. Now, the chain known for roast beef and other meat-centric sandwiches is setting its sights on people who hunt. There are more than 20 million hunters in the United States, and that group overlaps heavily with the chain's customer base, said Jeff Baker, VP-brand experience.

"The notion that hunters hunt the meats and we have the meats, we felt like there was a nice creative connection there," Mr. Baker said.

The new campaign is the latest effort by Arby's, which sees itself as a challenger brand with less to spend than larger fast feeders, to aim its marketing at specific groups. For example, Arby's is the official quick-service restaurant partner for E-league, which began its first season this spring. The idea of reaching out to hunters has been in the works for a while. The chain waited until the kickoff of fall hunting season for a bigger impact and said the campaign is set to run through the end of the year.

"We feel like that's a community that's very passionate about what they do," Rob Lynch, brand president and chief marketing officer, told Ad Age in May. "It may not be this huge, broad-reaching activity that everyone in America participates in, but the people that do are passionate about it, and given what our brand stands for, we're all about meat, we feel like there's a connection there."

In one of three new TV commercials, the camera pans across a wooded area, complete with a hoof print shown on the ground, as Ving Rhames says "whether it's winged, antlered or finned, Arby's supports your pursuit of meats." 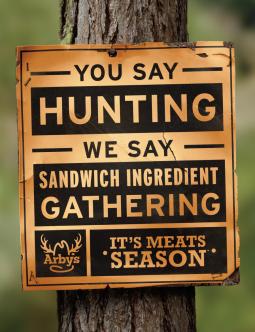 Arby's is also running its first commercials on Outdoor Channel and Sportsman Channel in recent years.

Fallon is Arby's creative agency, with Roar on social, Initiative on media and Edelman on public relations, Mr. Baker said.

The TV spots were shot on location in Georgia. Arby's involved people from the company itself, Fallon and its production team that understood hunting and were hunters to ensure authenticity, Mr. Baker said.

At the end of the TV spots Arby's shows a new version of its Arby's logo, featuring antlers coming out of the hat design. That image will be shown in restaurants in areas where people go hunting.

There may be a few executions for the general audience, Mr. Baker said, but the campaign is largely targeted at the hunting crowd. The spots will air nationally starting Sept. 12. Online plans include teaming up with Field & Stream on digital content.