Under Armour might be setting a new trend with its all-white "Chef Curry" lowtops. Either that or the company is tapping into a new market of middle school lunch ladies and nurses. Because the Steph Curry shoe -- which has been widely mocked on social media and late-night TV -- is apparently selling pretty well.

"In our channel checks and discussions with industry contacts, the Chef shoe has actually sold better than some of its predecessor color [styles], likely due to all the attention paid to it," Canaccord Genuity analyst Camilo Lyon stated in a note to investors today. "A quick scan of Under Armour's site shows that the Chef (white) has the second most sold-out sizes out of a total of six color [styles], which is not too bad given that it has been in market for about a week," added the note, which was titled "Will the Chef cook UA? Hardly."

Matt Powell, a sports industry analyst for NPD Group, stated in an email that "in looking at the UA website, several sizes of the Chef are out of stock which would indicate the shoe is selling well."

The so-called "Chef" Curry Two Low was broadly released a week ago. The backlash was harsh and immediate on social media where the sneakers drew comparisons to hospital shoes, or something dads might wear. "It is a great pair of shoes to own whether you are a Steph Curry fan or just a middle school lunch lady," Jimmy Kimmel cracked on "Jimmy Kimmel Live."

Stephen Colbert joined in on the fun, saying on "The Late Show with Stephen Colbert" that "these shoes are so bland that you should have called them Air Josh Grobans." See his entire rant below, beginning around the 2-minute mark.

An Under Armour spokeswoman said the marketer is not commenting on the shoe. But could it be that the company is actually tapping into new consumer interest in all-white sneaks? The website whowhatwear.com earlier this year ran a post entitled "Why the White Sneaker Trend Isn't Going Anywhere in 2016." It stated that "fashion A-listers like Kendall Jenner, Gigi Hadid, Hailey Baldwin, and more stepped out in the sneakers earlier last year and have been recently spotted in them too." 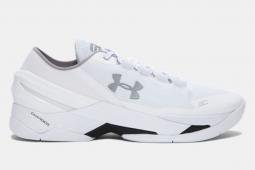 Under Armour's Chef shoe also needs to be put in perspective. The style likely represents just 5% of the dollar volume attributable to the Curry 2 line-up, Canaccord Genuity stated in its note. "Despite the backlash on the Chef Curry shoe, we believe the weight being placed on its importance has been over-exaggerated," the note stated. Indeed, the UA Curry Two Low comes in a variety of colors beyond the white "Chef" version, including black, rocket red and combat green.

At sporting goods retailer Modell's, Mr. Curry's Under Armour products have exploded in popularity in recent months, including the Two-Low shoes. Jason Karlowski, senior manager of sports marketing and brand engagement for the 150-unit, New York-based chain, said the sneakers, as well as other merchandise from the basketball star, have been tough to keep in stock. "With his back-to-back MVP campaigns, many kids out there are gravitating more and more to Curry by the day."

Canaccord Genuity predicted that attention on the Chef shoe will fade as Under Armour on Saturday releases the Curry 2.5 "73&9" shoe that pays tribute to the Golden State Warrior's record-breaking 73-9 regular season.