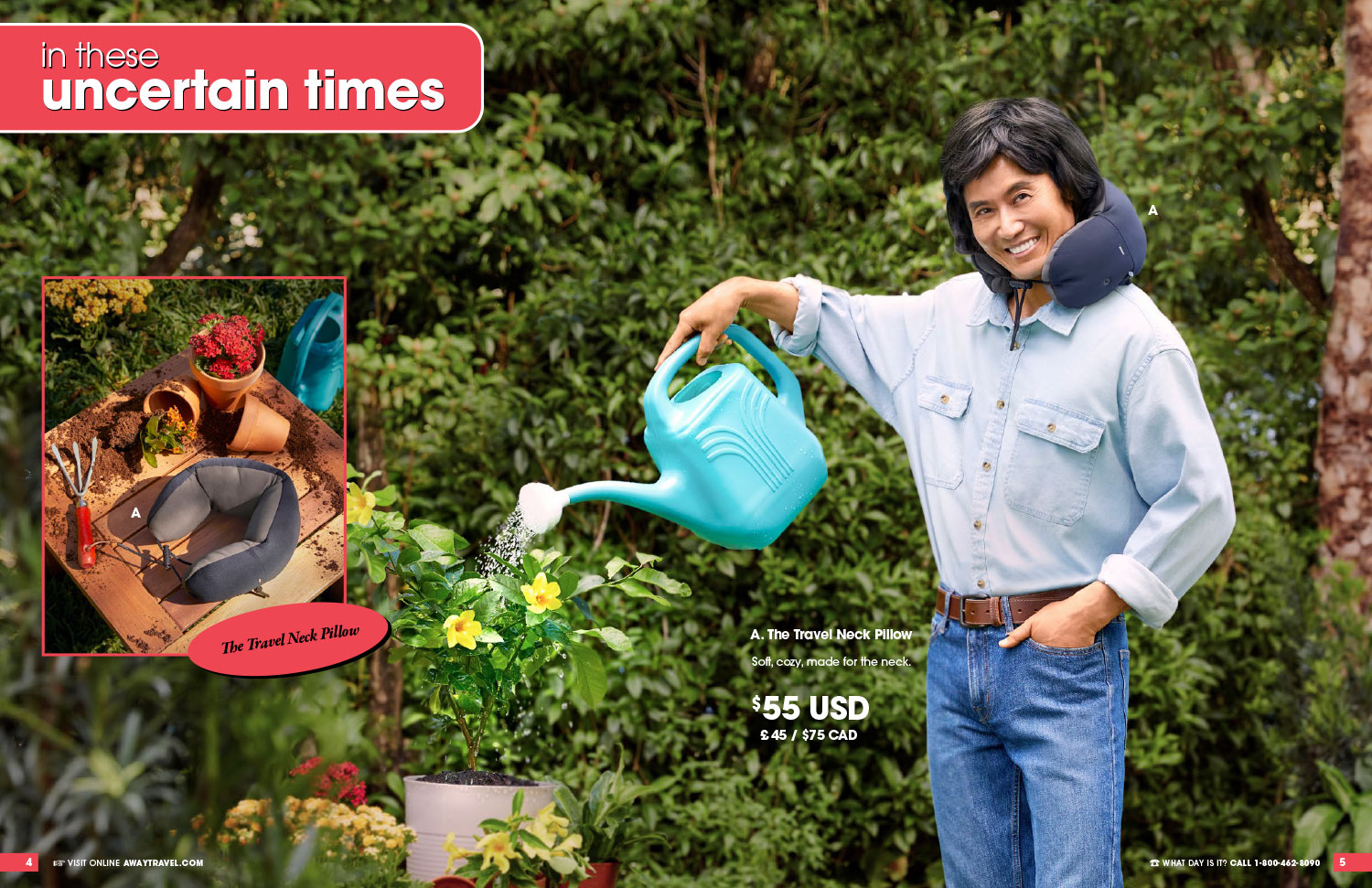 As the vaccine rollout continues and the world prepares to open up, d-to-c lifestyle brand Away today dropped a new suite of travel accessories. It includes products such as a packable neck pillow, sleep mask, travel blanket and compression socks—everything you’d need to help make your airplane flight comfortable. But Away is touting how the goods are also super useful during lockdown in a cheeky “SkyMall”-inspired catalog.

Opening with the cover line “We may not be traveling,” it features people enjoying the goods in their own abodes. 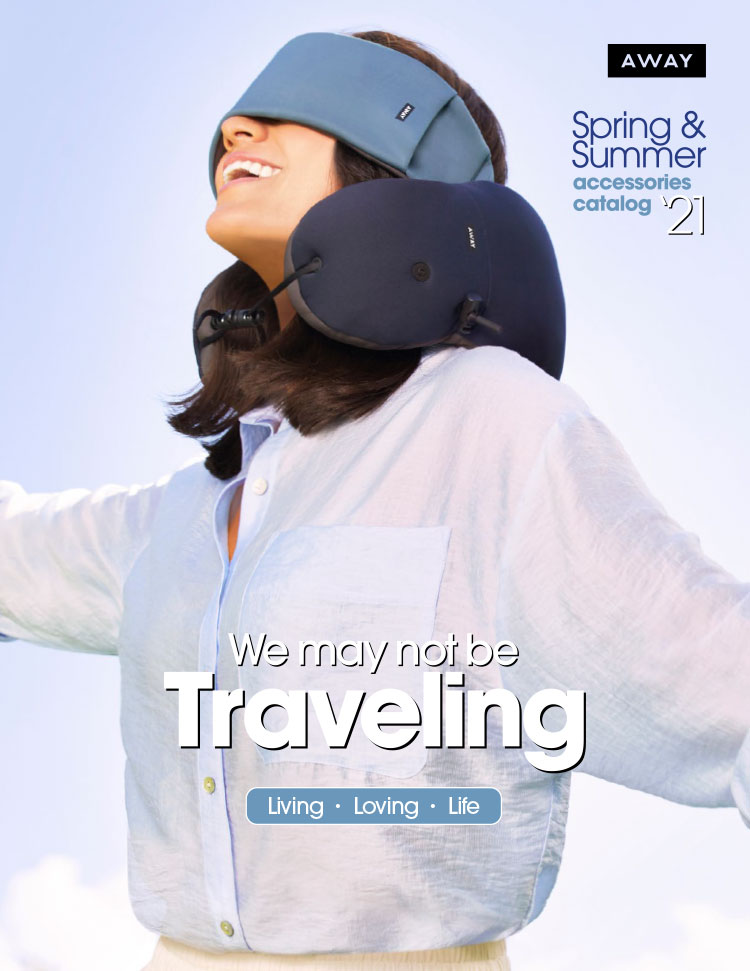 Styled straight out of the '90s and modeled after that mag many of us have flipped through mindlessly while waiting for take-off, it depicts grinning models who wear the neck pillow while watering plants and throwing pottery. The travel blanket keeps a pair cozy as they barbecue, while others enjoy the sleep mask as they chat on landlines. Together, they capture the moments to be enjoyed "in these uncertain times," reads one spread. 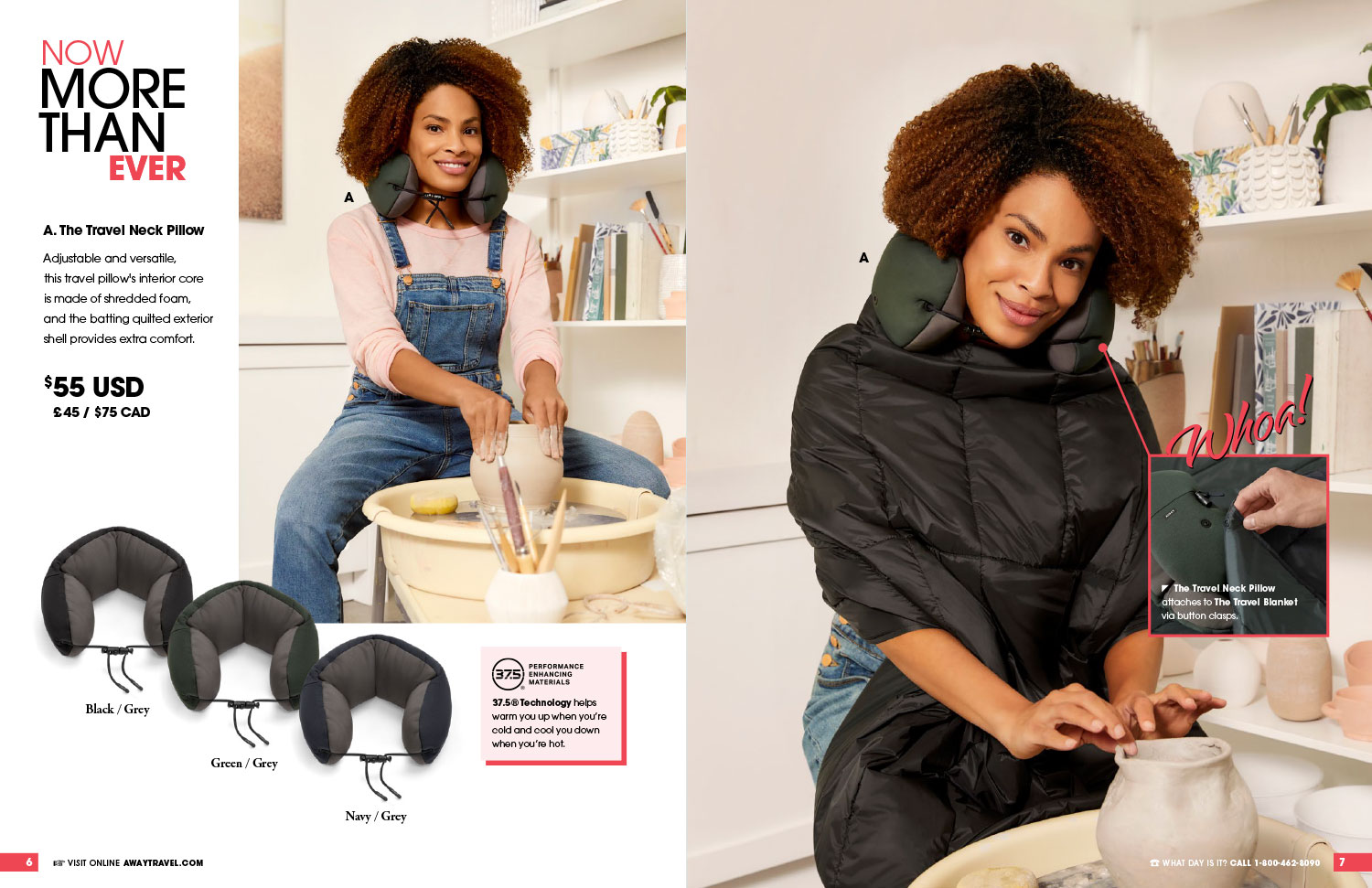 The pages also feature funny testimonials, including one for the travel blanket from Sarah J. of Austin, Texas: “I’m glad I have a blanket.” 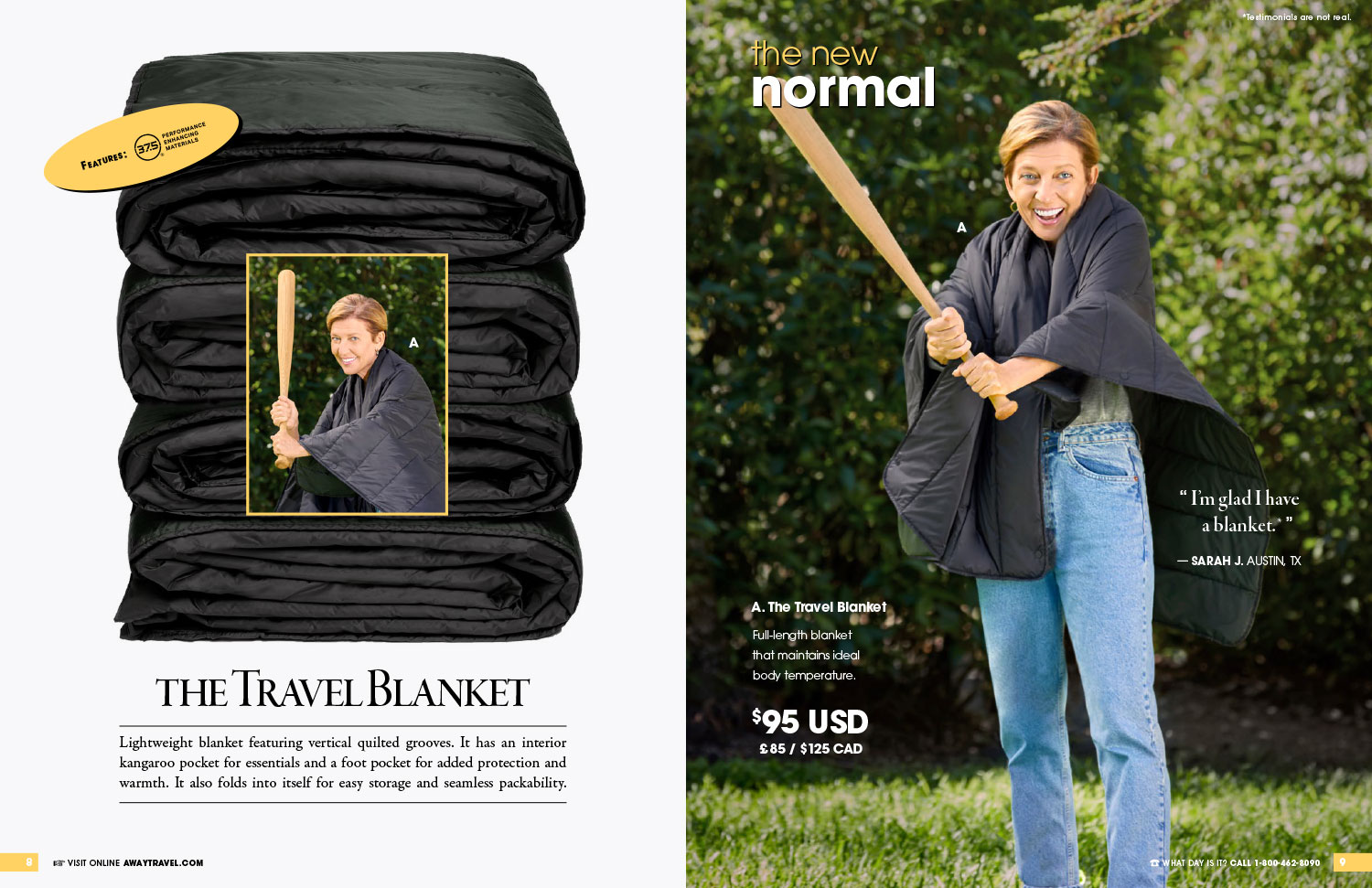 Within the catalog are also Easter Eggs, such as an ad for the photographer who shot its images (Joe Montezinos at joe-foto.com). There’s also a scannable Spotify code for a playlist that includes tracks like Bright Eyes’ “Landlocked Blues,” The White Stripes’ “Little Room” and Mike McGear’s “Do Nothing All Day.” Shoppers who happen to be wondering “What day is it?” can call a hotline (1-800-462-8090) printed on each spread. (Spoiler alert—it won’t tell you.) 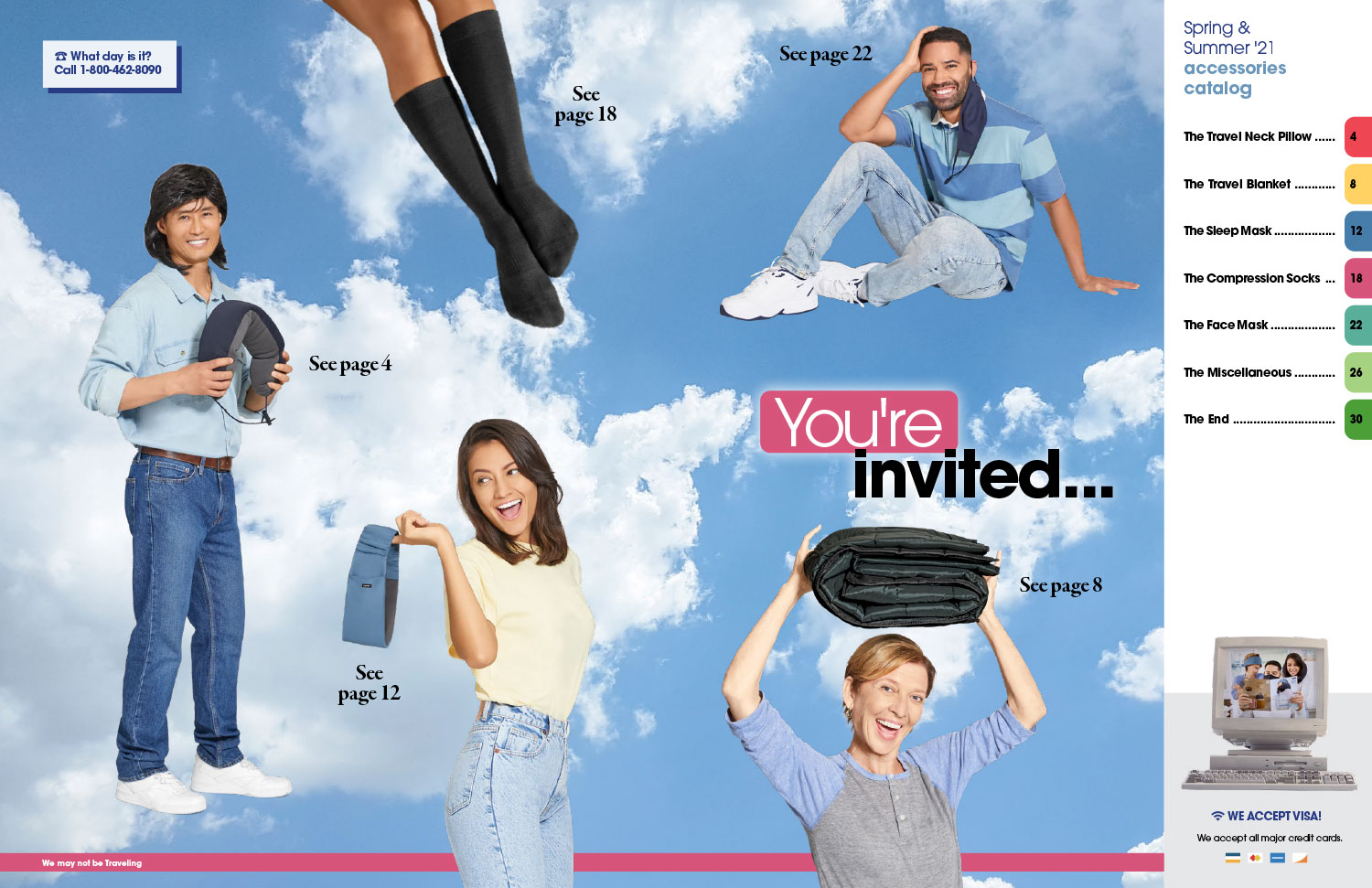 According to Away CMO Selena Kalvaria, even though the world hasn’t fully opened up yet, now was the right time to introduce the new line. “For us, it felt like the perfect moment for these accessories—you can either use them at home or get back onto the road,” she says.

Like others in the travel industry, Away endured major bumps over the past year. “Our revenue was down as much as 90 percent, and we were scrambling to figure out what was going on with the new world order,” Kalvaria says.

But by Memorial Day 2020, the company started to see traction rebuild alongside a rise in Airbnb bookings and changes in Google search trends.

Away, a digitally native brand, then adjusted its conversations with consumers by positioning its suitcases and weekenders for those taking short trips and more local getaways. The company even introduced a pet carrier, which quickly sold out, coinciding with the uptick in pet adoptions last year.

The catalog is the brand’s latest effort to build its one-on-one relationship with its community, even though travel hasn’t fully regained its footing. “We know the eagerness and stir-craziness has reached fever pitch, but we’re not quite ready for everybody to be able to travel safely,” she says.

That idea paved the way for the "SkyMall" spoof, which was created in-house by Away’s in-house team, led by Executive Creative Director Tim Roan, who previously worked at Lyft and Wieden+Kennedy. 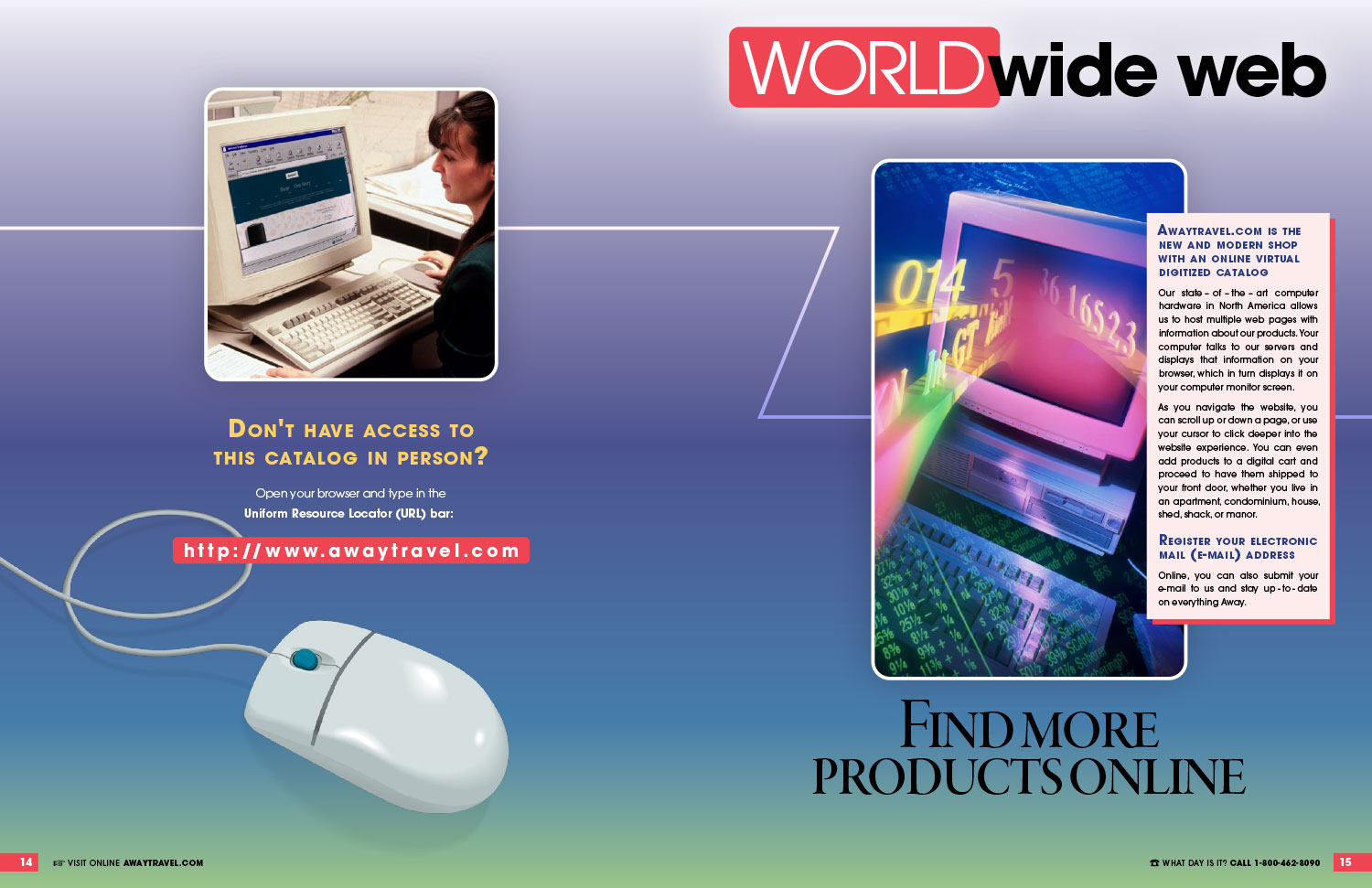 Don’t expect to find Away’s catalog in the seat pocket in front of you. Away will be sending it by mail to a few hundred of its most loyal customers. Others can view it online—the URL is highlighted in an ad within the catalog targeted to web newbies, instructing them on how to input an address and navigate once they get there. The new goods will also be promoted via TikTok partnerships and digital assets. Postcards inspired by the catalog will also be distributed at the company’s retail outlets. 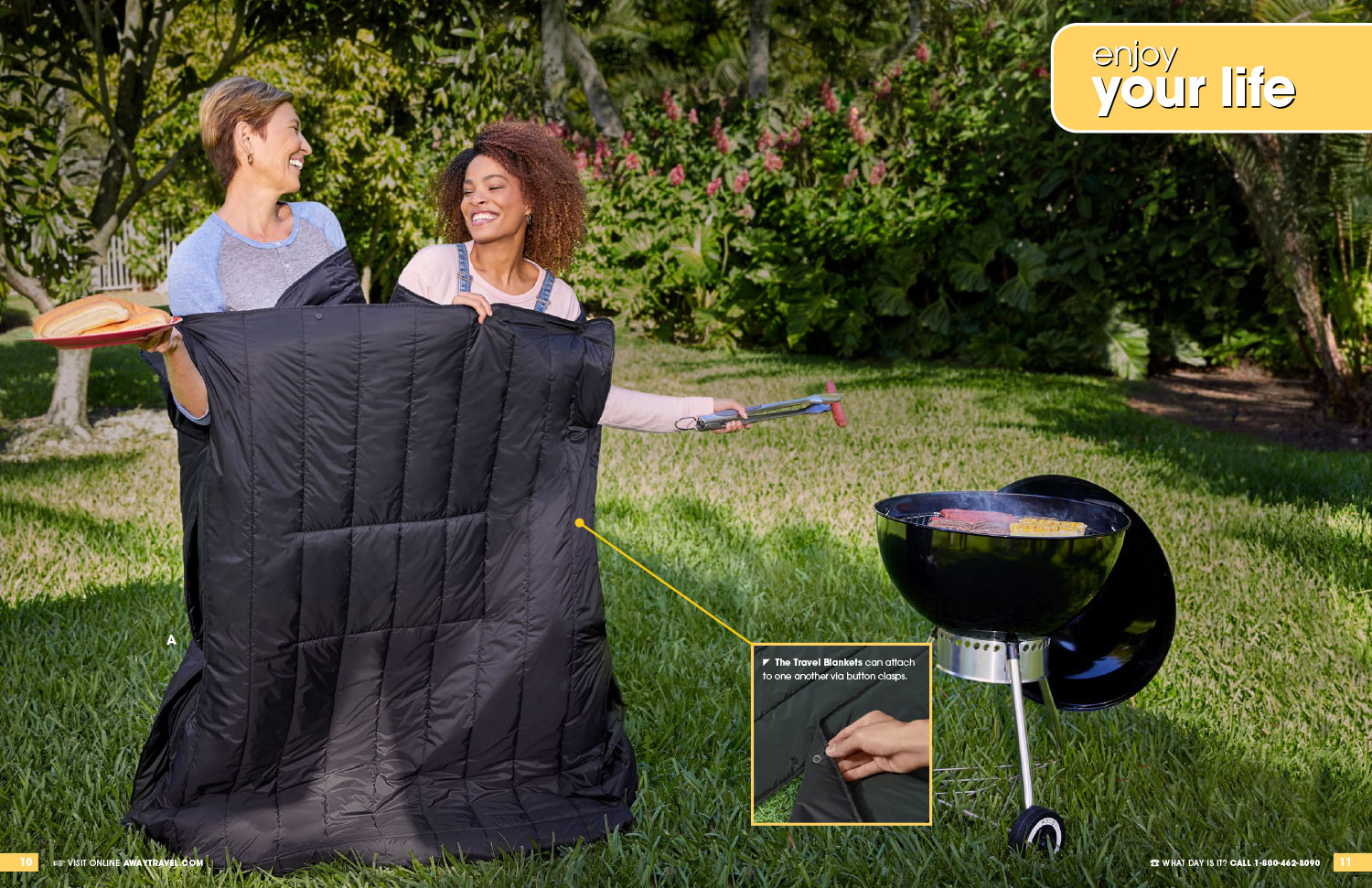 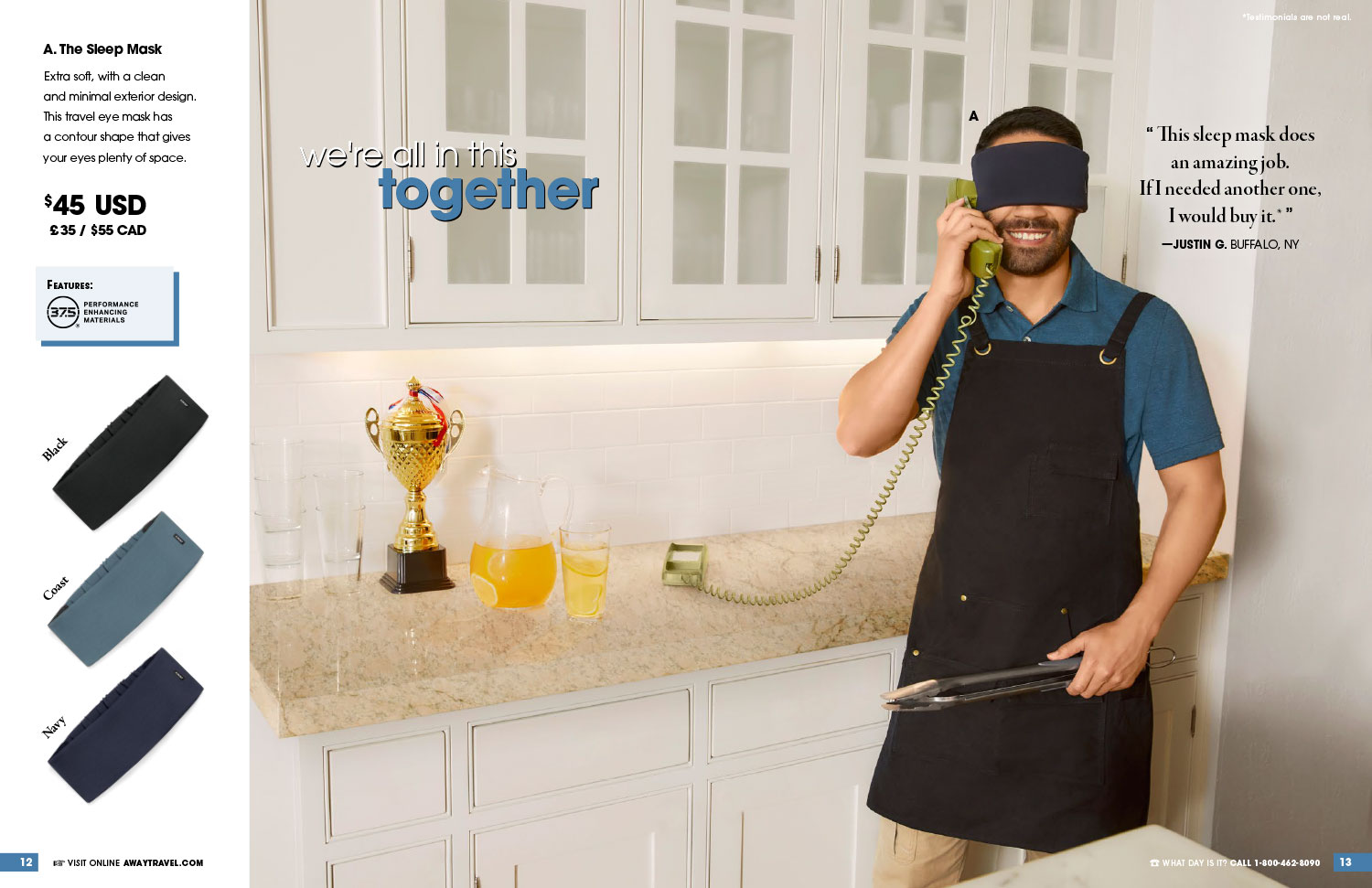 To learn more about the latest in innovative retail moves, attend Ad Age Next: Retail on April 20, a digital conference featuring executives from brands including Petco, eBay and Rent the Runway. Buy your tickets here.