Behind the high-stakes vaccine marketing effort

Experts say that with so many health groups advertising, there is potential to muddle the message
READ THIS NEXT
Free Budweisers for the vaccinated, and ‘Vax Tee’ from Miller Lite: Trending 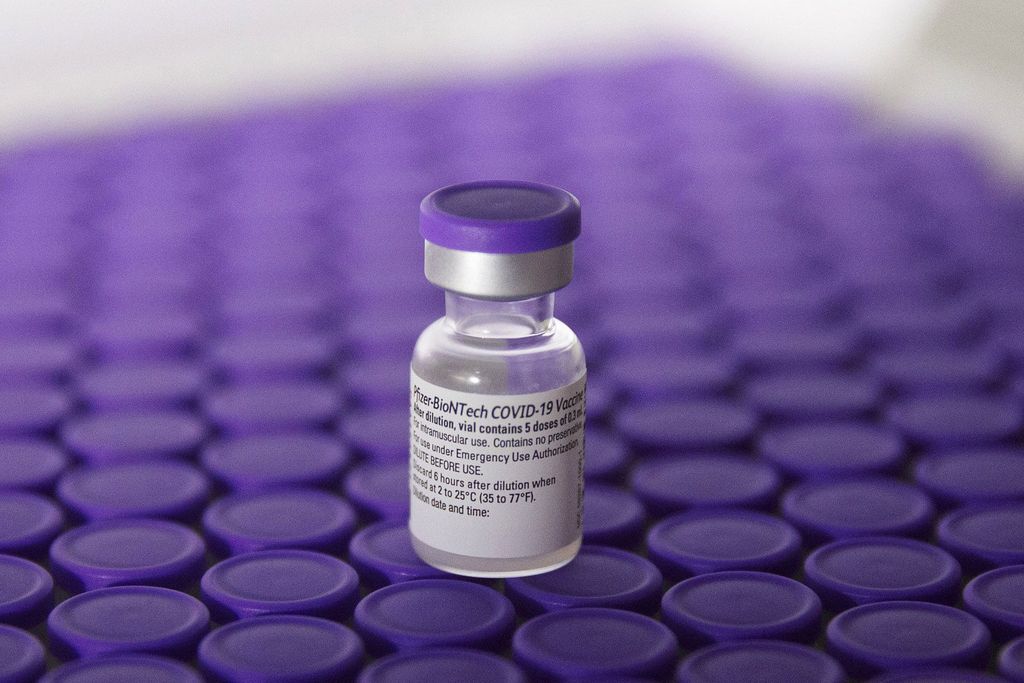 A vial of the the Pfizer-BioNTech Covid-19 vaccine

That’s the view of Dr. Alex Jahangir, an orthopedic surgeon and a director at Vanderbilt University Medical Center, which was instrumental in developing Moderna’s much-publicized coronavirus vaccine and AstraZeneca’s emergent therapy. With the vaccines now being rolled out comes the immense challenge of educating the public and persuading Americans that, despite all the misinformation and skepticism out there, the vaccines are safe and effective.

That’s where Dolly comes in. “Imagine Dolly Parton getting the Moderna vaccine on social media,” Jahangir says of the country music star and philanthropist whose $1 million donation helped fund research that paved the way for the drug maker’s breakthrough. “It can’t be just Big Pharma or big government that gets the word out.”

When it comes to COVID-19 vaccines, it’s all hands on deck to try and sway the segments of the population who remain skeptical of getting an inoculation. While 60% of those polled by Pew Research Center in November said they would likely get vaccinated, that still leaves 40% of Americans to be won over.

Getting widespread buy-in for the vaccination drive will take an expansive — and expensive — marketing effort by a broad range of players, from drug makers, healthcare companies and ad agencies to social media platforms, data scientists and the U.S. government. So far, the Department of Health and Human Services has committed $250 million to educating the public, including a PSA featuring Dr. Anthony Fauci, the director of the National Institute of Allergy and Infectious Diseases and other officials, that broke last month with a $150,000 buy on YouTube. Moderna launched its first-ever consumer-facing campaign last month, while earlier in the year Pfizer rolled out its first mass-market campaign with a 60-second video ad featuring the tagline “Science will win.”

Just last week, another  $50 million campaign launched via the privately funded COVID Collaborative spearheaded by The Ad Council. The Collaborative encompasses dozens of companies, associations and institutions, including Walmart, the Corporation for Public Broadcasting and the U.S. Chamber of Commerce.

“Our goal is to ensure the American public has the most accurate information possible to feel educated on the vaccines and ultimately feel confident about getting vaccinated,” says Lisa Sherman, president and CEO of the Ad Council, which aims to play as important a role in disseminating information about coronavirus vaccines as it did in the 1950s to promote the polio vaccine. She called the pandemic and vaccination efforts “the biggest issue of our lifetime and it requires an effort like never before in terms of size, scale, speed and urgency.”

But there is also a concern that the messages may not be cohesive and could work against each other. “The risk is when there are too many disparate and different stories,” says Andrea Palmer, president of Publicis Health Media in Chicago. “If there are too many storylines, there’s too much opportunity for the public to distrust and mistrust and to seek out their own truth and formulate different versions of the truth – and that’s where it gets risky.” It is vital that “the messenger and the message are aligned.”

“It’s not different information for different audiences – we have to make sure we’re promoting the core information,” says Stuart Dill, senior VP, office of engagement, at Vanderbilt University Medical Center. “There’s a lot of white noise out there,” he points out. “You can have all the channels in the world, but if you don’t have a good story it doesn’t matter.”

One piece of the story that is especially critical is that while the vaccines are 95% effective, for COVID-19 to be brought fully under control depends on at least 70% of the population getting inoculated. That will require marketers to work diligently to separate dubious claims about the vaccines from the hard facts.

“The COVID-19 outbreak and response has been accompanied by a massive info-demic – an overabundance of information, some accurate and some not, that makes it hard for people to find trustworthy sources and reliable guidance when they need it,” says Tarik Jasarevic, a spokesman for the World Health Organization. In addition to its own apps and social media accounts, WHO has partnered with the biggest tech platforms — from Google to Tencent to WhatsApp — to bring reliable information about the virus and vaccines to more than 2.2 billion people in over 75 languages.

To date, the ads the drug makers have put out into the market are not so much about reassuring the public but, rather, about playing up their roles in producing the vaccines. The companies are not competing against one another in the traditional sense—distribution is being coordinated, with government oversight—so these campaigns are not about marketing one company’s vaccines over another. Instead, the creative has focused on their scientific breakthroughs, and their people.

The first of Pfizer’s ads, which broke in April, intones over somber visuals like empty supermarket shelves and masked consumers: “When things are most uncertain, we turn to the most certain thing there is: science.” It goes on to show scientists at work, singling out the company’s “experts, research and resources.” Again, no competitive messaging here; Pfizer is quick to mention that other companies and institutions are joining it in a singular mission.

And just this week the Wall Street Journal reported that Pfizer was remaking its logo in "an effort to highlight the company’s shift from a diversified health care giant to one more focused on creating prescription drugs and vaccines that prevent and cure disease."

Moderna’s first consumer-facing campaign, meanwhile, launched last month with a full-page ad in the Sunday New York Times and a digital takeover of the Nasdaq MarketSite in New York’s Times Square. The print ad features just a few words, with copy that reads: “We’ve been at this for 10 years. Our mRNA platform is a modern approach to medicine. But it’s just the beginning.” The company’s logo follows in the ad, created by Omnicom’s TBWA\Chiat\Day Los Angeles with media handled by sibling Hearts & Sciences.

The drug makers themselves are being tight-lipped about their campaigns, as, for the most part, are the agencies they work with. In many cases, agencies won’t even confirm they have a pharmaceutical company as a client, citing confidentiality agreements.

Another important player when it comes to not only disseminating the vaccines but also marketing their availability and safety will be the national drugstore chains.

Deerfield, Illinois-based Walgreens, which operates more than 9,000 outlets in the U.S., said in a statement: “As marketers, the challenge is to stay on top of the latest information given the rapidly evolving nature of vaccine development and distribution and ensure that we are constantly updating and changing our content to reflect the most accurate and latest information from the CDC.” The company said it will communicate with the public via videos and other materials in multiple languages, as well as collaborate with community leaders and organizations. “We are producing content daily, and even hourly sometimes, to ensure our customers have the latest information at their fingertips.”

Data is also playing an enormous role in finely targeting prospects. New York-based DeepIntent is working with drug makers including AstraZeneca and Merck and agencies like Hearts & Science and Publicis Health Media, who are using its demand-side platform to plan, activate, measure and optimize large-scale COVID vaccine campaigns.

“Healthcare marketers have the most important job in the world, and that is convincing people they need to get vaccinated,” says Chris Paquette, cofounder and CEO of DeepIntent and a former data scientist at Memorial Sloan Kettering Cancer Center in New York.

As with any other marketing campaign, marketers behind the vaccination push must figure out how to reach the right consumers on the right media channels at the right time. “We can look at demographics across 4,000 different attributes – gender, household income – and piece together what messaging is resonating best, find more folks that look like that, then drive the best effect,” Paquette says.

DeepIntent marries ad-serving data with real-world clinical data to evaluate the contribution of each piece of creative toward driving vaccinations for each demo. For example, if a campaign is running two messages (say, one on vaccine efficacy and the other on vaccine safety), the firm can determine that men aged 35-44 who have seen the vaccine efficacy message are 15% more likely to be vaccinated than those who have seen only the vaccine safety ad, then use machine learning to automate the selection of the optimal creative for each demo based on those insights within their DSP.

That could be particularly useful for reaching demographic segments of the population that remain less trusting of the vaccines. Pew’s research found that only 42% of the Black population signaled their willingness to be inoculated. Another study this past fall from the NAACP, Unidos US and the COVID Collaborative found that just 14% of Black respondents and 34% of the Latinx population had faith in the vaccines.

“Trust is at the root of hesitancy, and many people don’t yet have confidence in the COVID-19 vaccines,” says The Ad Council’s Sherman. “This is especially true for communities of color, who have been disproportionately impacted by COVID-19 and have greater hesitancy, due to historical and ongoing health inequities.” For its part, The Ad Council is doing extensive social listening to monitor and identify misinformation so it can optimize content and activate “trusted messengers,” it says, to address that misinformation in real time. “We also know that a one-size-fits-all message is not the solution to a challenge as complex as mass vaccine adoption,” she adds.

Along with Dolly Parton perhaps, hard data of the sort DeepIntent deals in will be a linchpin toward winning over the public. “It will take time, but by reinforcing positive messages about the vaccines, and acknowledging the experiences of individuals who’ve had the vaccines, we will see a tidal shift,” says Paquette. “People are evidence-driven — they like to see the proof in the pudding.”