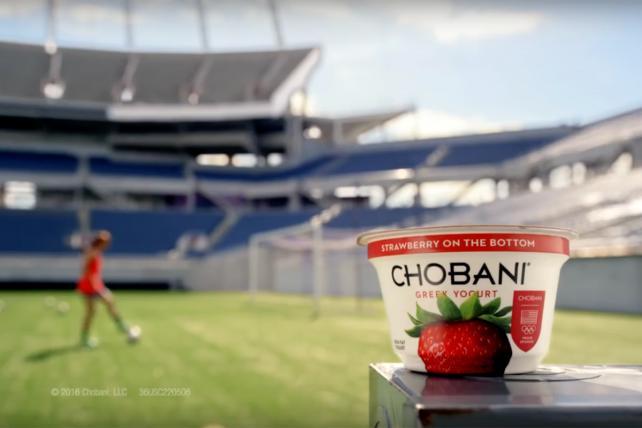 Yoplait is suffering through a Greek crisis.

Chobani, which popularized Greek yogurt in America, overtook General Mills Inc.'s Yoplait last year to become the country's biggest yogurt brand. That a 12-year-old upstart could overtake a powerhouse in so short a time illustrates how shifting consumer trends are catching the established food giants flat-footed. They've become, their critics say, too complacent about perennial product lines and too plodding to react with innovative, moneymaking products of their own.

Across the food landscape, established industry giants are losing sales to upstarts and contemporary trends. Longtime soup leaders Campbell and Progresso, made by General Mills, have both lost market share since 2011. Smartfood, the cheese-flavored popcorn made by PepsiCo Inc.'s Frito-Lay unit, is feeling the challenge from SkinnyPop, produced with just three ingredients. General Mills' Nature Valley has experienced sluggish growth, and sales of Kellogg Co.'s Special K snack bars are down 39% since 2011. In the meantime, relative newcomer Kind Bars has carved out 10% of the market in just five years.

Big Food has "tried to capture these trends," said Jared Koerten, an analyst at Euromonitor International. "But they're late to the game.

Yoplait accounted for 25% of the U.S. yogurt market as recently as 2011, the year that Minneapolis-based General Mills bought a stake. And as recently as 2015, it was the country's leading brand. (Only Dannon, the U.S. arm of Danone, sells more, with its wider variety of brands.) But sales plunged 11% to $1.75 billion last year, leaving it with a market share of 19%. General Mills, with revenue of about $45 billion, said slumping yogurt sales forced the company to lower its profit forecast. Executives acknowledged that rivals had better products on the market, and said they'd raised prices too much amid steep competition in the industry.

Competition isn't letting up. Newcomers such as Noosa are gaining traction. Sales of the Australian-style yogurt brand jumped almost 36% to $163 million last year, according to data from Euromonitor.

Chobani mushroomed into a $1 billion affront to industry leaders within five years of hitting the market. There were plenty of growing pains, but the company has smoothed out production problems at a giant plant in Idaho and is now the top-selling brand in the U.S. at nearly $2 billion. Closely held Chobani had its most profitable year in 2016, and competitors have taken notice. General Mills, in addition to pushing harder into organic yogurt, plans to roll out a new product called Yoplait Dippers this year that's similar to Chobani's popular Flip line.

When it comes to rivals, Chobani Chief Marketing Officer Peter McGuinness said he's not worried about imitation. "It hasn't hurt our business because our food is better."

One of the most persistent knocks on Yoplait, and other conventional yogurts, is that it contains too much sugar. Chobani and Noosa are plenty sweet, but customers are willing to indulge some flaws if they feel the brand is authentic. At the same time, a general distrust of Big Food has weighed down brands like Yoplait. General Mills has added its own Greek yogurt products, but executives recently cited weakness in its "Greek lines" as a main reason for its 18% decline in yogurt sales in the current fiscal year, which lasts until the end of May.

This is a big part of the problem for the food giants: They can develop and distribute products similar to popular offerings from hipper competitors, but the brands don't necessarily resonate with customers.

Then there's the food companies' relentless drive to improve profit margins. Amid the industry's sales decline, General Mills, Mondelez International Inc., Kellogg and Campbell have aggressively cut costs. The pressure has increased since 2015, when Warren Buffett and the private equity firm 3G Capital orchestrated the merger of Kraft Foods and H.J. Heinz. With the acquisitive 3G in control at Kraft Heinz Co., the specter of another blockbuster deal has competitors slashing costs to avoid being the next target. But the execution can be tricky.

General Mills recently said that, as it seeks to boost margins, it had "taken too much price" on yogurt -- industry jargon for raising prices and investing insufficiently in promotions. That came as competitors, buoyed by lower dairy prices, were aggressive in their bids to drive sales.

"It's not that easy," said Greg Kuczynski, an analyst at Janus Capital. "If you're chewing up all the savings with years of sales declines, it's clearly not sustainable."