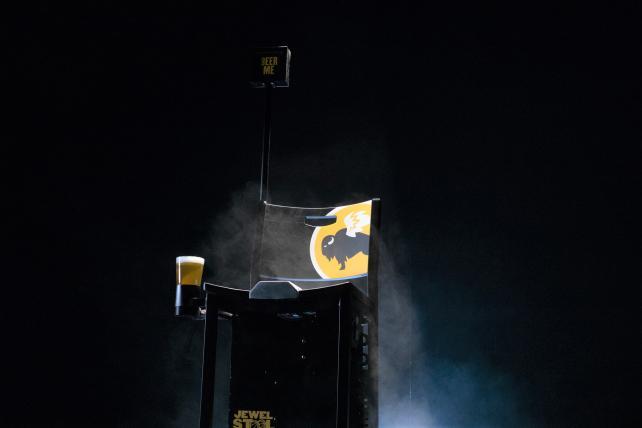 Buffalo Wild Wings is taking some fresh approaches to the men's NCAA basketball tournament this year, including an ad that will only air if games head into overtime, and on-site stools specifically designed for guys who just got vasectomies.

We'll get to the Jewel Stools, which are likely to generate plenty of buzz, even though they're only in two locations.

First, though, there's a broader strategy at play in the wings and beer chain's first creative campaign developed by the Martin Agency. Buffalo Wild Wings hired the Martin Agency on creative and Group M's Mindshare on media in 2018.

Each of the March Madness spots ends with a new "Buffalo Wild Wings, roar!" tagline.

The "That's March Madness" spot is meant to convince people that even though there are options to view the games seemingly anywhere, folks should do as their "fancestors" did and head, of course, to Buffalo Wild Wings.

"You've been trained that you can watch sports anywhere," but "true fans know" that watching on a phone, in an office cubicle or relegated to the basement "is not a great place to watch it," says Seth Freeman, who is leading his first March Madness campaign at Buffalo Wild Wings since joining as its chief marketing officer in August.

The "Overtime" spot, as its name suggests, is about games going into overtime. It shows people watching at home using the minutes before OT dealing with everyday tasks while those in the restaurants are clearly having more fun. It will only air during the first commercial break if a March Madness game goes into overtime.

It's a new spin on overtime from B Dubs, which for years has joked it has an "overtime button" to extend games. It even offered free wings to America if the 2018 and 2019 Super Bowls went into overtime (they didn't).

The final spot, "Buffer," mimics the annoyance of online buffering impeding watching live sports. "That annoying buffer is not going to get in the way" at the chain's restaurants, says Freeman, who says that spot will online run online, particularly on sites with a sports focus.

And then there's the Jewel Stool, meant for guys who schedule their vasectomies so their recovery days coincide with the tournament. (Some urologists even promote the specific timing of the procedure with phrases such as "Vas Madness.")

"We are having some fun with it," says Freeman.

The special stools feature a cooling material in the center of the seat so guys who are recovering from the procedure can relax. Cupholders keep their beer cool, too, and there's a button that lets guys order more beer without the pain of standing up. There are going to be two Jewel Stools at a restaurant in New York (253 W 47th St.) and two at a location in Los Angeles (3150 Wilshire Blvd.).

Buffalo Wild Wings is in its seventh year as an NCAA partner, serving as both the official hangout for NCAA March Madness and carrying the title of official chicken wings of the NCAA.

Media spending on the campaign is an undisclosed "good investment," about the same as during last year's March Madness season, says Freeman. "It's an important time for the business and we want to make sure that this campaign is driving commercial results for us."