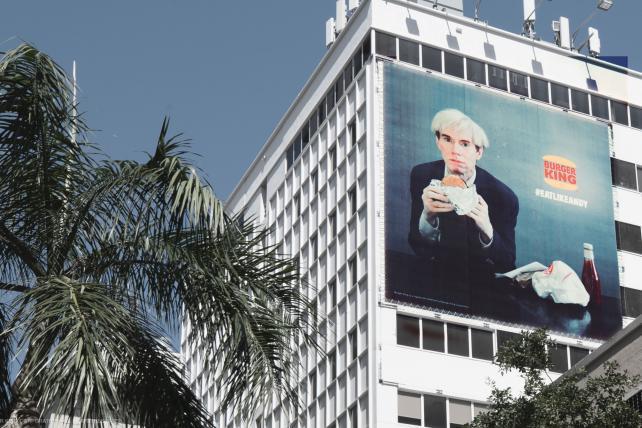 Burger King took a huge gamble at this year's Super Bowl: It ran 45 seconds of vintage footage of Andy Warhol eating a Whopper during a game in which 30 seconds of ad time was going for more than $5 million.

"It's so radically different, I'm shitting my pants," Burger King Global Chief Marketing Officer Fernando Machado said before the ad ran, referring to the risk he was taking.

By a lot of measures, the CMO might need to change his slacks again.

Ace Metrix's quantitative scores for restaurant Super Bowl ads going back to 2010 show that "Eat Like Andy" was the weakest performer on every metric it tracks, trailing spots from McDonald's, Taco Bell, Wendy's and Subway. Among all of this year's Super Bowl ads, Ace Metrix says it came in second in two categories: "Eerie" and "WTF."

And the commercial was the lowest-scoring ad in the USA Today Ad Meter, in 58th place.

"We're very proud of that," says Machado. "Ad Meter was never our objective."

The CMO says he also doesn't care much about the results of a panel of 65 MBA students at Kellogg School of Management at Northwestern University, which gave "Eat Like Andy" the only "F" of the night.

"I'm not concerned about any ranking," says Machado.

Instead, he says, the brand was looking for an uptick in perception, which he believes it achieved: "We don't care much because we know the results we've got. We have never seen such a strong shift in brand attributes like what we've seen with this campaign."

Early social media buzz showed about a quarter of people had negative reactions to the ad, but Machado says Burger King expected it to spark confusion and that confusion usually leads to negativity. But once people began looking into it, he says, with people sharing #EatLikeAndy images and videos, checking out the full-length 1982 film and so on, sentiment shifted in a more positive direction.

"The whole campaign was designed to create conversation," Machado says.

"It's not a spot that offends you or challenges your belief system," says Machado. "No one will stop eating at Burger King because we aired a spot with Andy Warhol eating a burger."

Searches for Andy Warhol spiked the night of the game, according to Google Trends data. People wondered whether it was really Warhol, why Warhol ate the burger, even if Warhol was still alive. Some wondered if it was an ad for Heinz ketchup. Others thought the food looked unappetizing and said the amount of ketchup used was a sign of poor quality, Ace Metrix says. (But the idea wasn't lost on everyone. Viewer Akos Papp, for instance, is selling framed prints from the spot for $7,292—most proceeds go to nonprofits—based on the supposed cost of airtime broken down to each individual frame.)

Burger King hoped to see an improvement in brand attributes, especially among younger people. And according to research conducted for the chain, it succeeded. YouGov data, based on a sample of about 1,200 people representative of the general U.S. population, show positive buzz increased by 9.3 percent, and was up 19.7 percent among the coveted 18-to-34-year-old demographic. Looking at those who watched the spot versus those who didn't, positive buzz soared by 35.7 percent, and by 51.6 percent among that 18-to-34 cohort. Purchase consideration among viewers rose 8.3 percent, but was flat for the 18-to-34-year-old group.

Burger King also earned coveted media impressions, which it says are at 4 billion and counting.

But even if sales rise this quarter, it isn't necessarily because people were lured by the TV spot or billboards in New York and Miami. There's a steady stream of offers, such as 10 chicken nuggets for $1, a $6 King Box meal and a pair of sandwiches for $6, running at Burger King, which is also busy promoting its mobile app and delivery service and often issues coupons.

Regardless, Machado says, Burger King's return to the Super Bowl for the first time since 2006 was meant to be a brand-building event, not a short-term sales driver.

"We are proud to have pushed the boundaries the way that we did," he says. "In my past five years here we never saw anything even close to that in terms of shifting perception of the brand."