Butterfinger updates tagline with an alien touting a better bar 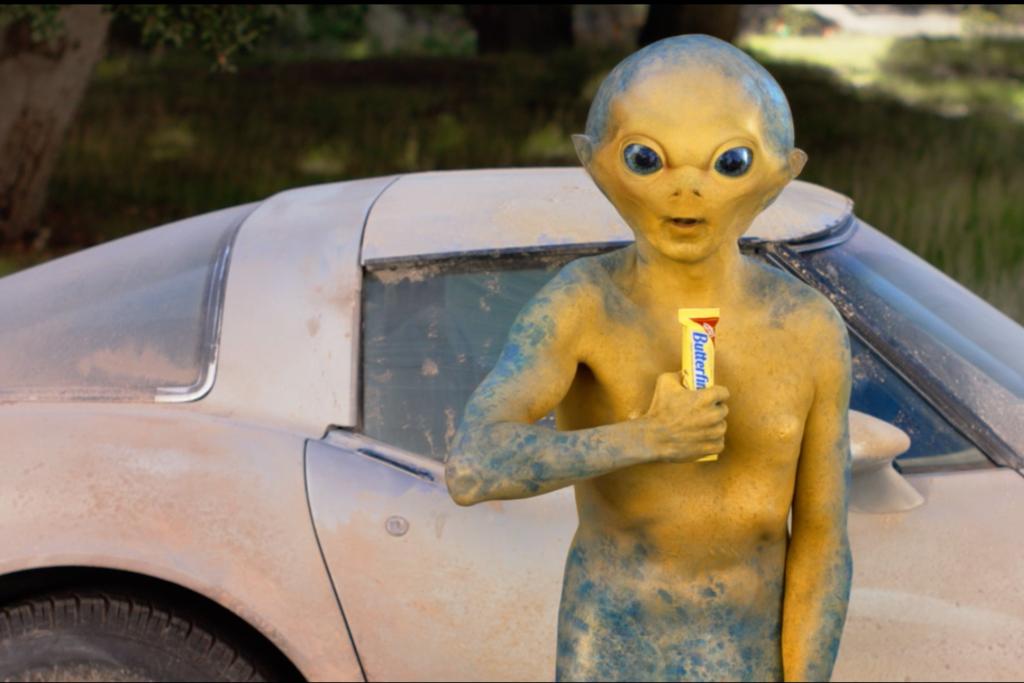 Butterfinger is bringing back its "Nobody better lay a finger on my Butterfinger" tagline—last used in a big way in 2012—with a couple of twists, including having an alien deliver what is now a slightly different tagline.

After somehow hearing about an updated Butterfinger, the alien escapes a lab, takes a terrorizing joyride in a dust-covered Corvette, finds the candy bar and uses her/his powers to grab it before declaring, "Nobody lays a finger on my better Butterfinger."

Ferrero Group, home to such products as Tic Tac and Nutella, bought Nestlé's U.S. confectionery business in 2018. It overhauled Butterfinger, removing an artificial preservative and hydrogenated oil, and switching to an all-U.S. grown jumbo peanut and a higher-quality chocolatey coating, plus wrapping the bar in a double layer packaging, says Kristen Mandel, senior director of marketing at Ferrara Candy Co., the Ferrero Group business that includes Butterfinger, Baby Ruth and other former Nestlé chocolate brands.

The alien, coated in the brand's yellow and blue hues, serves to both tout the changes and keep the tone a bit out there, as Butterfinger has in past campaigns. The "Better Butterfinger" line is a subtle switch from the variations of "Nobody better lay a finger on my Butterfinger" used over the years and delivered by Bart Simpson and others.

The new bars began shipping in December and are now reaching full distribution.

The team on the "Better Butterfinger" campaign includes those who used to work at Nestlé and people from the new owner, says Mandel, herself a Nestlé veteran. Spending was not disclosed, but Mandel said she hasn't seen the organization invest as much as it is now in all of her years working on the brand (and that work included the Super Bowl).