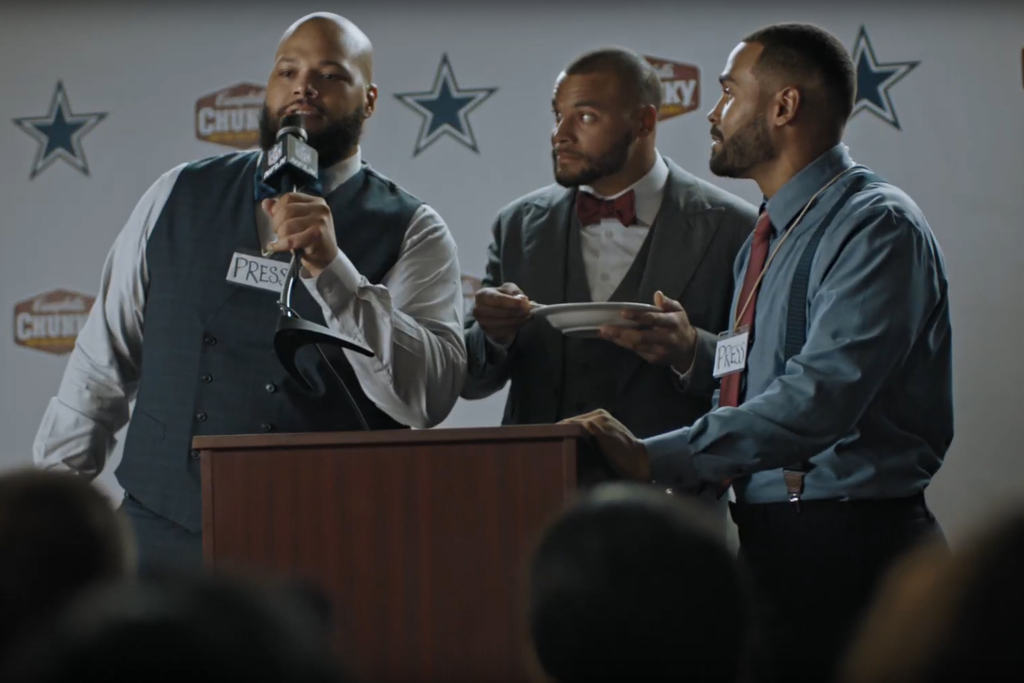 The “Champions of Chunky” campaign debuts Thursday, the same day as the NFL season opener. It’s a bit of an updated take on the long-running Chunky’s "Mama’s Boy" campaign that now includes other family members.

Chunky has been an NFL sponsor since 1997. Some of its best-known tie-ins were years of Mama's Boy commercials including players and sometimes their real moms. That campaign debuted in 1997 and last appeared in 2014, when Richard Sherman and his mother, Beverly, appeared in ads.

For this season's take, Chunky is banking on the likeability of two stars, Dallas Cowboys quarterback Prescott and New York Giants running back Barkley.

In the first new spot, “Question for Dak,” Prescott’s brothers Tad and Jace pose as reporters at a post-game briefing, complete with hand-written press badges, to pepper him with questions.

Barkley is joined by his mother, Tonya Johnson, in one of two other spots set to be released later in the season. (Prescott’s mother died in 2013.)

Campbell Soup Co. is focusing a chunk of its marketing spending on soup, where it is busy fighting off competitors including stores' private-label products, particularly in broth. When it comes to ready-to-eat Chunky, though, recent promotional pricing may have been too aggressive, Campbell Soup CEO Mark Clouse said on an Aug. 30 conference call. He sees Chunky as a brand that can stand on its quality versus other ready-to-eat soups. "And so, when we’re dealing it so deep on price, I just don’t think that’s the right platform," Clouse said.

Campbell Soup's U.S. soup sales rose 3 percent in the company’s recent fiscal fourth quarter, after a bleak 14 percent decline a year earlier. Campbell’s ready-to-serve and condensed soups did well in the latest quarter while its broth sales declined. Still, that was in the quarter that ended in late July, soup’s smallest quarter of the year.

Publicis Groupe’s Leo Burnett Chicago is the creative agency on the campaign. In 2018, Campbell Soup selected Publicis for much of its creative and media work.

As part of the campaign, Campbell Soup is doing its first partnership with streaming platform Twitch. Campbell says Prescott, Barkley and other NFL players will surprise people such as firefighters, teachers and coaches, throughout the football season. Local market activations include NFL player meet-and-greet events and having a food truck visit supermarkets and stadiums on game days with Chunky soup samples.