None of the 18 CMOs hired at the 100 most-advertised brands and companies were minorities in 2018, according to a new study from Spencer Stuart.
READ THIS NEXT
Procter & Gamble adds Major League Soccer sponsorship to its NFL and Olympics deals 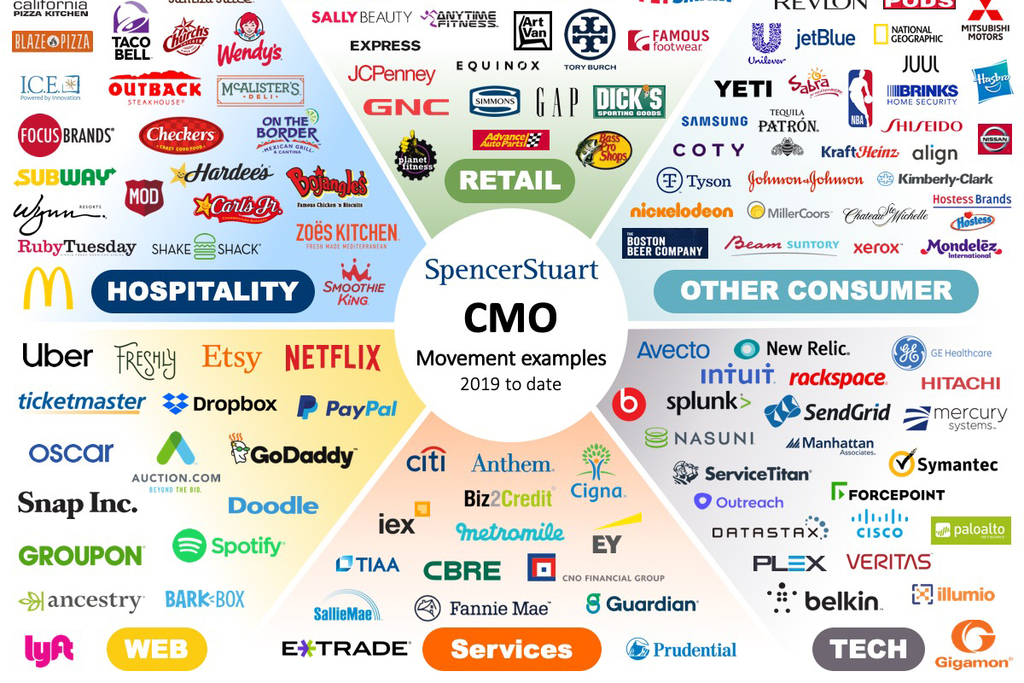 Turnover in the chief marketing officer role has stabilized and more women are being hired, but the industry remains plagued by a lack of minority representation in the job, according to a new report.

Average CMO tenure among 100 of the most-advertised U.S. brands dipped slightly to 43 months in 2018, compared with 44 months the year prior, according to the latest “CMO Tenure Study” from executive recruitment firm Spencer Stuart. The average tenure has ranged from 42 to 48 months since 2010, which is an improvement over the turnover experienced from 2004 to 2009, which dipped as low as 24 months of average tenure in 2004, according to the report.

However, CMO turnover remains a concern across the broader marketing industry. To illustrate the point, the firm published a graphic depicting all brands and companies experiencing CMO changes that includes some that are outside of the top 100 advertisers. (See it above.) The turnover is evident at retail giant Walmart, which is searching for its fourth CMO in four years, after the company announced Monday that Barbara Messing is stepping down as of Aug. 30.

The report points to several factors driving the industry CMO turnover, including a “failure to properly assess the incoming CMO’s skills and experiences, ensuring that they are properly aligned with the future needs of the organization.” Other issues include poor alignment between the CEO and CMO and “inflated expectations for ‘unicorn’ CMOs who can immediately blend ‘magic’ (creative) and ‘logic’ (performance data) to drive growth, and bring others along on the transformation of the overall marketing efforts,” the report states.

“There are encouraging signs in this year’s tenure study, particularly the increase in the number of women in this year’s freshman class, but considerably more needs to be done to bring more minority representation into the CMO ranks,” says Greg Welch, a consultant in Spencer Stuart’s Marketing Officer Practice.