His Mission Is to Put Health-Care Facility on Same Map as Mayo, Johns Hopkins
READ THIS NEXT
See how Ford announced its new $7 billion electric vehicle plants

BATAVIA, Ohio (AdAge.com) -- For a Midwest institution out to build a bigger national name, the news couldn't have gotten much better for the Cleveland Clinic Foundation than in the past year. 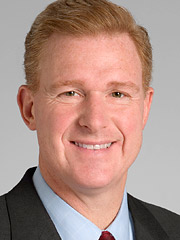 It got a ringing endorsement from President Barack Obama last July, and a three-year contract to handle health care nationwide for employees of home-improvement retailer Lowe's in February. That was before a team of its researchers announced last month they had developed a vaccine that prevents the formation of breast cancer tumors in mice, offering hope, at best a decade away, of a similar vaccine for humans.

Then there was a November story in Newsweek describing Cleveland Clinic as "The Hospital That Could Cure Health Care," and the nation's first face transplant was performed at the clinic in May 2009.

For Paul Matsen, 50, CMO of the Cleveland Clinic for the past four years, it's certainly better news than he had to work with at his last stop. He left his job as CMO of Delta Air Lines in 2006 amid the carrier's bankruptcy and downsizing before coming to Cleveland Clinic.

"It's different," he said with a bit of understatement. "It's a fun and rewarding environment. And when you can see something like the potential for a cancer vaccine or the discovery of the XMRV virus [linked both to leukemia and chronic fatigue syndrome and discovered by researchers at the clinic] or the face transplant, you can't help but get excited about that."

Despite what he termed "the ups and downs," he said, "I enjoyed working in the [airline] industry. ... But it is a difficult business. I try to remember that now when I'm a traveler, and I try to be very patient."

Mr. Matsen, 50, had some big accomplishments at Delta, where he worked for 12 years, first as VP-consumer marketing just as the airline was developing its global business.

At Delta, he later headed corporate strategy and planning, international partnerships and then, as CMO, all marketing. He helped to rename and redesign the Delta Skymiles loyalty program, establish the groundbreaking Skymiles credit-card partnership with American Express and form the Skyteam Alliance with such carriers as Air France.

These days, however, he's a "caregiver," although he's not working directly on breast cancer vaccines, face transplants or heart surgeries. But, he said, "Even in marketing and communications, we view ourselves as part of the team that performs care for patients."

The team Mr. Matsen heads, which includes PR, has patient education as a major part of its mission. That includes launching a health information section on its website, ClevelandClinic.org/health, and supporting other initiatives by CEO Tony Cosgrove, to whom Mr. Matsen reports, which include advocating wellness through community fitness partnerships, publicizing outcomes from all its treatment areas and focusing on patient experience in part through a growing presence on Facebook and Twitter.

Cleveland Clinic still has work to do as a brand, though. Among major national medical centers, it ranks behind Minnesota's Mayo Clinic and Maryland's Johns Hopkins Medical Center in awareness, Mr. Matsen said. "The population here in Northeastern Ohio has suffered loss and decline over the past several years," he said, "so one of our big challenges is to bring volume from around the country and around the world."

Health reform may help. "It's going to bring a lot of new patients into the system," he said. "I think it's going to require health-care systems to come up with new ways of treating and helping to manage chronic disease in particular," with the Lowe's coronary-care arrangement a model he hopes others will follow.

After naming Adworks, Washington, its agency of record, including digital and media work, following a review last year, Cleveland Clinic spends half its media dollars on digital to reach consumers searching for health information.

The online campaign highlights some of the surprising things Cleveland Clinic is working on, including an implantable artificial kidney the size of a pop can. The message expands through vehicles, such as a recent 16-page supplement in The New York Times Magazine or an annual report hosted at its website and Facebook in the form of an interactive PDF with embedded video.

While the good publicity comes from having big stories to tell, Mr. Matsen said, the clinic's in-house PR team also creates a video-news feature each weekday for news operations that have been cutting budgets for health and science reporting. "We have lots of great stories to tell," he said. "The opportunity for our team is to find innovative ways to tell it."

And Mr. Matsen always has those stories on the tip of his own tongue, having navigated Cleveland Clinic's complexity to find the interesting nuggets, said Katherine Pastre, director-client services for Adworks. "He's so naturally curious, he seems to always know the latest thing that's going on," she said. "Five minutes with Paul is like getting five hours with someone else."