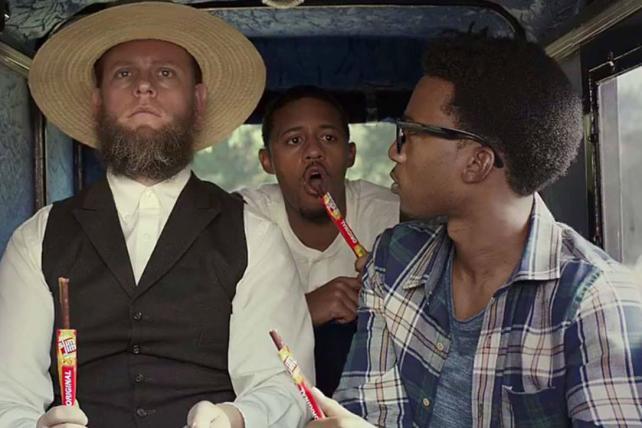 Slim Jim is trying humor-filled approaches in a TV and online marketing push that comes as parent company ConAgra Foods doubles down on its well-known brand names.

The new effort comes after other protein-focused snacks, from fancy jerky to pre-portioned packs of meat, cheese and nuts, have heated up competition in the protein snack category. Slim Jim's new creative push began in mid-September with a TV commercial featuring a somewhat snarky Amish buggy driver. This week, it is beefing up the effort with the introduction of a new spot as well as a series of sketches on Funny or Die.

The target audience for Slim Jim, millennial men, is a step away from the typical female shopper who picks up other ConAgra products such as Hunt's canned tomatoes to cook meals for her family. So the team took a different approach in consumer research. Rather than fielding questions in a conference room, it went to a bar in Chicago.

"We took them to a scene that they were more comfortable with, so that we got more authentic, natural-feeling responses," said Heather Dumford, director of ConAgra's media team.

Slim Jim is among the largest brands in terms of marketing spending at ConAgra, which is getting out of the private label business to focus on its branded products under Sean Connolly, who joined as CEO in April. Mr. Connolly knows exactly how the protein snacking category is shaking up. He most recently led Hillshire Brands Co., which bought the premium Golden Island jerky brand, came up with higher-end snack-sized packages of salami and other items, and was sold to Tyson Foods for its brand-making prowess in 2014.

Still, the Slim Jim guy isn't looking for something fancy. He's looking for something convenient and portable. Ms. Dumford said Slim Jim's core consumers are interested in "being entertained" and so it came up with some "snackable content," rather than information about the product, which is how packaged foods are sometimes promoted.

While the Funny or Die content is launching at the same time as the commercials, the themes are different.

The Funny or Die sketches feature comedian T.J. Miller as Greg the Genie, who grants wishes guys make while snacking on Slim Jim. In one, a guy stuck paying his taxes wishes he could be watching football. The genie grants his wish -- by taking him to watch a flag football game being played by a bunch of accountants.

The first TV spot in the series, "Buggy," features two guys stuck on the side of the road after their car breaks down. Soon, they're rescued by an Amish buggy driver. "What's it like living without the Internet?" one of the guys asks the Amish man once they're all in the buggy eating Slim Jims. "It's alright. I just get photos of your mom through the mail," the Amish driver deadpans.

The brand's fans are taking notice. As one person commented on the brand's Facebook page: "Best Slim Jim commercial since the ones with Macho Man Randy Savage," referring to spots that starred the pro wrestler, who died in 2011.

DDB California worked on the TV spots while Spark and Trisect worked on the longer content with Funny or Die. The TV campaign is set to run through May, the end of ConAgra's fiscal year, on networks such as ESPN, FXX and Comedy Central.

ConAgra declined to discuss specific spending plans for the campaign, but Ms. Dumford said the company "certainly increased support on the brand this year." She said Slim Jim is among ConAgra's top five brands in terms of marketing support. Mr. Connolly said during a conference call this month that ConAgra would keep increasing marketing spending after being "underinvested" in the past.

Sales of Slim Jim products rose 13.2% to $560.6 million in the 52 weeks ended on Sept. 6, according to U.S. data from Chicago-based market research firm IRI. The bulk of those sales come from the brand's traditional meat sticks, though sales of its Slim Jim jerky line are growing at an even faster clip.

Slim Jim is sticking with its "Snap into a Slim Jim" slogan, one that was resurrected before this campaign began. Even when ConAgra switched to the line "made from stuff guys need," it was "snap into a Slim Jim" that consumers recalled. "This is some well earned equity in the brand," Mr. Brennan said.