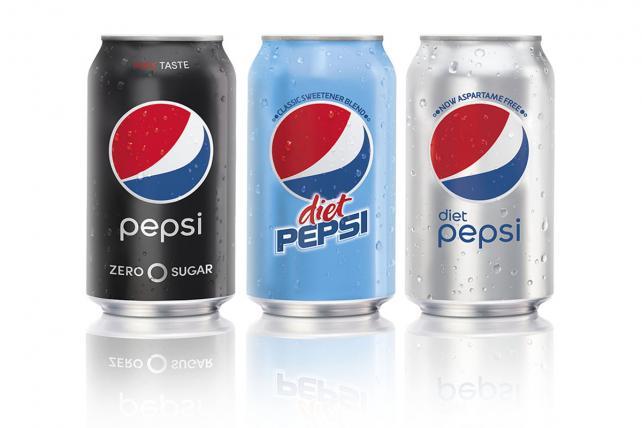 PepsiCo is bringing back the aspartame version of Diet Pepsi after taking the sweetener out of the soda less than a year ago. But the resurrected original version will be sold in limited quantities and the aspartame-free variety will remain the marketer's flagship diet cola.

The changes, which were reported first today by Beverage Digest, are part of a broader overhaul of PepsiCo's sugar-free lineup, which has dealing with sales headwinds. The aspartame version will be marketed as the "Classic Sweetener Blend" and be sold in light blue "retro" packaging, according to PepsiCo, which confirmed the changes to Ad Age. The silver look of the aspartame-free version is not changing. The cola brand is also changing the name of Pepsi Max to Pepsi Zero Sugar to "make it clear that the brand is a diet offering," Beverage Digest reported.

PepsiCo yanked aspartame from Diet Pepsi late last year amid consumer health concerns about the much-maligned sweetener. But the move backfired, according to sales results, as some Diet Pepsi loyalists clamored for the old formula. For the first quarter, volume fell 10.6%, compared with a 5.7% decline for Diet Coke, according to Beverage Digest. Most diet sodas have suffered in recent years.

The move to bring back the old version is somewhat reminiscent of Coca-Cola's 1985 move to bring back its classic version after New Coke flopped. But Beverage Digest noted that Diet Pepsi's classic formula resurrection is different on a couple of fronts: The aspartame version will remain the flagship, and "unlike red can Coca-Cola, which was and is the top-selling cola in the U.S., Diet Pepsi is the No. 7 cola by volume and the No. 2 diet cola."

Aspartame has been a subject of debate in recent years as some consumers and health activists blamed the sweetener for contributing to various health issues. But the evidence is mixed. The American Cancer Society's position is that "for most people, no health problems have clearly been linked to aspartame use." PepsiCo walked a tightrope, defending aspartame as safe, but saying it removed it in response to consumer demand.

For the reformulated version, Pepsi replaced aspartame with a combination of sucralose and acesulfame potassium, known as Ace-K. The resurrected classic blend includes aspartame and Ace-K and will be sold nationally in 12-packs, 2-liter bottles and 20-ounce bottles, according to PepsiCo.

The formula for the newly named Pepsi Zero Sugar will be the same as the Pepsi Max formula. It includes aspartame, Ace-K and ginseng. The new name positions the version as a more direct competitor to Coke Zero, which recently began calling out the phrase "Zero Sugar" on packaging. Pepsi Max sales fell 12.3% in the first quarter, according to Beverage Digest.