DSC's new Blueprint brand, launching officially today, is one of a few ways the 7-year-old business is shaking things up in its third year since being acquired by packaged-goods giant Unilever and amid signs growth has slowed.

This week Dollar Shave Club will also begin testing vending machines at malls and transit hubs in New York, Los Angeles, San Francisco and Minneapolis. And DSC is fundamentally changing how it brings new customers into the fold, moving beyond its core of men getting monthly boxes of razor blades in favor of less frequent shipments of its broad range of shave prep, haircare, skincare and oral-care products. Overall, DSC now has more than three dozen products in six categories.

"We've moved from razors once a month to everything you need to look, smell and feel your best a couple times a year," says DSC founder and CEO Michael Dubin. New customers are now pitched on DSC's Full Service offering, which includes an initial $15 starter box with products for shaving, haircare and oral care, followed by a "restock box" a month later for $48.88 and an open-ended offer to buy more later. Dubin hopes to have all new customers start with the Full Service package by year end.

The moves come as competition is heating up and growth has slowed. Procter & Gamble Co. Chief Financial Officer Jon Moeller said on his company's October earnings call that its data show Gillette's was the only razor subscription business that grew members in the U.S. last quarter. Speaking at the Association of National Advertisers Masters of Marketing conference last month, investment banker Terence Kawaja pointed to numbers showing DSC sales growth flattening just before Unilever bought it in 2016.

Unilever Chief Financial Officer Graeme Pitkethly said on his quarterly sales call last month DSC now has 3.9 million members, up from the 3 million cited when Unilever bought the company for a reported $1 billion in 2016. Pitkethly acknowledged subscriber growth "has started to come in at a slightly lower rate," though the overall business is up 10 percent year to date, including expansion into the U.K.

Blueprint, being marketed primarily to existing members for now, is another part of the growth plan. DSC's research shows 62 percent of members wear cologne daily, with 86 percent of the cologne wearers using different scents for different occasions. So Blueprint launches with six fragrances, three each in ranges named Fresh and Warm.

Gottlieb is the nose behind all this. The 50-year industry veteran, described as having "done more to shape the modern world's olfactive landscape than perhaps any other individual" by the Fragrance Foundation when she was inducted into its Hall of Fame earlier this year, has developed everything from Calvin Klein's Obsession and Eternity to Unilever's Axe line.

She's also developed most fragrances for DSC products up to now, Dubin says.

But Blueprint was a unique challenge. "No one has successfully sold fragrance online, and this is as good an opportunity to do that as you'll find," Gottlieb says. "The fragrances almost invite you to try them."

To close the sale online, DSC will try wordsmithing. "Armani Code – nobody knows what that smells like," says Nick Virginio, DSC senior brand development manager. "With ours you see Intense Vanilla, Black Suede, Citrusy Bergamot." The six products also are numbered in ascending order of complexity and sophistication. As an alternative to magazine scent strips and retail testers, DSC also is trying trial purchase boxes with small amounts of all six scents.

Still, DSC is trying to compete in a fragrance business where retail exposure historically has been required. And rival online razor player Harry's had made inroads moving into Target and Walmart.

So DSC, while sticking with its direct-to-consumer roots, is trying a different path to brick and mortar. Its automated machines that will start popping up this week in such places as LaGuardia Airport in New York, Mall of America in Minneapolis, Transbay Transit Center in San Francisco and Roosevelt Field mall in Long Island. The machines will offer six pre-bundled kits of various DSC products for $12, and members who have the DSC app will get notifications on their phones when they're nearby. 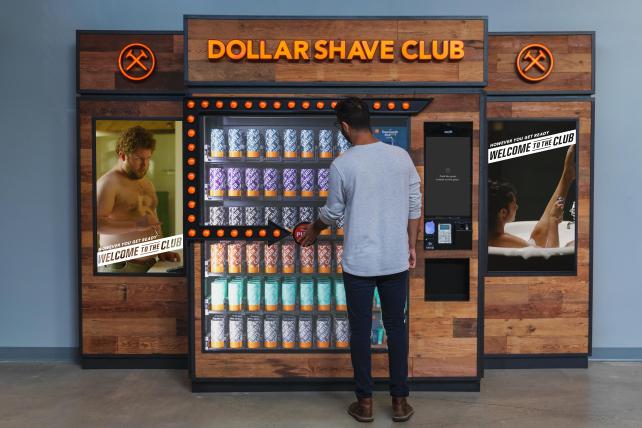 "While we're not going into mass retail, we are going to be increasing our presence in the real world," Dubin says. "What's unique about these machines is that they're all travel and trial size products that allow people to try the products first and build affinity for them.