Clothier blames COVID-19 losses
READ THIS NEXT
Free Budweisers for the vaccinated, and ‘Vax Tee’ from Miller Lite: Trending 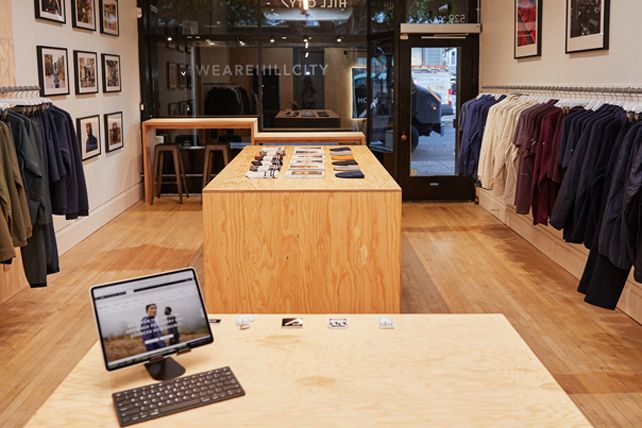 The decision to close Hill City came on the heels of Gap Inc.’s disappointing results.

Less than two years after debuting Hill City, a menswear brand designed to compete with sportswear giants like Nike and Under Armour, Gap is closing the label. Hill City announced the news on its Instagram channel late Thursday.

“We poured our heart and soul into building Hill City from the ground up, and in our own way,” the post read. “Now, three years later, our team of 20, each of us at home, sit with the unfortunate news that our parent company has made the difficult decision to shut down Hill City.”

Hill City’s e-commerce page, which is connected to other Gap Inc. brands Old Navy, Athleta and Banana Republic, featured a similar note. The online-only Hill City will restock and add the new styles the brand has been working on as it winds down operations; it will also accept customer returns.

A Gap Inc. spokeswoman noted in a statement that the financial impact of COVID-19 has “required the company to ruthlessly prioritize and reduce operating expenses” even though the Hill City business was “performing well.”

The announcement came on the heels of Gap Inc.’s disappointing earnings on Thursday afternoon. For the quarter ended May 2, the company reported a 43 percent sales decline to $2.1 billion and a net loss of $932 million. Temporary closures of Gap’s nearly 4,000 locations began in mid-March, and stores have slowly begun to reopen in recent weeks. Online sales rose 13 percent, though digital sales at the Gap brand fell 5 percent for the quarter, a decline that was not missed by analysts. Neil Saunders, managing director of GlobalData Retail, noted in a research note that Gap’s online losses come at a time when rivals were nearly doubling online revenues during the lockdowns caused by the coronavirus.

“Before the pandemic hit, Gap was in a weak position,” Saunders wrote. “It emerges even more withered with quite a lot of holes in its strategy.” He added that “Gap now needs to reinvent and refocus its efforts with an urgency that is unparalleled in its history.”

That reinvention now includes the dissolution of Hill City, which was meant to attract male customers and generate the same amount of sales success that the company’s well-performing Athleta womenswear brand has enjoyed. In fact, Hill City merchandise was available to touch and feel in select Athleta brick-and-mortar locations, though the brand was online-only. By focusing on female empowerment, Athleta has grown its customer base to include younger consumers with its Athleta Girl line and also distinguished itself from more male-centric brands like Nike, for example. Hill City debuted amid a heavy roster of sportswear giants that were already in steep competition.

Although our journey has been cut short, it’s already been worth it. Thank you all for everything. 🖤 #WEAREHILLCITYFOREVER - (Swipe to read our full statement)