Honda taps H.E.R. for the return of its Civic Tour concert series, but must overcome livestream fatigue | Ad Age
Skip to main content
Sign In Register

H.E.R. will perform at the April 28 event hosted on Live Nation's Twitch channel as the automaker seeks to build buzz for the 2022 Civic
READ THIS NEXT
The D’Amelio sisters hook up with Hollister and IHOP responds to Adam Sandler: Trending 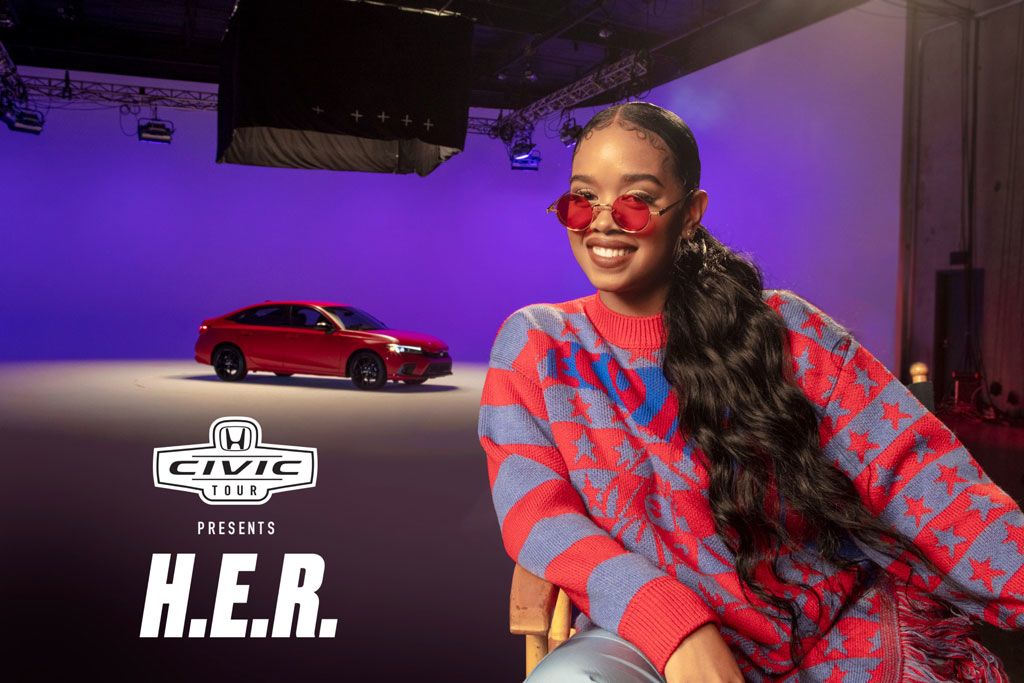 After pausing its long-running Civic Tour in 2019, Honda was set to bring it back last year with the kind of big-name music star that has headlined the multi-city tour for years. But Honda had to cancel the 2020 event as the pandemic struck, robbing the automaker of a valuable marketing tool to reach young buyers.

Now Honda is bringing it back, in virtual form, with a two-date concert series headlined by H.E.R. and livestreamed for free on the Twitch channel of concert promoter Live Nation. The first show on April 28 comes at a precarious time: While brands have been backing livestreamed concerts for more than a year, there is rising evidence that virtual show fatigue is setting in, especially as higher vaccination rates mean more live concerts could be just around the corner.

“Zoom fatigue is very real in month 13 of widespread touring shutdowns, especially as a gradual return to touring is imminent,” says Andrew Hampp, founder of music marketing consultancy 1803 LLC, said in an email interview. “Viewers are tapering off to return to in-person gatherings within their vaccine bubbles, which is why weekend livestreams have been particularly hard hit these past few months vs. the early days of the pandemic.”

Advantages over other livestreams

Still, Honda’s Civic Tour has some advantages over other livestreams. For one, it’s a household name. The automaker ran the first in-person Civic Tour in 2001 and over the years has headlined it with big-name talent, including Maroon 5, OneRepublic, Nick Jonas, Demi Lovato, Black Eyed Peas and One Direction. (The 2020 tour was supposed to be headlined by former One Direction member Niall Horan, until COVID shut it down.)

“We have some equity in the name of Civic Tour,” says Meliza Humphrey, senior manager of automotive marketing for American Honda Motor Co. The brand, she says, has a “following of people looking to see when the next Civic Tour is going to be and who the artist is going to be.”

The last tour came in 2018 and starred Charlie Puth. Honda put it on pause in 2019 “as we worked to assess and enhance our overall music portfolio,” according to a spokeswoman.

Hampp notes that with its return, the Civic Tour is “now the longest-running branded tour platform currently in operation, following the 2018 cancellation of the Vans Warped Tour, which ran from 1995-2018 and was the largest touring music festival of any kind.”

As Honda moves to a virtual show this year, the brand is trying to raise interest by touting it as a high-tech “mixed reality” affair that blends live-action footage with virtual effects. The performance will include Civic imagery, while H.E.R. is expected to use her songs to tell a story about reaching certain career milestones, Humphrey says.

Honda is also banking on drawing auto enthusiasts, and Civic superfans in particular, by using the April 28 show to give the public a look at its all-new 2022 Honda Civic. The sedan has a bit of a cult following; it is the third-most Instagrammed vehicle in the world, according to the brand, which cites a ranking published at highsnobiety.com.

The economy-minded Civic also serves as Honda’s gateway to first-time buyers and the Gen Z audience as a whole, making the 2022 launch a critical event for the automaker.

Honda first teased a prototype of the new Civic late last year during a special episode on Twitch’s “Honda Head2Head” channel, which has carried the automaker’s name since it debuted three years ago as the first and only auto-branded gaming channel on the Amazon-owned streaming platform.

The Twitch reveals of both the prototype, and now production model, is an example of how automakers are changing tactics amid the pandemic, which has cut them off from in-person events that are typically used to create buzz about new models.

For Live Nation, the Honda partnership could give it a boost as it seeks to navigate out of rough times. The company’s concert revenue plummeted from $9.4 billion in 2019 to $1.5 billion last year, while its sponsorship and ad revenue dropped from $590 million to $204 million, according to its full-year earnings report.

Honda has not revealed details for the second and final show for the 2021 tour, except that it will include a “remix” version of H.E.R.’s April 28 performance and a yet-to-be-revealed second entertainer.