Bofferding urges people to ‘Drink in the Boff’

It’s not easy breaking through in the beer category these days, with hundreds of craft beers filling store shelves across America. So Bofferding, a 255-year-old brew from Luxembourg, is hoping a little nudity will help it stand out. A self-described “cheeky” campaign features naked people posing in the outdoors. It’s called “Drink in the Boff.” Get it?

Print and digital ads by Milwaukee ad agency BVK were shot in Wisconsin locations “that reinforced the all-natural product benefit and also had aesthetic similarities to Luxembourg,” according to a brand representative. Bofferding claims “100% natural ingredients.”

Of course some publishers, like Facebook, would not accept the ads with nudity. So Bofferding had a little fun with that, creating a censored version. 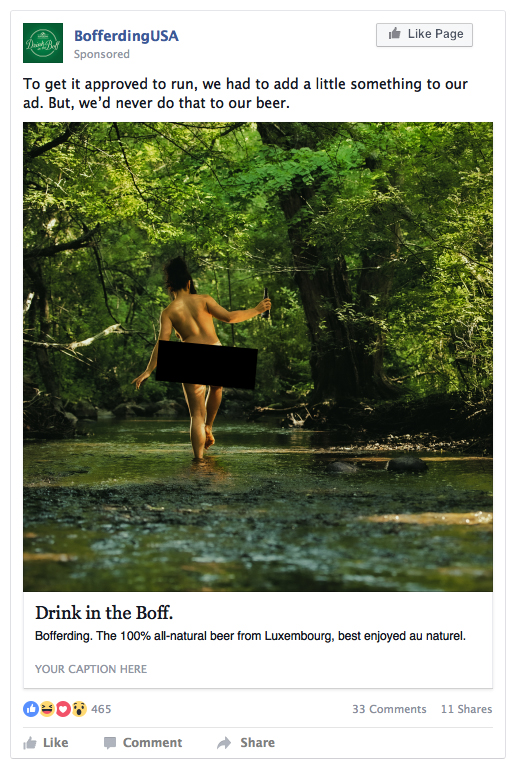 A seltzer audible
Anheuser-Busch InBev, whose Bon & Viv hard seltzer remains far behind White Claw and Truly in the sizzling category, is using its expensive National Football League sponsorship to try and catch up. The brewer, which normally uses its Bud Light brand in NFL marketing, is adding Bon & Viv to its football mix, calling it “the first and only Official Hard Seltzer of the NFL.” A new digital ad features ESPN personality Adam Schefter, who tweeted out the spot today to his more than 7 million followers. (Based on some of the replies, some of those followers would prefer he stick to reporting trade scoops.)

Update: @BONandVIV is now the Official Hard Seltzer Sponsor of the NFL. Want to make that clear. #ad pic.twitter.com/udJji3EDGT

The ad is part of a larger campaign that targets White Claw with videos showing people taking lie-detector tests. Participants are offered $1,000 if they can prove they like White Claw’s “Pure” variety more, without lying. And, you guessed it, the brand says, “out of the 50 polygraphed, only four people were able to show that they honestly prefer White Claw Pure.”

Of course, Bud Light will be doing plenty of NFL advertising, including trying to capitalize on last year’s “victory fridge” viral hit, which involved unlocking beer-stocked refrigerators in Cleveland bars after the long-struggling Browns got their first win.

This season, the brand is putting the fridges up for sale at  “B.L. & Brown’s Appliance Superstore” in Cleveland, which will be open from Sept. 3-4. Proceeds to go the “Browns Give Back” charity. To plug the store, Bud Light will run an ad on Cleveland TV starring WWE personality, The Miz.

Listen to Lulu
Lululemon is getting into the podcast game with Sweatlife Podcast, a weekly series that will include interviews with athletes and activists. The clothing brand partnered with Makers, a subsidiary of Verizon Media, on the offering, which follows in the footsteps of other retail brands, such as Coach and Chanel, that are trying podcasts. Lululemon’s first guests are Jess Sanchez, founder of Santa Isla, a jewelry retailer, and Corey Rae, an activist and the first openly transgender woman to win prom queen, according to a release. The Canadian activewear company has been expanding its offerings in recent months even as it tests out new forms of marketing like the audio series. In April, it began selling self-care products such as deodorant.

Would you buy this?
Skittles “Dips” are hitting U.S. shelves.

New Skittles 🌈 £1 @asda @skittles Super excited to see these in the uk, couldn’t wait to see how they compare to the original/no shell ‘our favourite’ but these are definitely worth trying especially if you like yogurt! It gives them a creamy experience like the ice cream sticks and we loved it 🥰

Number of the week
66 percent: amount of North American consumers who will try new products from beauty brands that are “natural,” according to a recent Ipsos survey on the future of beauty.

This might be the easiest way for me to get my hands on a @PopeyesChicken Sandwich. Thanks @LinkedIn. pic.twitter.com/JVFnDprdBw