With the economy on the upswing and the coast seemingly clear following the financial crisis, JP Morgan Chase launched a campaign last May around the tagline "So you can" under its first chief marketing officer, Claire Huang. 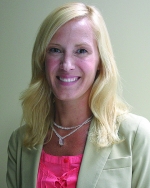 But after 2013 ended with a flurry of settlements with regulators that added up to more than $20 billion for the year, Ms. Huang, who joined from Bank of America in September 2012, is out and the largest U.S. bank is turning to longtime insider Kristin Lemkau to steer its image.

Ms. Lemkau, named chief marketing officer on Jan. 7, knows Chase inside out and has seen it through difficult times. She started at a predecessor firm of the bank in 1998 and was chief communications officer before her appointment -- a position she's going to retain. She has worked on the consumer bank and the investment bank sides, bringing PR, marketing and branding experience. The mother of two was previously responsible for corporate branding and employer branding (employee recruitment) for the whole firm andserved as CMO for the investment bank during the financial crisis until 2010.

"The thing I'm most proud of there was repositioning and rebranding JPMorgan," said Ms. Lemkau, 46. "At the time, we had a lot of brand confusion and messiness. We worked hard to build out the brand value propositions and identities of JPMorgan and Chase separately." For example, she divorced the Chase logo from JP Morgan's to more clearly separate the brands' identity.

In her new position, Ms. Lemkau will oversee brand strategy and advertising, sponsorships, market research and event marketing. But, given the bank's run of bad press, her PR skills may end up being the most useful.

"They're pretty well suited with a corporate communications person [as a new CMO]," said Jim Garrity, CEO of marketing consultancy firm BridgeTwoWorlds and former CMO at Wachovia. "Reputation management is key and so is experience in damage control."

Ms. Lemkau said it's too early to talk about whether and how the company's marketing strategy may change. "The businesses will really dictate the marketing strategy," she said. "There's work to do to invest in the Chase brand overall."

JPMorgan Chase's marketing spend had been declining. It spent about $2.35 billion in 2011 on total marketing, according to Ad Age's DataCenter. Nearly $556 million of that was spent on measured media for the Chase brand, according to Kantar Media, but the measured total fell to $376 million in 2012.

The new CMO, who lives in Rye, N.Y. and calls herself a diehard Red Sox fan, also plans to focus on digital and online marketing, including social media, according to an American Banker article. But the bank will understandably remain cautious around Twitter. In November, the bank became the target of mockery on the social-media site after it asked people to send questions and comments to an executive using the hashtag #AskJPM. The planned Q&A was quickly aborted. "Tomorrow's Q&A is canceled. Bad idea. Back to the drawing board," the bank tweeted.