KFC becomes the Netflix of chicken wings with $75 subscription offer

With 'seasoned tickets,' 500 KFC fans can get 10 big weekly wing order—cue the antacid 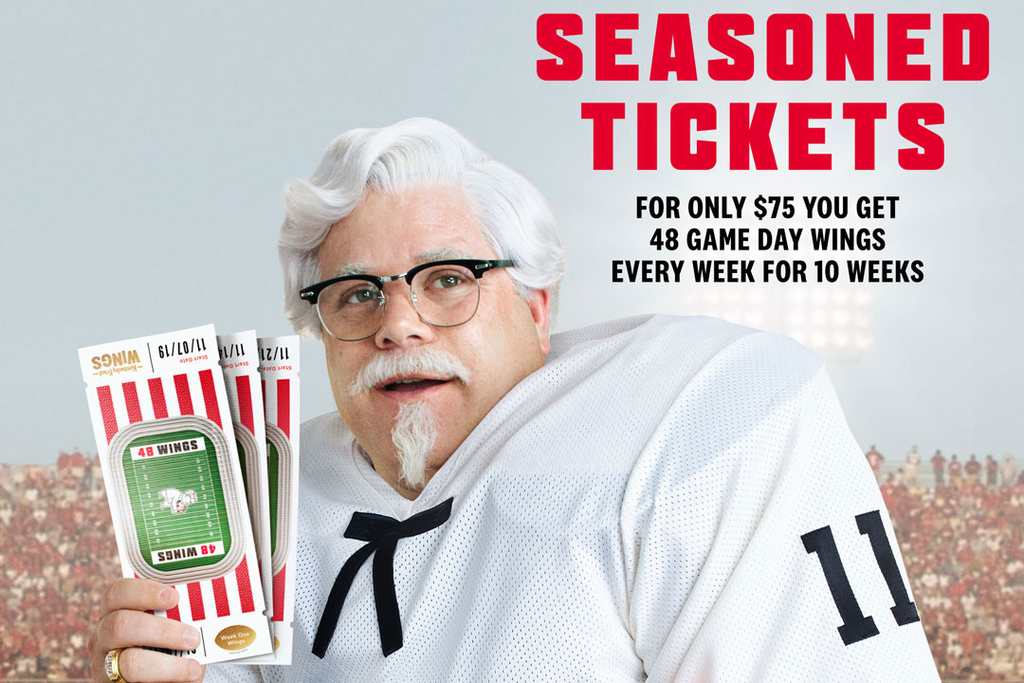 KFC has cooked up a $75 offer to promote its wings that suggests the American consumer’s love of subscription services knows no limits.

Starting today, KFC will sell up to 500 of its $75 “Seasoned Tickets” on StubHub. The passes, described by KFC as smelling like fried chicken, give each buyer a weekly order of 48 KFC chicken wings for nine weeks, and a final order of 96 wings in the 10th week.

The deal, which seems a bit like the fast feeder’s version of Netflix or Birchbox, sounds financially sound on paper. Each order of 48 KFC wings usually costs $36.99. Each subscriber gets 528 wings — a $406.89 value – for just $75, delivery included.

Even so, who wants to eat — and hopefully share – chicken wings every single week for 10 consecutive weeks?

That said, it is football season. Few foods other than pizza seem to be as synonymous with sitting on the couch and watching other people run and sweat. This is likely to be one of those offers that, like Olive Garden’s annual Pasta Pass, quickly sells out.

“Fans will be salivating over this unbeatable game day delivery offer,” KFC U.S. Chief Marketing Officer Andrea Zahumensky said in a statement. Meanwhile, StubHub CMO Olivier Ropars called it the kind of offer “that only StubHub and KFC can exclusively curate like this.”

It’s your turn, Chick-fil-A and Ticketmaster.

For KFC, offering a wing subscription is one way to try to stand out in what’s becoming an increasingly competitive fried chicken category. Popeyes got plenty of attention for its chicken sandwich, which is set to return to the national menu at some point after selling out in August, and industry leader Chick-fil-A continues to open locations at a rapid clip. KFC says “Seasoned Ticket” holders can vary their flavors, choosing from unsauced wings or one of three sauces: Nashville hot, Buffalo or honey BBQ.

KFC already announced a broader offer to promote the wings when they were added to the chain’s permanent menu on Oct. 10. Online orders of $12 or more include free delivery through Nov. 24.